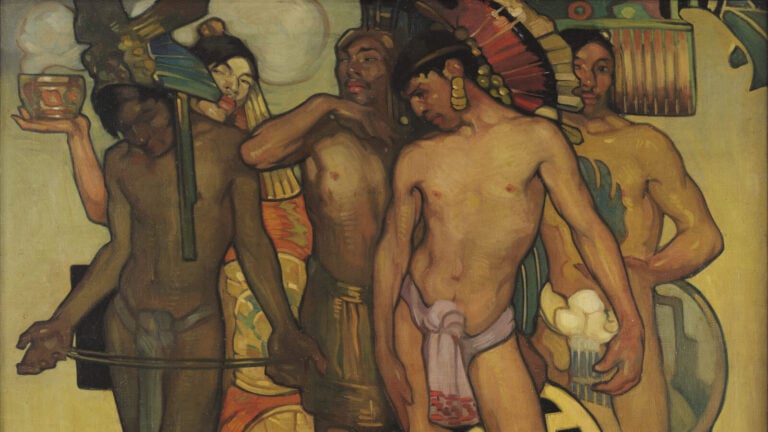 Saturnino Herrán’s Our Ancient Gods is a masterful painting of Mexican Modernism from the early 20th century. It evokes the strength, dignity, and beauty of the Pre-Columbian people who fill Mexico’s lengthy history before the Spanish invasions of the 16th century. Herrán painted Our Ancient Gods as a champion of indigenismo, which is a movement promoting the elevation and respect of Indigenous people and culture. Herrán was a founding member of indigenismo and Mexican Modernism that laid the foundations for later and more famous artists like Diego Rivera and Frida Kahlo.

Saturnino Herrán was commissioned in 1914 to create a set of three murals, known as a triptych, to adorn the walls of the Palacio de Bellas Artes (Palace of Fine Arts/National Theater) in Mexico City. His three murals were to glorify Mexican heritage, with one panel focusing on Mexico’s Pre-Columbian legacy. Our Ancient Gods is a small oil study in preparation for the large fresco mural. The grand mural derived from Our Ancient Gods was the only one of the three murals to be completed before Herrán’s untimely death in 1918 from gastric complications. He was only 31 years old. Despite his short life and unfinished commission, Herrán left Our Ancient Gods as a masterpiece of singular beauty.

The oil on canvas painting is quite small at only 3.3 x 3.7 ft (101 x 112 cm), with the five figures roughly at half life size. The resulting mural is doubled in proportion, resulting in life-size figures on the National Theater’s walls. Saturnino Herrán uses West Mexican men as his models for Our Ancient Gods because of their strong Indigenous and ethnic facial features. The locals around Xochicalco, a Pre-Colombian archeological site, are especially popular with Herrán because of their strong Teotihuacan, Maya, and Matlatzinca ancestry.

The composition definitely reflects Herrán’s mature later style with its somber and earthy colors. His bright and vivid colors of earlier works are abandoned for more muted nuances. However, the muted color scheme does not diminish the work’s impact. Actually, the sober coloring allows the sensual and languid lines of the figures to be more easily admired. The handsome warriors are lean and lithe with their firm muscles. Their heroic and erotic bodies stand in pleasing poses with a slight tension of impending action. They are not entirely relaxed, but they are not entirely tense. There is a sense of action and inaction blurred through their placid faces but flexed muscles.

Saturnino Herrán was only 29 years old when he completed Our Ancient Gods in 1916. However, after 15 years of practice and performance, Herrán became a master of disegno (drawing). Since the Italian Renaissance, disegno and colore have been at the heart of an artistic debate that began with the careers of Michelangelo and Titian. Is it better to create a painting through disegno, like Michelangelo, who used strong lines and contours; or is it better through colore, like Titian, who used strong colors and shading?

Herrán evidently follows disegno with his strong black lines outlining his figures and objects. The outlines are thick and bold while still being fluid and sinuous. The lines create a very illustrative work similar to the graphic designs Herrán created for books, magazines, and stained glass. Herrán’s formal training as an illustrator and draughtsman is clearly evident in its artistic influence.

The painting is full of images appropriate to members of the Pre-Columbian elite, such as the steaming cup of cacao, gold earrings, red feathers, and leather sandals. Only the most privileged people in Pre-Columbian societies could afford and wear such items. Herrán therefore evokes the images of Pre-Columbians who would have been socially, politically, and economically important.

These are lost peoples mostly unknown to history due to the destructive invasion of the Conquistadores. Therefore, while European aristocrats have painted portraits surviving through the centuries, the Pre-Columbian aristocracy are imageless and forgotten. Hence, Herrán addresses this cultural annihilation by giving homage to Pre-Columbian culture. His extensive use of Indigenous motifs, cultural richness, and powerful style all elevate these Pre-Columbian figures to almost godlike status. They are the venerable and worthy forgotten ones. They are Our Ancient Gods.