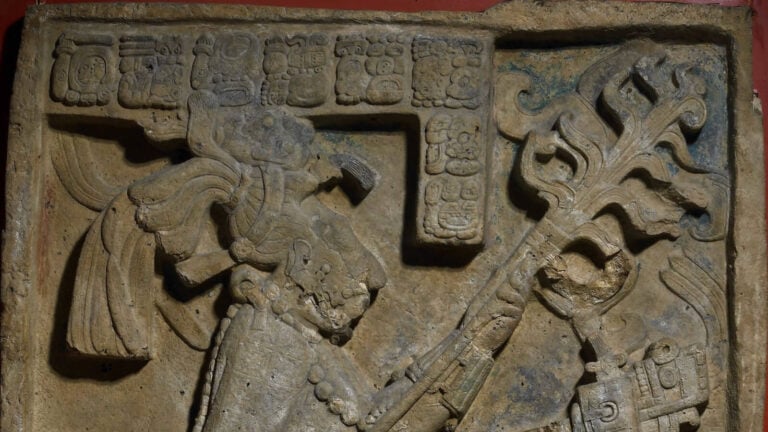 Yaxchilán Lintel 24 is an iconic image of Pre-Columbian art. It easily represents the vitality, mystery, and fascination surrounding the Mayan civilization. It intrigues with its beauty and brutality. It is fierce and fabulous.

Yaxchilán is a ruined and ancient Mayan city. It is situated on the Usumacinta River in southern Mexico by the Guatemalan national border. During the Mayan Classic Period (300–900 CE), Yaxchilán was one of the most powerful cities within the modern Mexican state of Chiapas. It dominated the local area with its political power, economic strength, and social prestige. War, trade, and art were its tools and methods. Yaxchilán Lintel 24 is an example of its artistic domination and prominence.

The lintel image measures 43 in (190 cm) high, 31 in (78 cm) wide, and 2 in (6 cm) deep. It is carved from soft limestone found locally in the Usumacinta River area. It is a masterpiece of Mayan art and originally adorned Structure 23, believed to be a temple, in the city limits of Yaxchilán. The lintel was initially set above the temple’s southeast doorway until it was removed and joined the British Museum’s collection. Traces of red and blue paint can be found throughout the image and indicate the lintel was originally brightly colored. The most vibrant paint was the blue hue, modernly referred to as Mayan Blue, that was made from heating clay soil (palygorskite) and indigo plants. Therefore, how the lintel appears today is a faded version of its earliest condition.

Yaxchilán Lintel 24 features two figures: a man on the left and a woman on the right. The man is King Itzamna Balam II, also known as Shield Jaguar. He ruled from 681 to 742 CE and stands in profile facing right. He wears a Sun god pectoral on his chest, an elaborate headdress of feathers on his head, and holds a long flaming torch in his hands. The torch implies the scene is taking place at night or within a darkened interior chamber.

Above and to the left of Shield Jaguar are Mayan glyphs, a form of hieroglyphic writing where symbols represent words and ideas. It is similar in concept to the famous ancient Egyptian hieroglyphic. The first two Mayan glyphs in the lintel’s upper left corner date the event occurring in the lintel’s scene. While the lintel was created between 723 and 726 CE, the scene celebrates October 28, 709 CE. This 14+-year-old scene celebrates the birth of a son belonging to Shield Jaguar, and also the astrological alignment of the planets Saturn and Jupiter.

The female figure on the right side of Yaxchilán Lintel 24 is Lady Xoc. Her name and titles are identified in the Mayan glyphs to the far left of the image. She is the principal wife of Shield Jaguar, and she sits on the ground facing in profile to the left. She wears a huipil, a sleeveless woven tunic, which is still worn by many modern Mexican women. Like her husband, she too wears a Sun god pectoral on her chest, and an elaborate headdress of feathers on her head. However, she is also adorned with jewels and performs a bizarre performance of self-mutilation!

Held in the hands of Lady Xoc is a barbed cord which is probably a rope studded with obsidian shards. She is pulling the sharp cable through a small hole in her tongue. As the obsidian shards pass through her tongue, more and more blood is released, running down her face and collecting in a bowl on the floor beside an open codex, the ancient ancestor of modern books. This horrific bloodletting ceremony was intended to induce hallucinations. Not depicted in Yaxchilán Lintel 24, but in its neighboring Yaxchilán Lintel 25, the bloodletting must have worked as Lady Xoc envisions an ancestor spirit emerging from a serpent’s mouth.

Yaxchilán Lintel 24 is a remarkable image due to Lady Xoc’s participation in the ritual. It is very rare in Mayan monumental art to depict women participating in important Mayan rituals. The majority of Mayan images feature male rulers and warriors. Therefore, a noble lady in ceremonial bloodletting is exceptional! Could Lady Xoc become the Mayan Mona Lisa?