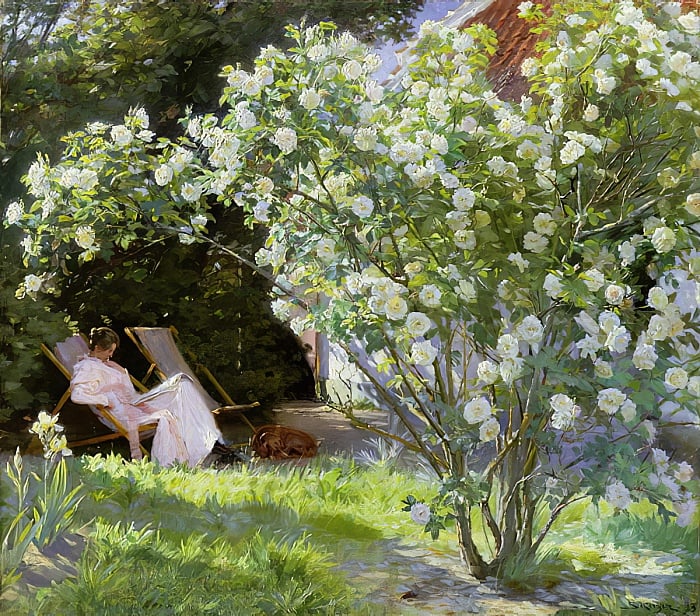 To help fight off the quarantine blues, here’s a guide to some of the most beautiful gardens in art. Both art and the outdoors offer solace and a calmness that cannot be matched. They are proven to help with general well-being and mental health-related issues. And they also offer us a sense of serenity and optimism that cannot be matched.

As many of us are not able to step outside to soak up the beauty of gardens during this time, this selection from the world of fine art will offer a solution. Let’s go for a walk in 10 of the most beautiful gardens depicted by the likes of Van Gogh, Klimt and Monet.

This whimsical triptych painting, split across three hinged panels, uses three garden scenes as metaphors for moralistic issues. Painted between 1490 and 1500, Bosch uses each panel to tell a different story and illustrates these with fantastical figures and surreal creatures. Hell is shown on the right, which presents the fate of humanity overcome with passion and pleasure. Paradise is represented on the left with a depiction of Adam and Eve, which alludes to love. And so, this leaves the garden of worldly pleasure to take center stage. The psychedelic imagery of this wild scene presents lovers and love-making in a lush garden full of sins, greed and lust. When the two side panels are folded shut, a grisaille picture of the Earth on the third day of Creation is shown. Currently displayed in the Museo del Prado in Madrid, this is the Dutch Painter’s most iconic work.

2. The Artist’s Garden at Giverny by Claude Monet

Next, we have Monet, one of the key founders of French Impressionism. He spent many years of his life in the tranquil Parisian suburb of Giverny. Wanting to create a picturesque oasis in his own back garden, he planted beautiful flowers, weeping willows, installed a pond and built a small wooden bridge. This creation was a constant source of inspiration that he decided to paint throughout his career. In this work, the deep blues, reds and purples that fill the canvas. These colors communicate his vision of nature’s beauty whilst the blooming irises represent the vitality of nature within this garden. Meanwhile, traces of white and blue in the background show hints of the artist’s house. This sumptuous painting offers an idyllic escape from the concrete jungle and is reminiscent of French summers gone by.

English landscape painter of the Romantic tradition, Constable painted this view of his father’s flower garden from his parents’ country house in Suffolk. Using pinpoint strokes of color to delicately capture the flowers, this painting shows the archetypal English country garden. An ode to the beauty of his homeland, he once wrote: “ I should paint my own places best”. With a real affection and adoration of his home, he paints the light shining across the fields and the brightness of the sky, filled with fluffy clouds, to depict the peacefulness of the English countryside. The onlooker is at once filled with a calmness and tranquillity that only a country garden can provide.

As an admirer of French landscape painter Charles-François Daubigny’s work, Van Gogh set out in early 1890 to see his home and garden. Located in the small village of Auvers-sur-Oise just outside of Paris, this is the first of three paintings Van Gogh painted of the garden. However, as he had no canvas with him, he painted the sketch on a tea towel, which is now in the Van Gogh Museum. He then made two larger paintings of the Daubigny garden on canvas. Later in 1890 Van Gogh died at Daubigny’s house in Auvers. This garden painting was one of his last pieces of art.

Now we turn to one of the first Expressionists and a member of the German Expressionist group Die Brücke, German-Danish painter Emil Nolde. Nolde was key to the early 20th century exploration of color. Both Emil and his wife Ada set up residence in the village of Notsmarkov located on a small Norwegian island in 1903. It was here that Nolde first started painting nature. His garden was one of his most beloved projects, which he captured so vividly in 1908 in this painting. The glowing reds, purples and turquoises of the picture vibrantly depict the happiness and pleasure he found in nature. He has also captured Ada in the background who serenely hangs out the couple’s washing. This painting perfectly reflects the simplicity and calm that can be found outside in one’s garden on a quiet, sunny, summer afternoon.

6. Woman with a Parasol in a Garden by Pierre-Auguste Renoir

With delicately painted flowers and shrubs, this painting invites the onlooker to take a walk with the protagonists. Renoir, the notable French Impressionist painter, presents a woman shading herself with a parasol. Next to her, a man leans down, presumably to pick a flower for her from the overgrown garden. The garden is blooming and represents love, vitality, abundance. It is also the perfect escape from the bustle and confusion of the city. Contrary to popular belief, this work was not painted in the countryside, but at Renoir’s garden at his house in Montmartre.

Art Nouveau painter, Klimt, painted his garden with luminous colors to evoke a sense of happiness and cheer. The bright yellow sunflower petals combined with the striking reds, blues and whites of the other flowers contrast with the deep greens of the surrounding shrubbery. As a result, this work beautifully presents the vivacity of his garden. Again, we are offered an escape from day to day city life. Thank you, Klimt, for giving us a summer utopia bounding in life and optimism of better days to come.

8. The Garden at Les Lauves by Paul Cézanne

Post-Impressionist French painter Cézanne, built a studio for himself in 1903, in which to work. This land was in Les Lauves, near his hometown of Aix-en-Provence. He worked there until his death in 1906. That same year, he painted one of his last works, The Garden at Les Lauves. Working in the style of Cubism, this mesmerizing garden captures the deep purples of the lavender and the greens of the fields, so characteristic of Provence. The abstract patches of color anticipated an era of artistic work much before Abstractionism arrived. His deep resonance with, and appreciation of, nature shines through in this work. He urges the viewer to step inside and let the beauty of the natural world engulf us.

9. The Gardens at the Sorolla Family House by Joaquin Sorolla

Spanish painter Joaquin Sorolla y Bastida was famous for effortlessly capturing the bright, sun-washed Spanish landscape. Born in Valencia, he later moved to Madrid in. He lived there in a large townhouse, which, after his death, was converted into the Sorolla Museum. The house was surrounded by a truly beautiful garden which he painted many times. This particular painting, completed in 1920, uses pale pastel colors to capture the dappled light and also the pleasure he found in his garden. As the light filters through the trees, the wicker chair look particularly inviting, as a retreat from the midday sun.

10. Roses or The Artists Wife in the Garden by Peder Severin Krøyer

Danish-Norwegian painter Peder Severin Krøyer was a prominent figure in the artist group, Skagen. Famous in the late 19th century, this group consisted of Swedish, Norwegian and Danish artists. These artists were based in the picturesque Danish fishing village of Skagen and used styles similar to the French Impressionists. Krøyer delicately captures his wife dressed in white reading a newspaper under a blossom tree in their garden in Skagen. He uses pale colors, light and shadow to create a carefree and light-hearted effect. He subtly invites us to rest upon the couch and smell blossom’s scent on a warm spring afternoon.

If you enjoyed the most beautiful gardens in art, you may want to read: