The Peacock Throne of Shah Jahan 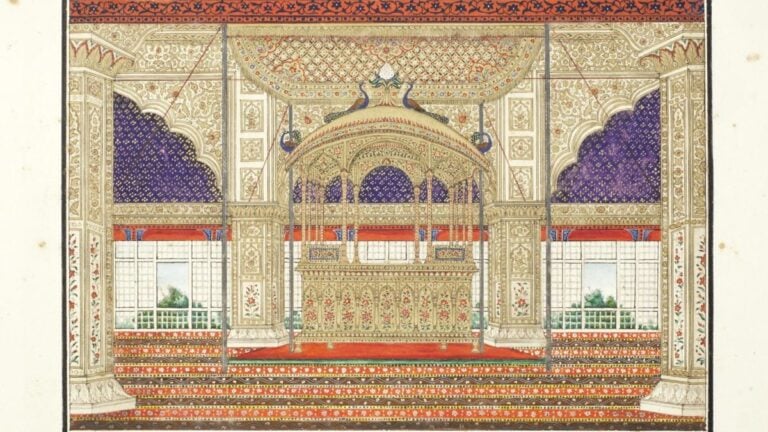 The iconic Peacock Throne or the Takht-i-taus was the greatest accumulation of precious gemstones in the 17th Century. Commissioned in 1628 by Shah Jahan, this exquisite artifact serves as yet another reminder of the extravagant Mughal era. Although the coveted throne was dismantled and lost to history, its legacy continues through writings, historical records and artist renditions by first-hand witnesses of its unparalleled splendor.

The Peacock Throne was commissioned in 1628 by the Mughal emperor, Shah Jahan on the day of his coronation. Shah Jahan’s legacy also includes a seventh wonder of the world, the Taj Mahal. Skilled artisans and craftsmen took 7 years to complete the production of the throne and it is believed to have cost twice as much as the Taj Mahal. The Throne naturally occupied a prominent place in the Mughal palaces and evidence indicates that it was frequently moved between the royal courts of Delhi and Agra. It served as a grandiose display of the extravagance of the Mughal treasury to the world. More than 2500 lbs. of gold and 500 lbs. of precious gemstones were embedded in the Throne. One of the more detailed assessments of the Throne was made by the French jeweler, Jean-Baptiste Tavernier. Tavernier was a personal guest of Shah Jahan’s son Aurangzeb who visited the Mughal court in 1665.

Description of the Throne

The name of the Throne was derived from its design that featured bejeweled peacocks. Legendary gems such as the Timur ruby and the Akbar Shah, the Jahangir as well as the Koh-i-Noor diamond made up the peacock’s composition. A verse praising the achievements of Shah Jahan was engraved in emerald on the Throne. An estimated 116 emeralds, 108 rubies, and several precious diamonds, sapphires, and pearls were used in its creation. There were silver steps leading up to a 6 ft by 4 ft platform. The platform was elevated about 25 inches high over four gold encased feet. An arched silk canopy covered the platform and was supported by 12 gold columns, which were decorated by bands of pearls that weighed 6 to 10 carats each! Tavernier found many of the emeralds to be flawed but was very impressed by the pearls and deemed them the most valuable part of the Throne.

The Peacock Throne remained in possession of Shah Jahan’s descendants and subsequent Mughal Rulers until the year 1739. During the reign of Muhammad Shah, the Mughal empire was in decline and Nadir Shah of Iran used this opportunity to invade the Mughal capital city of Delhi. Muhammad Shah was easily overthrown and relinquished his wealth to the invaders. Nadir Shah returned to Persia with the Peacock Throne as well as many other artifacts from Muhammad Shah’s treasury. The appropriation of the Throne was a powerful symbol of the Shah’s victory over the once-powerful Mughal dynasty.

Destruction of the Throne

In the year 1747, Nadir Shah was assassinated by his own bodyguards and Persia descended into chaos. In the anarchy that ensued looters ransacked the palace and dismantled the Peacock Throne. The gemstones embedded in the throne were likely divided and sold by the looters leaving no conclusive trace. While there have been many rumors over time of findings of parts of the Throne or its gemstones, there hasn’t been much in the way of irrefutable evidence.

Following the collapse of Nadir Shah’s regime, the Koh-i-Noor diamond was acquired by the general Ahmad Shah Durrani, who went on to establish the Afghan Empire. The diamond was worn by Durrani and his descendants in a bracelet until around 1809 when it was handed over to Ranjit Singh, the founder of the Sikh Empire. When the Kingdom of Punjab was annexed by the East India Company in 1849, the diamond along with Ranjit Singh’s other assets made its way into the British coffers. The Koh-i-Noor is now an iconic part of the British Crown Jewels. This impressive and highly sought-after stone started out at a whopping 186 carats, though after changing many hands and re-cutting, the most recent weight is estimated at about 105 carats. Though undeniably an impressive gemstone, it is hard to fathom that it was merely one of the many that lay embedded in Shah Jahan’s magnificent Throne.

The splendor of the original Peacock Throne continued to enthral both Mughal and Persian rulers in the later years. With designs reminiscent of Shah Jahan’s original Throne, later monarchs of the Qajar and the Pahlavi dynasties of Iran created grand thrones that were also called Peacock Thrones. Over time the term Peacock Throne came to refer to the Iranian monarchy as a whole rather than a particular Throne.