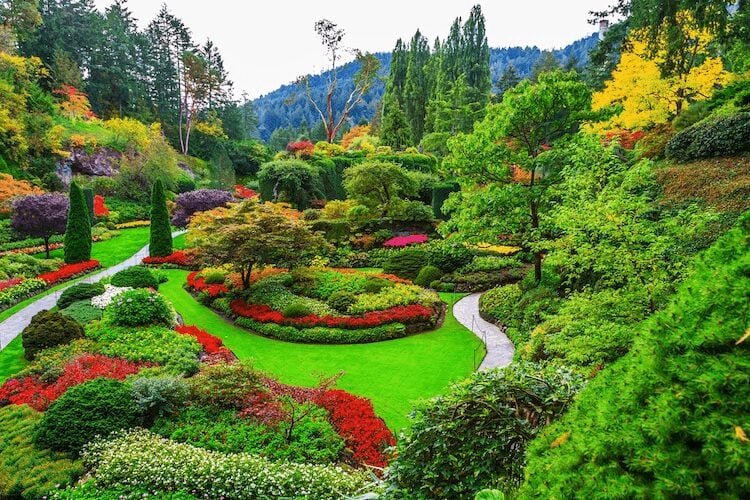 Whether colors represent environmental phenomena, human history, or personal freedom, there are canvases that exist beyond an artist’s studio. Mountains, lakes, buildings, and gardens are some of the most colorful places in the world. We hope this collection of colorful gardens and parks inspires you to visit them and create your own!

If you are curious about the sound of trees, come to the Bamboo Forest in Arashiyama district of Kyoto. The famous Tenryuji temple nearby is an important local shrine and the bamboo grove is very popular with visitors. The tall bamboo stalks sway to a meditative and surreal soundscape when winds pass through them. The magical beauty of this place is further enhanced when sunlight filters through the grove at the right angle. The Bamboo Forest is also known as the Arashiyama Bamboo Grove and Sagano Bamboo Forest.

The Butchart Gardens on Vancouver Island commenced in 1904 when the Butchart family moved there to build a cement plant. The area of Tod Inlet was rich in limestone but Jennie Butchart already had a plan for the quarry in her backyard. She planned a sunken garden and the results are for everyone to enjoy! Between 1906 to 1929, the garden expanded to include the Japanese Garden, the Italian Garden, and the Rose Garden. The garden remains with the Butchart family and is a National Historic Site of Canada.

Flowers may not bloom all year round but when they do, nothing can match nature’s grand show! Keukenhof Tulip Garden is the most colorful place on earth between March and May every year. Also known as the Garden of Europe, Keukenhof Tulip Garden has seven million flower bulbs of 800 different varieties. Although mainly known for tulips, the garden has other flowers such as hyacinths, daffodils, lilies, roses, carnations, and irises. Every year the garden has a different theme and it has delighted visitors since 1950.

Park Güell is an important landmark and a public park in Barcelona. Eusebi Güell, the donor of the project, commissioned Antoni Gaudí, a renowned architect and the face of Catalan modernism, to build a suburb of luxury apartments for the rich. The project began in 1900 and finished in 1914. Contrary to the original plan, the government took over the park and opened it to the public. In 1984, the park was declared a UNESCO World Heritage Site.

A lot has been written about the meaning behind Gaudí’s symbolism from religion to politics, but it has remained a mystery so far. Undoubtedly, the park is a riot of colors and it seems Gaudí was having fun letting his imagination run wild!

This fairytale-like castle is the Pena Palace or Palace of Pena, situated on the Sintra hills in Portugal. The palace has two wings: the former Manueline monastery of the Order of St. Jerome, and another wing built in the 19th century by King Ferdinand II. It was a former Hieronymite monastery of Our Lady of Pena, built by King Manuel I in 1511. King Ferdinand II acquired the monastery in 1834 and also ordered the renovations.

The pink-colored building is the former monastery, while the yellow building is the New Palace, a later addition. King Ferdinand II was highly influenced by German romanticism, as is evident in the architecture of the Palace. Moreover, the Pena Palace is a National Monument and UNESCO World Heritage Site as of 1995.