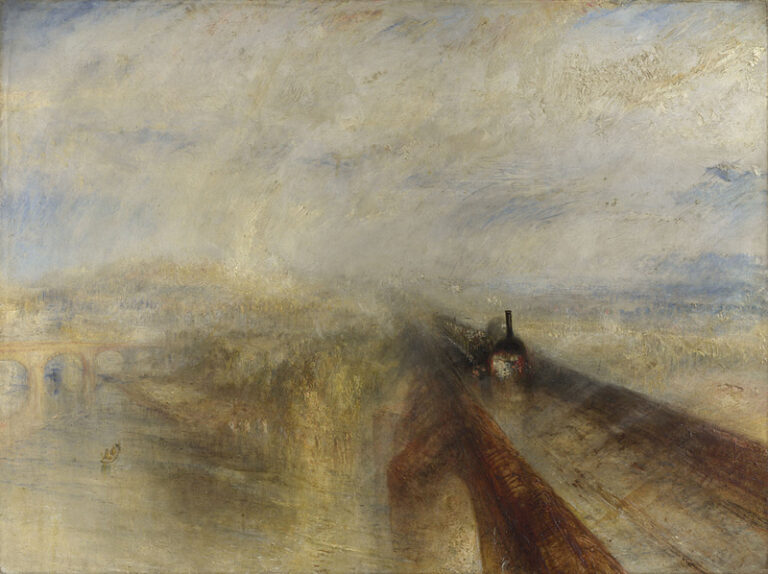 The Industrial Revolution brought profound changes into the world, re-designing its shape in the most hardhearted of ways, never experienced before by humanity. As per usual, art was a witty spectator of these changes and faithfully reported them for posterity to admire and ponder over. Come read about industrial landscapes from around the globe and what they represent.

Historically, this global phenomenon sparked in England at the end of the 18th century and it lasted for about 160 years. Some first, some later, the rest of the world eventually joined in. Historians split it into two distinct periods: a First Industrial Revolution and a Second one. The First harbored the invention of machines and tools, cement, iron making, gas lighting, electricity and steam power. Meanwhile the Second brought refinement of these innovations plus the mass production and use of chemicals. The zeal and enthusiasm towards the many possibilities ahead were great at the time.

Despite the immense potential, there was also a quick development of a counter-trend among the intellectual and artistic circles. The Romantics, headed by artists and poets such as William Blake and Caspar David Friedrich, were horrified by what the Industrial Revolution entailed. The Romantic movement was openly hostile towards this reality’s make-over. Distraught by the ugliness and misery of it, it turned to nature and ancient, evocative beauty. That said, I will not explore this movement here any further. Nonetheless, should you wish to read more, follow this link to some fine articles about Romanticism. Now, moving on to our industrial landscapes…

If there is a genre that actively incorporated the modern into its production, letting the Industrial Revolution in, it is Realism. This movement made the fall from the empyrean skies to the crude, hard-working earth its own journey. Mythology with all its divinities and heroes started to lose ground on which to frolic, while artists began to pay increasing attention to an entirely human-made, grinding world. In the 1800s, Realism observed and depicted a brand new register of images. They were rigorously drawn from everyday life, made of tangible things, small and large, shiny and dirty, material, detailed, functional.

The palette was ‘slightly’ affected and generally turned towards earthy, subdued colors. Like in the dark oil on canvas above, by Lionel Walden. The fact that he painted this industrial landscape at night didn’t help. Despite the proliferation of new, prodigious machines rotating, melting, pressing and tilting, one could object that the representation of very technical, lifeless objects could dull the senses in the long run, even if shown within a landscape.

Nevertheless, Realist painters took it upon themselves to represent the Industrial Revolution with accuracy and an abundance of details. They recognized it was a happening that well deserved to be recorded, regardless of the lack of poetry. I am grateful for the truthful depiction we get from their observations of the shifting in their time. Besides, some painters infused their scenes with a beauty they couldn’t help but include. I suppose this beauty was already there, in their eyes. So the world just looked poetic anyway, regardless of the subject. An example is J. M. W. Turner and his landscape Rain, Steam and Speed, shown below. I mean, it is about a train crossing the English river Thames, but it looks very evocative indeed.

The train embodied pretty much all the novelties there were in the industrialization process, out in the open, rather than in factories and plants. Machinery, power, movement of people, goods, and construction materials at speeds that was unimaginable before. A connection formed between places, as remote as possible, via miles and miles of railway. The dynamic subject also attracted many artists who thought locomotives and stations worthy of their time. To name just one, Claude Monet painted buzzing junctions several times, peering through steam and cinder. If you are interested, you can read more about travel-related art in the Fabulous Railway Station Paintings from the Golden Age of Train Travel article.

I can only imagine the awe that the sight must have kindled. What did it feel like to spot the very first train passing by at full speed, for people who were witnessing industrialization? Possibly what it would feel like for us to see a real light-speed spaceship or a fully functioning teleportation pod.

The print below belongs to a Japanese artist recognized as a master in representing the shift of his country from a “floating”, unspoiled world to a modern power at play. Kobayashi Kiyochika decided to capture the ground-breaking historical event of the first Japanese Industrial Exposition on paper. It was a very successful event! It attracted 450,000 visitors in the 102 days of its duration and displayed 84,000 innovations.

I am playing a bit with the terminology here. If you look at this print, representing the exposition’s settings in Ueno Park in Tokyo, you see trees, hills, clean water, a clear sky. Well, it fits perfectly with the description of a landscape! Admittedly this is not industrialization at its most sooty stage. However, dear readers, it represents the start of Japan’s rush towards a model of living and business-making started by Western countries. So much development deserved anything but its own fair. European countries had been holding expositions sporadically, then more and more regularly, since the late 1700s.

Once again, if you look at the image of this next industrial landscape you might think I am cheating. Fret not, as I am being accurate and truthful. Besides, should I have shown you only chimneys, smoke, and ashes? In all honesty, I could have not. This is much more beautiful. I am going to tell you why this picture of La Tour Eiffel and Champs de Mars constitutes a perfect example. I am even showing it to you via a photograph! A further ‘modern contraption’, quintessentially realistic, that split the figurative world in two.

First of all, the tower was built from 1887 to 1889, nestled between the first and second Industrial Revolutions. Mind you, iron was no news in the late 1800s. However, the amount of metal that was extracted and molded at the time was unprecedented. Furthermore, without the fast-paced production, which was only possible thanks to the new machinery used in factories, it would have taken forever to complete it (figuratively)! Instead, the Eiffel Tower was ready to feature as the grand portal to the 1889 World’s Fair, as designed by the French civil engineer Alexandre Gustave Eiffel.

This globally acclaimed monument is 324 metres tall and is constructed of a staggering number of iron segments, that is 18,038 pieces joined together by 2.5 million rivets. Each and every part was created to fit impeccably, if anything short of perfection arrived on the premises, the piece was sent back to the factory to be refined. As nearly 30,000 visitors arrived in flocks to see it, we can say that it was an instant success with the public.

However, it met a certain resistance from a number of intellectual figures. They heatedly declared their indignation towards the “useless and monstrous […] giddy, ridiculous tower”. The declaration, published by a French magazine in 1887, gathered 300 signatures of prominent men. Artists, writers, and painters fought the inclusion of this new symbol of modern times to Paris’ beloved, pre-industrial skyline. Had they succeeded in altering the project, we would have never known this exact architectural wonder, sky-scraping over Champs de Mars. Imagine that!

At the beginning of the 1800s only about 3% of the population lived in cities. As you either already know, or can guess, the Industrial Revolution changed that for good! It was a steady movement of people, amassing just outside the pretty, historical centers. It also created new environments inhabited by a new working class. As laborers left the countryside where they were no longer needed, the outskirts of cities buzzed and gained new, interesting traits to observe, study, and paint.

Inevitably, this meant a new kind of landscape building up all around the major cities, and people, moving through it, operating it, living in it. To show you just a couple of these new industrial scenes, I have picked French post-Impressionist George Seurat’s Bathers at Asnieres (above) and Afternoon. Porta Romana’s Workshops, by Italian Futurist Umberto Boccioni (below). They are both full of light, both airy and colorful. They suggest a manageable coexistence between humans and the human-made. It is monumental and still in Seurat’s painting, while dynamic and populated in Boccioni’s.

These landscapes incorporate people, new buildings, and smoking chimneys as part of a new reality that the artists witnessed. Undoubtedly, the depiction of some boiling-hot, loud, busy factory’s interior would look less serene. Industrialization is there, more prominently in Afternoon. Porta Romana’s Workshops, but it does not look brutal, nor dull. By now it must be no secret to you that I have a predilection for the brighter side of this coin!

The Industrial Revolution left us a legacy made of steel, iron, and cement. Nowadays, countries that followed a different path are fighting for their right to catch up with the lifestyle of the Western world, despite the warnings around pollution and unsustainability. Meanwhile, the already industrialized nations are desperate to reverse the trend towards the eradication of a natural, green dimension.

Indeed, what we inherited from the 19th and 20th centuries and from the Industrial Revolution can be considered controversial under many aspects. How inhumane it looked at times, even though perfectly engineered and executed. Posterity will perhaps be wise and prompt in identifying what is best to keep and what to discard of the reality that will be received from us, towards where to steer the next revolution and its landscapes!

Fernando Botero once called himself “the most Colombian of Colombian artists,” as the majority of his works explore traditional themes...