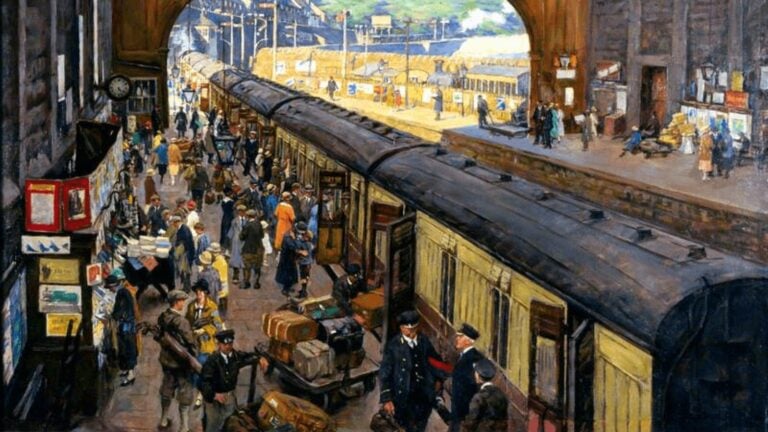 Once upon a time, train travel was the height of fashion. That’s why the second half of the 19th century and first few decades of the 20th century are considered the Golden Age of Train Travel. The train represented an exciting new way to get places faster and more easily than ever before. Railway stations sprang up all over the world. Built using novel new materials like cast iron and large sheets of glass, these railway stations could be simultaneously elegant and industrial – fashionable and forward-thinking all at once.

Artists around the world were just as taken with trail travel as everybody else. Many chose trains and railway stations for the subjects of their paintings. Here are some of the best railway station paintings from the Golden Age of Train Travel.

The steam engine was originally invented in England, and all things railroad are still hugely popular there. So, it’s quite fitting that many British painters have portrayed the nation’s great railway stations. England is home to famous stations, such as Paddington Station (home of the beloved character Paddington Bear), King’s Cross Station (site of Platform 9 3/4 in the Harry Potter series), and St. Pancras Station.

The Railway Station by William Powell Frith (1818-1909) shows a crowd of well-dressed Londoners wait for their trains inside the elegant, massive arches of Paddington Station’s train shed. This is a very characteristic work for Frith, who specialized in painting huge Victorian crowds in fashionable settings. He chose to include himself and his family in this among the travelers. They appear just to the left of center, saying goodbye to their younger son on his way back to school. Mrs. Frith is kissing her son’s cheek, so she’s the easiest to spot.

View of York Station, by Herbert William Garratt (1864-1913), presents a contrast to Frith’s painting in every possible way. While Frith showed the excitement and human element of train travel, Garratt focused on its industrial, mechanized side. This painting looks out from inside a locomotive approaching York Station. The train shed is just visible in the background, but we mainly see the bank of signals directing the conductor into the station. This technological focus is fitting for Garratt, who is remembered primarily as a scientist and the inventor of new kind of locomotive. Unsurprisingly, many of his paintings depict trains.

France produced some of the world’s best-known railway station paintings thanks to the Impressionists. Impressionism was all about depicting modern life (and also beautiful landscapes), so trains and railway stations made perfect subjects for Impressionist paintings. Claude Monet (1840-1926), who is known for painting the same subjects over and over, did a series on the Gare St-Lazare in Paris. His depictions of the Gare St-Lazare frequently show trains entering and departing the train shed, letting out steam that fills the pictures. Neo-Impressionist Maximilien Luce‘s sharp-edged painting of another Parisian railway station at first appears very different than Monet’s; however, it’s also about modern life and atmosphere.

American Impressionists loved making railway station paintings, too. Philadelphia-born Colin Campbell Cooper (1856-1937) seems to have particularly enjoyed them. He painted many stations in New York and Pennsylvania, as well as numerous other landmarks throughout the world. In fact, almost all of his paintings depict architecture in one form or another. Chatham Square Station is undoubtedly the prettiest and most exciting of his many railway station paintings I considered for this post.

Chatham Square is in New York City’s Chinatown district, but sadly, this lovely elevated train station no longer exists there. However, I think that anybody visiting New York City a century later will still recognize all the the hustle and bustle of people waiting to board their trains.

Most of the world’s most famous railway stations are in big cities, but these aren’t the only places with train stations. Smaller towns, particularly out in the country, actually gained the most from the invention of train travel. Being on the train line put them on the map and allowed their inhabitants to communicate with the wider world far more easily than before. Edward Lamson Henry‘s Station on the Morris and Essex Railroad shows a small, timber railway station in New Jersey. Horse-drawn carriages drop off and pick up passengers, while passengers wait eagerly for a train arriving from the distance. Although the buggies and Civil War-era clothing make this image look dated, the scene isn’t all that different from what you’ll see at many local train stations today.

Spencer Gore‘s Letchworth Station shows a rural English station half a century later than Henry’s American version. His wonderful, colorful painting captures a cheerful day in a Hertfordshire town, with a rolling green landscape behind the locals waiting on the platform. It really looks like a place I wouldn’t mind getting off a train in! Gore (1878-1914) was a founding member of the Camden Town Group, British modernists who painted contemporary life in Post-Impressionist high-key colors.

Hungarian Modernist Tivadar Csontvary Kosztka (1853-1919) wasn’t particularly popular during his lifetime, but he’s greatly respected in Hungary today. His painting of Eastern Railway Station has a subtle, Avant-Garde magic that I find very compelling. It contrasts the inviting lights of the train station with the dark, cold night shown outside. Only a few horse-drawn carriages populate the left side of the painting. It’s easy to imagine that we’re seeing the viewpoint of another carriage arriving to pick up or drop off a passenger.