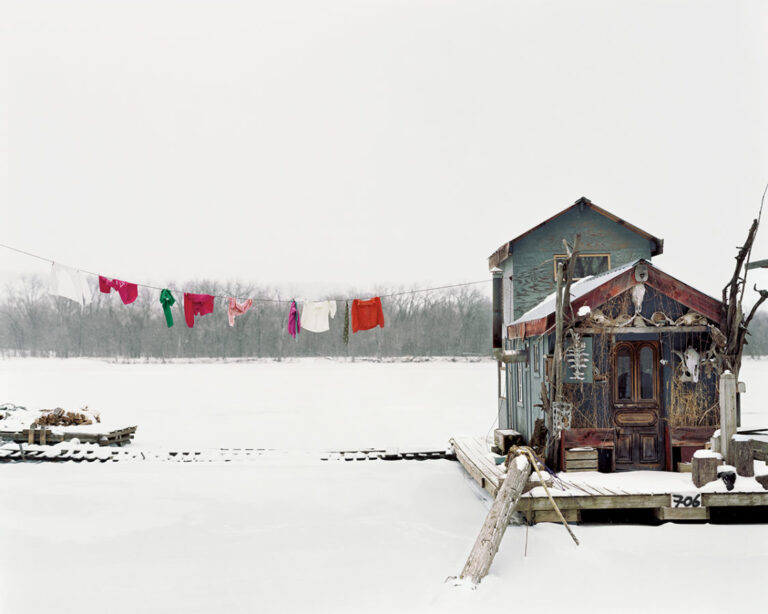 Alec Soth, Peter’s houseboat, Winona, Minnesota, from Sleeping by the Mississippi, 2017, courtesy of the artist and MACK

Alec Soth is a contemporary American photographer who so far has specialized in capturing his native US. Based in Minneapolis, Minnesota, he travelled across all states to meet and photograph Americans and their surroundings. In his latest publication, however, Alec Soth’s American landscapes expand on a global scale to encompass also people’s homes and lives.

This is how Soth calls his project that involved travel across his native country of America. In 2004, he travelled along the country’s longest river, the Mississippi, and over a period of five years, he was documenting people living by the river’s banks. Then, in 2006 he published a book dedicated to the town of Niagara, while in Songbook from 2015, he took to the streets to photograph American social life in every state. According to the New York Times critic Hilarie M. Sheets, he did extremely well at “finding chemistry with strangers,” particularly “loners and dreamers”.

Then, a Sabbatical from Work and Life

In 2016 Soth felt something that changed his life from day to day. He travelled to Helsinki and after a flight, still jet-lagged, he sat by the lake. And then, he experienced something that he himself described as “a full-on mystical experience”, which brought him to a realization that everything in the world is connected. He made a radical shift in his life and for a year lived in a farmhouse near his own home in Minneapolis, meditating and pursuing a private kind of art making, rarely photographing.

I Know How Furiously Your Heart Is Beating

After a year, he felt ready to return to work with new energy and new approach to photography. He would arrange portrait sessions with strangers in their homes, using natural light. Usually his sitters were alone, but sometimes he’d even photograph just their empty houses. The title for this latest project (published in March 2019) was taken from Wallace Stevens’s poem The Gray Room, which as Soth has said, reflects “the beauty and mystery that can happen in a brief encounter in an interior space”, that he has tried to capture with his photographs.

Although you sit in a room that is gray,
Except for the silver
Of the straw-paper,
And pick
At your pale white gown;
Or lift one of the green beads
Of your necklace,
To let it fall;
Or gaze at your green fan
Printed with the red branches of a red willow;
Or, with one finger,
Move the leaf in the bowl–
The leaf that has fallen from the branches of the forsythia
Beside you…
What is all this?
I know how furiously your heart is beating.

To see more of his photographs, visit his website: https://alecsoth.com/photography/

Genius of All the Art Forms: Mikhail Vrubel’s Fantastic Worlds

The place of Mikhail Vrubel (1856-1910) in Russian art is exclusive and isolated. Legends already began to form around Vrubel during his lifetime. He...