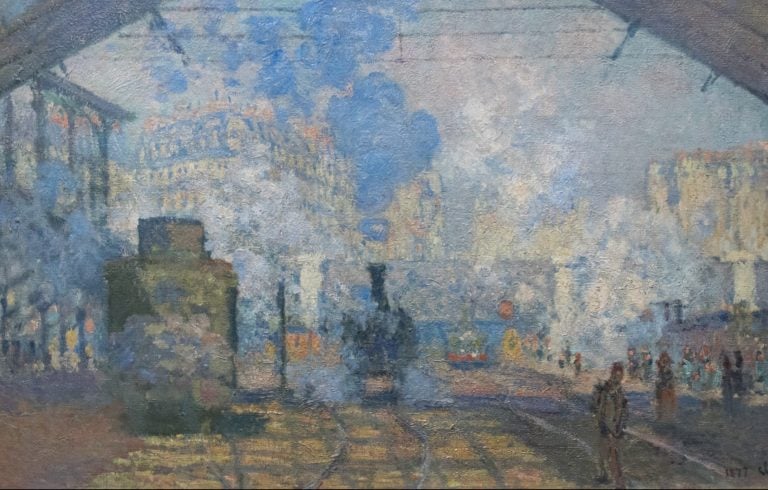 Between 1853 and 1870 Paris has been renovated and modernized by Georges-Eugène Haussmann, commonly known as Baron Haussmann. This prefect of the Seine Department of France was chosen by Emperor Napoleon III to carry out a massive urban renewal program of new boulevards, parks, roads and railway stations. One of them was the Saint Lazare train station, which became a frequent subject of Claude Monet’s paintings.

Via this train station Claude Monet, then yet unknown painter commuted to Paris from Argenteuil, a rural province outside Paris where he lived with his family. Monet, a few years before showing his famous Impression, Sunset at the first Impressionist exhibition in 1874 was amazed by this symbol of modernity and industrialization. In 1877 he rented a studio near the Gare Saint Lazare.

The artist always wanted to be remembered as a painter of the “modern” world. He painted a dozen canvases that attempt to portray all facets of the station. They all have similar themes – the play of light, the smoke of the train shed, the billowing clouds of steam, and of course, the locomotives. Of these 12 paintings, Monet exhibited between six and eight of them at the third Impressionist exhibition of 1877, where they were among the most discussed paintings exhibited by any of the artists.

Monet faced harsh criticism, probably due to the fact that he showed the locomotives as the main subject, rather than as background elements. Four paintings in the set of 12, show the large and distinctive cast iron spans that covered the platforms. However, the other paintings show the exterior, the yards, workers, tunnels, switches, sheds, and engines of the station. But what Monet has never shown is the grand hotel, lavish entrance or sculpture of the station’s impressive façade. It never interested him.

In Interior View of the Gare Saint-Lazare, the Auteuil Line Monet renders the steam with a range of blues, pinks, violets, tans, greys, whites, blacks, and yellows. He also depicts the effect the steam and light has on the site – the large distant apartments, the Pont de l’Europe (a bridge that overlooked the train station), and the many locomotives – all of which peak through, and dematerialize into a thick industrial haze.

In the 1870s also the other major Impressionists including Caillebotte, Pissarro, Renoir, Degas, Guillaumin, Raffaëlli, and even Manet – had shown a steady interest in the railroad as a subject within their paintings of modern of life. For example, the Pont de l’Europe was painted by Gustave Caillebotte and presented on the Third Impressionist exhibition as well.

Monet’s paintings of the Gare Saint-Lazare are unique in the artist’s oeuvre and the series was one of his most famous series in his lifetime. As said by Émile Zola:

Monet is able to turn a normally dirty and gritty place into a peaceful and beautiful scene…You can hear the trains rumbling in, see the smoke billow up under the huge roofs…that is where painting is today…our artists have to find the poetry in train station, the way their fathers found the poetry in forests and rivers.

This is how the station looks like now – unfortunately not as spectacular as in the 1870s paintings.