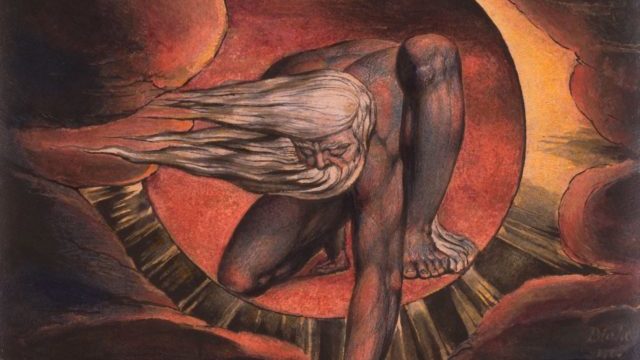 William Blake, The Ancient of Days, 1827, etching with ink and watercolour on paper, 232 x 120mm, The Whitworth, Manchester.

Tate Britain is the oldest of the United Kingdom's four Tate galleries, the others being the Tate Modern in London, Tate Liverpool and Tate St Ives. Tate Britain not only boasts an excellent permanent collection of British art, but also a series of world-class exhibitions. The William Blake retrospective is a prime example of this: After paying an entrance fee of just under £20, visitors are dazzled by the Romantic poet-painter's fantastical visions, the first of which is his Albion Rose.

Bursting with colour, this joyous image speaks of a time of revolutionary change: The United States of America was a newly independent nation, whilst France had just cast off the shackles of monarchy. It's a theme that occurs implicitly and explicitly in many of Blake's poems, such as America: a Prophecy. But what made Blake unique was his creation of an idiosyncratic mythology, with characters such as Urizen, a godlike being depicted in The Ancient of Days, which formed the frontispiece to Europe: a Prophecy.

At times, Blake's visions are nightmarish, as in The Ghost of the Flea, which looks a bit like a macabre remake of The Greatest Showman. Seeing these works up close, it can be surprising how tiny they are. Blake's famous poem and print The Tyger, for instance, is minuscule.

As Europe underwent an Enlightenment, Blake was attuned to the scientific and philosophical developments of the age, as works like Newton can attest to. It's a stunning blend of science and reason with fantasy and creativity. It's unclear what exactly is happening here, but it's certainly something profound and meaningful.

Although in his lifetime he was a marginal figure, viewed by some as crazy, William Blake has had an enduring influence on British and perhaps world art. After all, he was creating works of captivating fantasy long before J. R. R. Tolkien first put pen to paper. Blake's legacy can be felt in the works of artists such as Alasdair Gray (who passed away at the end of last year) and even in comics such as Neil Gaiman's The Sandman series. It was fitting, therefore, to see someone of Gaiman's and Gray's works in the exhibition gift shop.

You can see this exhibition at the Tate Britain until February 2nd 2020.

Birthday Edition of Blake’s “Songs of Innocence and of Experience”

Bible According To Blake