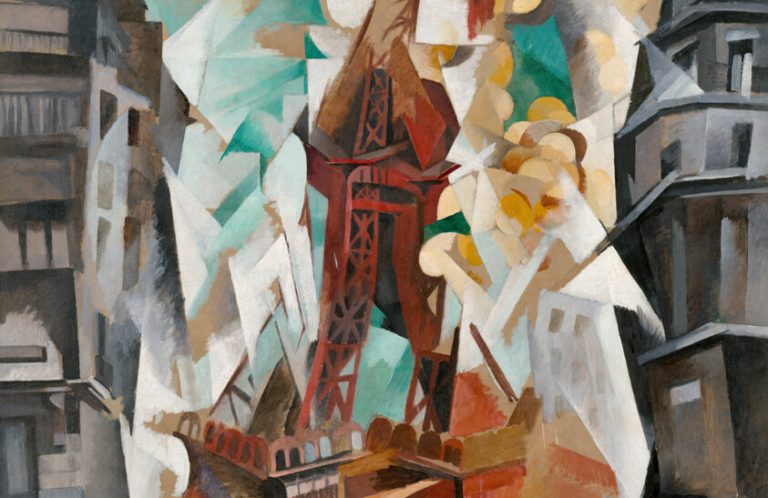 When people speak of Paris, images of Notre-Dame, Arc de Triomphe, and Musée du Louvre flash into the imagination. And for good reason, as they are absolute must-see sites. Fresh croissants, fabulous chocolate, and fine perfume fill the senses with pleasure as you peruse this lovely city. However, it is the Tour Eiffel, or the Eiffel Tower, that reigns supreme as the iconic image of Paris.

Robert Delaunay captures this celebrated structure in his painting, Champs de Mars: The Red Tower. The famous 19th century building is boldly interpreted through Delaunay’s eyes in a 20th century, Modernist perspective. The Eiffel Tower takes on new meaning, but remains the timeless classic we all still love and adore.

When Robert Delaunay began painting Champs de Mars: The Red Tower in 1911, the Eiffel Tower was only 22 years old. Therefore, it was still considered a new addition to the skyline of Paris. It was completed by the “Magician of Iron”, Gustave Eiffel, in 1889, and was to be revealed to the world at the Exposition Universelle, or World’s Fair. The Eiffel Tower was immediately striking as the world’s tallest structure, a title it held for 41 years until 1930. It is constructed of wrought iron and stands 1063 feet above the city. It was also a shocking example of the rising prominence of Realist, Rationalist, and Functionalist architecture that was spreading throughout the world. No longer was a building’s form and function hidden behind decorative façades. Now its structural integrity could be boldly displayed as part of its overall appearance. The Eiffel Tower was a massive symbol of the rapidly urbanized and industrialized society of Paris.

The 19th century was a time of massive changes, especially in Paris. For 30 years, Baron Haussmann was literally destroying and rebuilding history. Architects Henri Labrouste and Joseph Paxton were building skeletal, iron structures such as the Bibliothèque Sainte-Geneviève (1843-50) and the Crystal Palace (1850-51). The Eiffel Tower was the next step in this architectural progression towards modernism. Its open-frame body with iron girders was a dramatic departure from the Neoclassical styles of the early 19th century. However, despite its dramatic design and initial rejection by the Parisian “elite”, it quickly became a symbol of 19th century Paris. It stood for the city’s traditions, beliefs, hopes, and dreams.

Robert Delaunay’s Champs de Mars: The Red Tower may depict a 19th century cityscape, but not in the traditional 19th century style of painting. His painting is thoroughly Modernist and rejects conservative and realistic depictions of the Tower. He does not aim to portray it as the eye sees it, but to depict its essence, character, and form. It is a painting rejecting linear perspective and realistic shading and is not photographic in any sense. It embraces the dissection of forms, shapes, and colors by holding to most of the tenants of Cubism. This is an art form proudly supported by famous artists like Pablo Picasso and Georges Braque. However, Robert Delaunay is not simply a follower of Cubism. He embraces dramatic colors following the school of Orphism, which consists of fantastically vibrant colors. Cubism, however, tends to follow a more somber color palette of browns and blacks. Orphism holds hands with Cubism but is not married to it.

The Eiffel Tower was not always the bronze color it is today. It has been painted 18 times and in many colors including red-brown, yellow-ocher, and chestnut-brown. When Champs de Mars: The Red Tower was painted, the tower was red-brown, which is why the Eiffel Tower dominates the center of the canvas in its bold shades of red and orange. It sharply contrasts the grey and white buildings surrounding its base and flanking its sides. The homogeneous buildings act as a frame for the Tower, and this framing augments its importance in the scene. The Eiffel Tower is in fragments, a collection of colorful splinters; and like the shards of a broken mirror, the Tower’s pieces still retain some of their original character. We can tell that we are looking at the Eiffel Tower through the scene’s implications and not only through its actual appearance. The Tower’s shards loosely collect into a familiar outline while brackets and girders of its feet and body are loose and sporadic. Its platforms imply its stories, but they are tilted and unstable. Everything speaks of the actual Eiffel Tower without capturing its photographic appearance.

Robert Delaunay’s Champs de Mars: The Red Tower has a multitude of rhythms and patterns; such as the lines that repeat themselves throughout the scene forming sympathetic and antagonistic patterns. Similar colors are in harmony, while dissimilar colors are in dissonance. It is as though bright strokes break into a wide spectrum-like light that is passing through a glass prism. The diagonal lines of the Eiffel Tower repeat in the parallel lines of the blue sky, and these lines contrast with the vertical and horizontal lines of the surrounding buildings. The red and orange hues play among themselves creating depth and interest. The Tower’s colors also stand out against the somber and muted shades of the grey and white buildings. The grid of windows and ledges further add to the Tower’s dynamic structure. This, by far, makes the Eiffel Tower the most eye-catching element of the painting since it has so much contrast from its environment.

This important artwork also imparts a social timeline. When Champs de Mars: The Red Tower was completed in 1923, France was forever changed; World War I had ravaged humanity and taken countless lives. The Belle Époque or “beautiful period”, lasting from 1871 to 1914, was officially over; and a France of optimism, of peace, and of prosperity was killed alongside millions of soldiers during the war. A sense of innocence and naivety was lost, and a more savage and destructive world was revealed. Shell-shock was real, and it reverberated throughout the paintings of the period. The violent motions of shape and color chosen by Robert Delaunay in this piece reflect the social collapse of the old order. The Tower still stands in the painting, but it is broken and fragmented, just like post-WWI France. Like a favorite vase that is smashed and glued back together, post-WWI society could never be as it was before the war. Despite it appearing whole again, the cracks will always be visible and present.

Robert Delaunay painted Champs de Mars: The Red Tower during a period of great social, economic, and political transition. Architecture was rapidly evolving, society quickly changing, and countries swiftly rebelling. French Orphism and Cubism influenced Italian Futurists and German Expressionists. The Eiffel Tower had overtaken Notre-Dame as the symbol of Paris, and the Jazz Age had overtaken the Belle Époque. Change was the spirit of the age. Robert Delaunay’s Champs de Mars: The Red Tower is a masterpiece in capturing this spirit. It reflects on the past while it also views the present and hopes for the future. The Art Institute of Chicago is blessed to have such a great work among its collection. And you should view it the next time you are in the Windy City. You will not regret it.

Take a virtual trip to Paris: