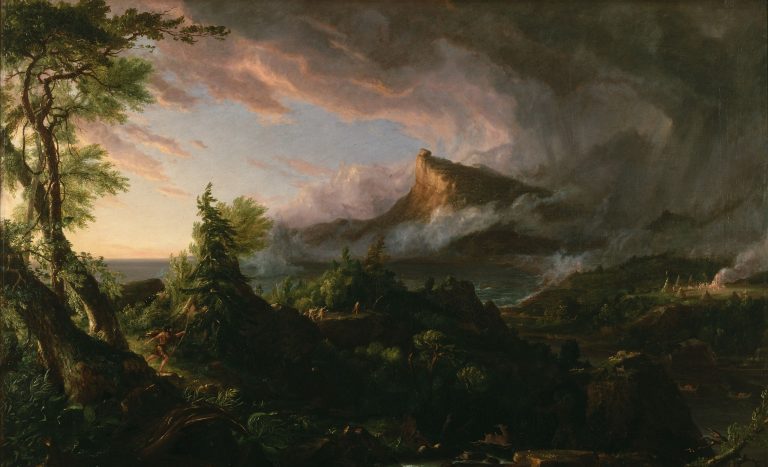 The Hudson River School was a uniquely American art movement – the first to develop after the country gained its independence in 1776. It was a painting style that celebrated the American landscape. During the mid-19th century, dozens of artists painted scenes throughout the United States and beyond.

Landscape painting already had a long history in Europe, but this American version was slightly different. This was because the American landscape, unlike the European one, was largely unaffected by humans at this time. Native Americans, who had already lived here for centuries, seem to have treated the land much more gently than the Europeans did.

The Romantic painting movement, which was in full swing in the 19th-century Europe, emphasized the emotional impact of ruins that dotted the European landscape, as well as the historical and literary associations of the land. North America had none of that. What it had instead was vast areas of pure, spectacular nature. Unlike in Europe, the land had not been exploited for large-scale human and industrial needs – yet.

The unspoiled landscape was a point of American pride, but it still wasn’t safe as the young nation became industrialized. Forests were cleared for timber and farmland, cities sprang up, miles of railroad tracks were laid down, and smoke from industrial chimneys started to appear on the horizon. The views shown in Hudson River School painting were already starting to disappear as the artistic movement gained hold.

Thomas Cole (1801-1848), the British-born artist who founded the movement, was troubled by this trend. He lamented the destruction in his 1836 Essay on American Scenery. Many people consider Cole to have been an early environmentalist. A deeply spiritual man who saw God’s hand everywhere in nature, Cole painted many allegorical and imagined landscapes as well as views of Europe and the northeastern United States.

Some artists also ventured out to western states like California, back when they were wild frontier territories. Thomas Moran (1837-1926) and Albert Bierstadt (1830-1902), in particular painted spectacular west-coast sites like Yosemite and Yellowstone. They publicized the area’s awe-inspiring beauty, giving Easterners a taste of what lay to the west. Their works also helped garner support for the National Parks Act in the latter part of the 19th century.

Not all Hudson River School artists limited themselves to landscapes within their national borders. Frederic Edwin Church (1826-1900) traveled to places such as the Middle East, South America, the Tropics, and the Arctic to paint some of the world’s most spectacular landscapes. Church was Cole’s student, and he was probably the most successful of all the Hudson River School painters. His giant works were rich in natural detail. He displayed his grandest canvases, including Niagara Falls and The Heart of the Andes, in single-painting shows in New York City and elsewhere. People lined up down the street to see his paintings for a small fee. In this way, Church was responsible for America’s first blockbusters.

In addition to the well-known artists mentioned above, dozens more – including several women – participated in this movement. Each artist had their own style or point of view. For example, Jasper Cropsey (1823-1900) became known as “The Painter of Autumn” for his scenes of brightly-colored autumnal foliage, while a slightly later generation of painters, called Luminists, focused on effects of light and often favored marine scenes.

Hudson River School paintings are quite plentiful. You can see them in most American museums, and they’re often the subject of special exhibitions. Unfortunately, they’re rarely shown in any great number outside the United States, with the exception of a 2018 Thomas Cole show in his native England.

Not only is it a meaningful and beautiful addition to the history of landscape painting, but it also shares the concerns of our day. Everywhere, people are spending more time worrying about human impact on the earth, talking about how to protect it, and debating the benefits of technological development over its costs to the natural world. The Hudson River School engaged with these same issues more than a century ago, so their work couldn’t possibly be more relevant today.