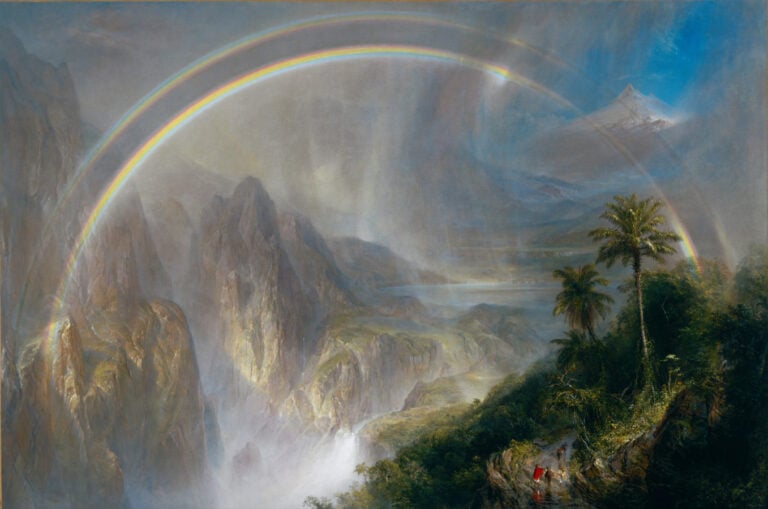 In our Masterpiece Stories series we have something truly beautiful for you. I want to discuss Rainy Season in the Tropics by Frederic Edwin Church, which for me is a painting of hope and new beginnings.

Frederic Edwin Church was a second-generation artist of Hudson River School. This landscape, despite being an imaginary and symbolic view, incorporates a number of scientifically accurate elements. The double rainbow that spans the canvas is notable for the reversal of the color spectrum that occurs in the second of its two bands (technically known as Alexander’s band), and Church’s meticulous depiction of it suggests that he may have consulted a scientific treatise when painting the scene.

Furthermore, the tropical fauna presented there is based on botanical sketches Church made while living in Jamaica. Church and his wife, Isabel, retreated to the island in 1865 after the deaths of their two children from diphtheria, but when they returned to the United States the following year, they were expecting a child. Many scholars interpret this painting as a reflection of Church’s renewed optimism, both about his personal life and about a spirit of national unity following the end of the American Civil War. You’ll notice a few pairs in this painting: the two travelers, the two palm trees, and of course, the two rainbows. I suppose you could also interpret the travelers as their children, entering a heavenly realm.

You can see this amazing painting at de Young Museum in San Francisco!