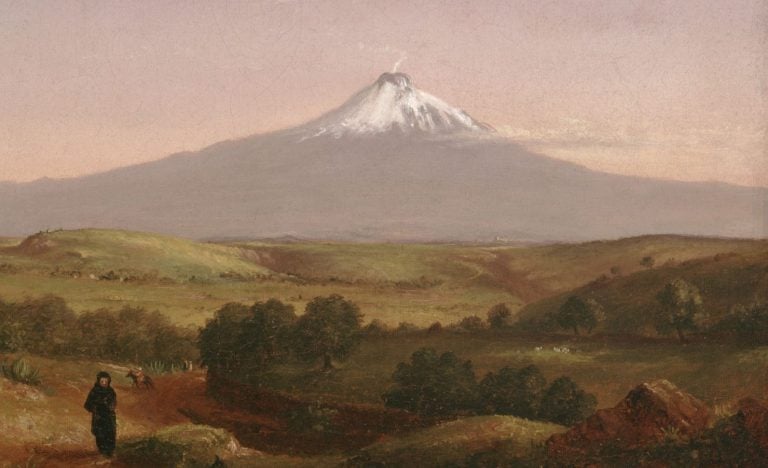 Louisa Davis Minot is known only through two paintings of Niagara Falls. They are spectacular and show that she was skilled and well-trained. Many artists painted Niagara Falls, and Minot’s hold their own against any of the others. She also wrote a vivid description of the Falls, which was published in North American Review in 1815.

Sarah Cole was the younger sister of Hudson River School founder Thomas Cole and a talented artist in her own right. The scenes she chose to paint were often similar to those of her brother, which isn’t surprising given that they were close and were known to have gone on sketching trips together. In addition to her own works, she also made some copies of her brother’s paintings.

Eliza Pratt Greatorex achieved great respect in American art and New York society alike. In fact, she was successful enough to be able to support herself and her young children through her art after being widowed in 1858. Greatorex painted scenes of the northeastern United States and of Europe. She was the first woman to attain membership in the National Academy of Design – showing the esteem in which she was held during her career.

Helen Mary Knowlton studied under French-trained landscape painter William Morris Hunt and eventually took over teaching his class at his request. She has also trained in Munich, Germany, which was popular at the time. Knowlton had a Luminist’s interest in showing lighting effects and an Impressionist’s loose method of handling paint. In addition to teaching and painting, she wrote extensively about art and was a longtime art critic for the Boston Post.

Laura Woodward was originally from New York, where she first painted and exhibited her work. However, she moved to Florida in the second half of her life, and that’s where she made some of her most compelling paintings. They show Florida’s landscape and foliage, and they’ve been credited with making people interested in traveling to Florida in the early 20th century. Her work also convinced Henry Flagler to establish the Hotel Royal Poinciana in Palm Beach. Though the scenery is very different between her northern and southern subjects, both share a vibrant color palette.

Mary Josephine Walters, the last female Hudson River School artist we will talk about, studied with the School’s leader Asher Durand, and their work has obvious stylistic similarities. She was a full-time professional artist and exhibited at major institutions like the National Academy of Design and the San Francisco Art Association. Her works present detailed views of scenery in New York’s Hudson River Valley. They often feature lots of foliage and beautiful effects of light.