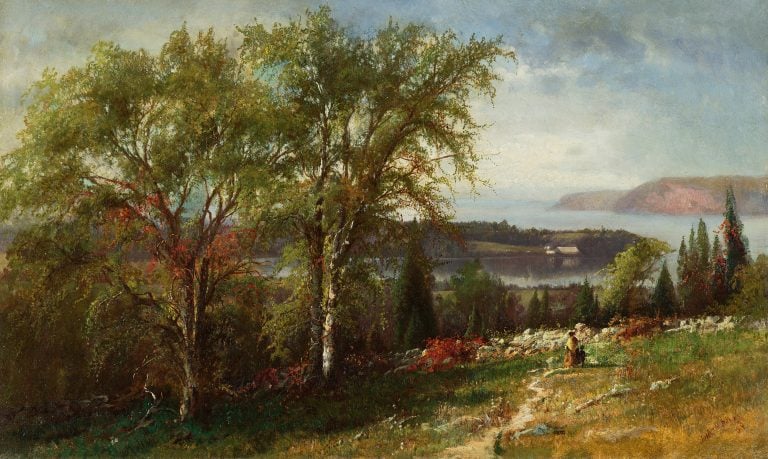 In the previous article on Hudson River School, I introduced six female artists of this important landscape painting movement in 19th-century America. There were so many talented ladies to choose from, that I couldn’t possibly feature all of them in one post. So here are five more women painters of the Hudson River School whose works you will enjoy!

Susie Barstow painted many landscapes during her well-regarded career, but unfortunately, few survive. She preferred to depict forests thick with foliage, often illuminated by radiant light. She traveled through harsh conditions to observe her scenes up close, climbing to the top of American and European mountains in the snow and ice. It’s difficult enough to imagine doing this today, never mind in the 19th-century wearing a massive skirt! Barstow’s hiking prowess attracted her much attention both in her day and now, as have the paintings she made of these sites.

Julie Hart Beers is sometimes credited as the only female professional Hudson River School artist. Of course, we know that’s not true! Nonetheless, she achieved a then-rare feat of maintaining a successful artistic career while married, and she used her art to support herself and her daughters after her first husband’s death. She often worked alongside her brothers William Hart and James Hart, who were also Hudson River School painters. Unlike some of the other women, we’ll talk about here, many of Beers’ vibrant northeastern landscape paintings survive today. They use rich colors and bold brushstrokes. In addition to working on traditional rectangular canvases, she had the unusual habit of painting on round panels.

Harriet Cany Peale painted a variety of different subjects and styles. She made detailed landscape paintings like Kaaterskill Clove, where she emphasized atmospheric effects such as fog. She also made portraits and still lifes in style inspired by old masters. As the second wife of Rembrandt Peale, Harriet was a member of America’s first artistic dynasty. The Peale family was full of skilled artists of both genders. Harriet was no exception, and that’s how she met her husband. The two of them worked and traveled together, and she often worked on reproductions of his most popular paintings. Her own works hang in several major American museums.

Fidelia Bridges was a commercially successful artist best known for her watercolors, especially of birds and flowers. These pieces were usually small but full of little details drawn from her close observation of nature. She frequently sold them to publishers to be printed in books, magazines, and cards. Bridges began painting in her 20s after befriending sculptor Anne Whitney. The two of them banded together with other female artists throughout their careers, sharing studios and visiting Europe together. Bridges was a member of the National Academy of Design and the American Watercolor Society – both prestigious institutions.

Elizabeth Gilbert Jerome had an evil stepmother who took some pretty drastic actions to prevent her from becoming an artist. So Jerome waited a few years, then pursued her art anyway. Like her eventual neighbor, Frederick Edwin Church, she made beautiful paintings of tropical landscapes. It’s nice to think that they had some sort of artistic camaraderie, but there’s no evidence to support this. Jerome gave up art for a while, but she took up miniature painting in her later years. She made hundreds of tiny works in the last six years of her life.

There were many more women who worked in the Hudson River School. We don’t know very much about many of them, but you can see their works at the links provided in the bibliography.