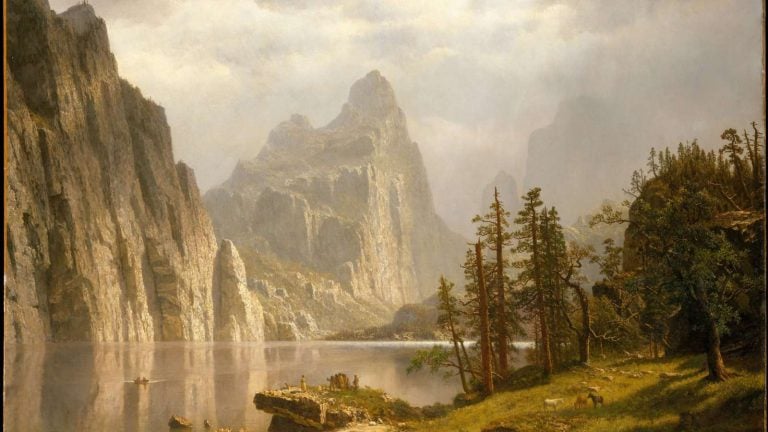 The US National Parks are natural and man-made monuments legally set aside for protection and public enjoyment. Yellowstone became the first National Park in 1872, while the park system as a whole began in 1916. Through their images of the American West, artists helped draw public support for conserving these beautiful places. Explore national parks landscapes with us!

When the United States acquired western territories like California and Colorado in the 19th century, they were sparsely-settled regions that the average American would never visit. At first, only brave explorers and enterprising pioneers journeyed out west. Fortunately, this group included some artists. Their paintings and photographs gave eastern city-dwellers captivating first glimpses of the natural wonders to be found out west. These images were important, because they generated popular support for preserving these landmarks.

Simultaneously, the environmental conservation movement was forming in response to concerns about how Americans were treating the nature around them. Although early America had been proud of its wilderness, industrialization had taken its toll nonetheless. It began in the east, but logging, mining, and railroads quickly threatened the wild west, as well. Advocates like John Muir and George Perkins Marsh and writers like Ralph Waldo Emerson and Henry David Thoreau called for a stop to environmental abuse. The conservation movement, aided by artistic images, inspired the creation of the National Parks Service.

Photographer Carleton Watkins (1829-1916) created some of the very first western images of national parks landscapes to make a national impact. In 1861, he took some of the earliest photographs of California’s Yosemite. His 130 pictures included 100 stereoscopic images that, when placed in a special viewer, gave a three-dimensional appearance. Watkins’s work introduced scores of Americans to Yosemite’s stunning geological and natural features. It also helped to persuade President Lincoln to sign legislation protecting the area in 1864. In the generations since Watkins, Yosemite has continued to inspire American photographers, including the celebrated Ansel Adams.

Soon after Watkins, German-born landscape painter Albert Bierstadt (1830-1902) journeyed out west, where he made a series of breathtaking landscape paintings. Just as Frederic Edwin Church‘s panoramas introduced American audiences to the Andes, so to did Bierstadt’s large-scale paintings bring the Rocky Mountains, Yosemite, and more to east-coast Americans. Also like Church, Bierstadt’s great national parks landscape paintings are highly-detailed composite images rather than faithful depictions of existing views. Bierstadt often included representations, albeit idealized ones, of the west’s original Native American inhabitants in his paintings.

The Hayden Expedition and Its Artists

In 1871, government geologist Ferdinand V. Hayden led a group of scientists, surveyors, and artists on an exploratory mission out west. The Hayden Expedition’s most notable destination was Yellowstone, a site that is celebrated for its geysers and other geothermal features. Thanks to the expedition, Yellowstone became the first National Park just six months later, on March 1, 1872. The paintings and photographs produced by the expedition’s official artists undoubtedly helped inspire Congress’ historic legislation.

British-born Thomas Moran (1820-1910) was the Hayden Expedition’s official painter. This largely self-taught artist conveyed Yellowstone’s natural beauty in paintings that are still celebrated today. Moran’s artwork was strongly influenced by the atmospheric effects of his artistic hero, J. M. W. Turner. Moran’s large-scale oil paintings of the west, like Bierstadt’s, are idealized rather than topographically precise, yet they still manage to capture the spirit of the sites. Moran later painted for Colorado surveys led by Hayden and by John Wesley Powell.

William Henry Jackson (1843-1942) also went on Hayden Expedition, as its official photographer. Following Watkins, Jackson was in the second wave of photographers to capture the American west. Pack animals carried the heavy photographic equipment that allowed him to create so many clear and powerful images. Jackson and Moran worked closely together and captured many of the same views.

Painter and lithographer Grafton Tyler Brown was one of the few commercially-successful black artists in 19th century America. Starting in the 1870s, he painted many of the great natural landmarks out west. His paintings of Yellowstone are most famous; these highly-detailed works are less romanticized and more topographically faithful than the paintings we’ve already looked at. Rather than introducing new viewers to the western landmarks, Brown’s work helped those who actually visited hold on to their experiences. His paintings and books of views were especially popular with wealthy tourists in the area.

Thanks in part to these pioneering American artists, and others just like them, more than 400 U.S. National Parks are now preserved for public enjoyment. Their national parks landscapes continue to inspire professional and amateur artists alike.