Ways in Which Art Can Fight Climate Change 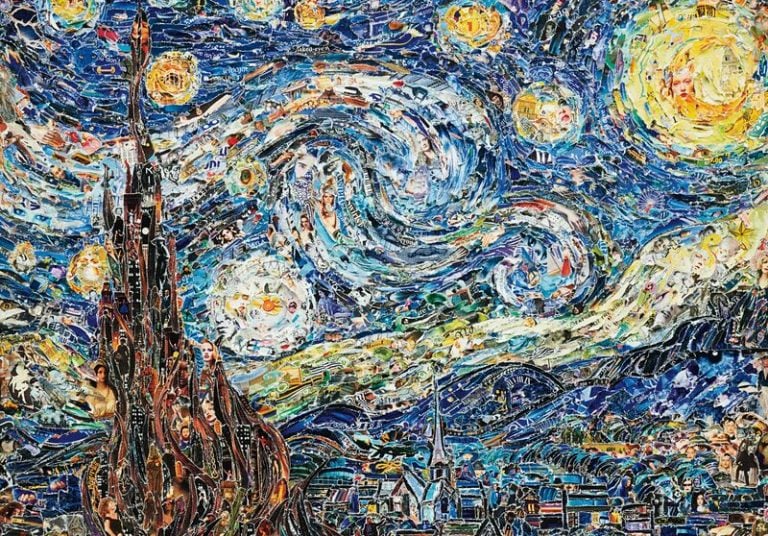 In the last few years people, especially the new generations, have raised their voices as they understood that there was not much time left to save their future. Scientists have warned us about the melting of glaciers, the islands of plastic in the oceans, the loss of entire ecosystems. But now we are experiencing the effects of climate change. The art world, too, has chosen to have a part in all this. Many artists, from sculptors to street artists, are finding new ways to combat climate change.

Vik Muniz is a Brazilian artist who makes art with the most unusual materials: old magazines, chocolate syrup, sugar, cotton, powder, and garbage. Muniz combines these components to recreate established works of art.

Then the artist photographs the composition and prints the pictures in a limited edition using the Cibachrome technique.

However, one of Muniz’s most interesting projects is Pictures of Garbage, which was the subject of the 2010 Oscar-nominated documentary Waste Land.

Muniz realized this project over two years with the members of the Association of Collectors of the Metropolitan Landfill of Jardim Gramacho, in the city of Duque de Caxias, site of one of the biggest open-air landfills. The artist heard the stories and took pictures of these people, who made a living by collecting and trading recyclables they found in the dumpster.

Then, they used over 3 tons of trash to make enormous sculpture-portraits and photographed them. The pictures were auctioned or sold to exhibitions for $300,000, all devolved to the association.

Muniz believes that art can transform garbage, but also the lives of a part of the society that had been forgotten. Waste Land received great media coverage that changed the lives of the catadores (the pickers of garbage) and of the surrounding environment.

In 2012 the Brazilian government closed Jardin Gramacho as they considered it dangerous for the environment, allocated a fund of 11 million dollars to the catadores, and promised them training courses so that they could find new jobs.

Airlite and the anti-smog graffiti

Airlite was born in Italy in 2013: it’s the only paint on the market that eliminates bacteria, reduces pollutants (NOx, SOx, NH3, CO), and lowers painted surface temperatures, reducing air-conditioning costs in the hottest months. It was created by the Italian start-up Advanced Materials, which decided to use its invention for the foundation Air is Art.

The first mural made with Airlite technology is Hunting Pollution in Rome. This work was born in 2018 from the collaboration between the internationally renowned artist Iena Cruz and the non-profit association Yourban 2030. Hunting Pollution is the biggest European mural: it is 1000 square meters in size, which means that it absorbs as much pollution as a wood of 30 trees does.

In 2019 Iena Cruz painted a new Airlite mural in Milan. The artist called it AnthropOceano, and it represents the scars that human interference has caused to the ocean and its seabeds.

In 2019, on the occasion of the Milan Green Week, some artists like Camilla Falsini and Moneyless painted the walls of Milan for the project Futurewear Walls of the brand Napapijri.

You can find the Airlite murals not only in Rome and Milan but also in Padua, Venice, Abano Terme, and Roncadelle. Moreover, Airlite has recently started to paint international walls: in 2019 the French company Pernod Ricard commissioned three huge murals for the project Absolut Street Trees in Mexico City, for a total painted surface of 2000 square meters.

On 19 September 2020, something odd happened in New York: Metronome, an electronic clock that faces Union Square in Manhattan, stopped telling the time, which is what it had done for the previous 20 years. Messages like “The Earth has a deadline” and “The planet has a carbon budget” appeared on the display, and then some numbers: 7:103:15:40:07.

Those numbers show us how much time we have before we experience a global climate catastrophe, and how much time is left to do something to prevent the disaster. The two artists who designed the Climate Clock, Gan Golan and Andrew Boyd, based it on the calculations of the Mercator Research Institute on Global Commons and Climate Change in Berlin.

This project wants to raise awareness about the climate crisis, and that’s why they placed it in a public space in one of the busiest cities of the world. But the Climate Clock was realized to be replicable and to be spread around the world.

In fact, the artists created a website, climateclock.world, where you can read what scientists say about Climate Change, better understand the functioning of the clock, and above all ask for a climate clock in your town, school, or community.

The Climate Clock is the perfect match between contemporary art and science; it mixes scientific truths with the communicative power of art, promoting public environmental awareness and pushing people to get informed and act to fight Climate Change.

What Can You Do?

If we want to have a fair future, everyone has to be involved. If this art has inspired you and encouraged you to be part of the change, the first thing you need to do is get informed. These are my suggestions:

– Read a book! Books like We Are the Weather: Saving the Planet Begins at Breakfast by Jonathan Safran Foer, and Overdressed: The Shockingly High Cost of Cheap Fashion by Elizabeth L. Cline will make you understand the impact of your shopping and eating habits.

– Follow the right accounts on social media: @greenpeace, @fash_rev, @fridaysforfuture are good places to start. Then you can find many activists, scientists, or celebrities that can give you advice and keep you up to date with the latest news.