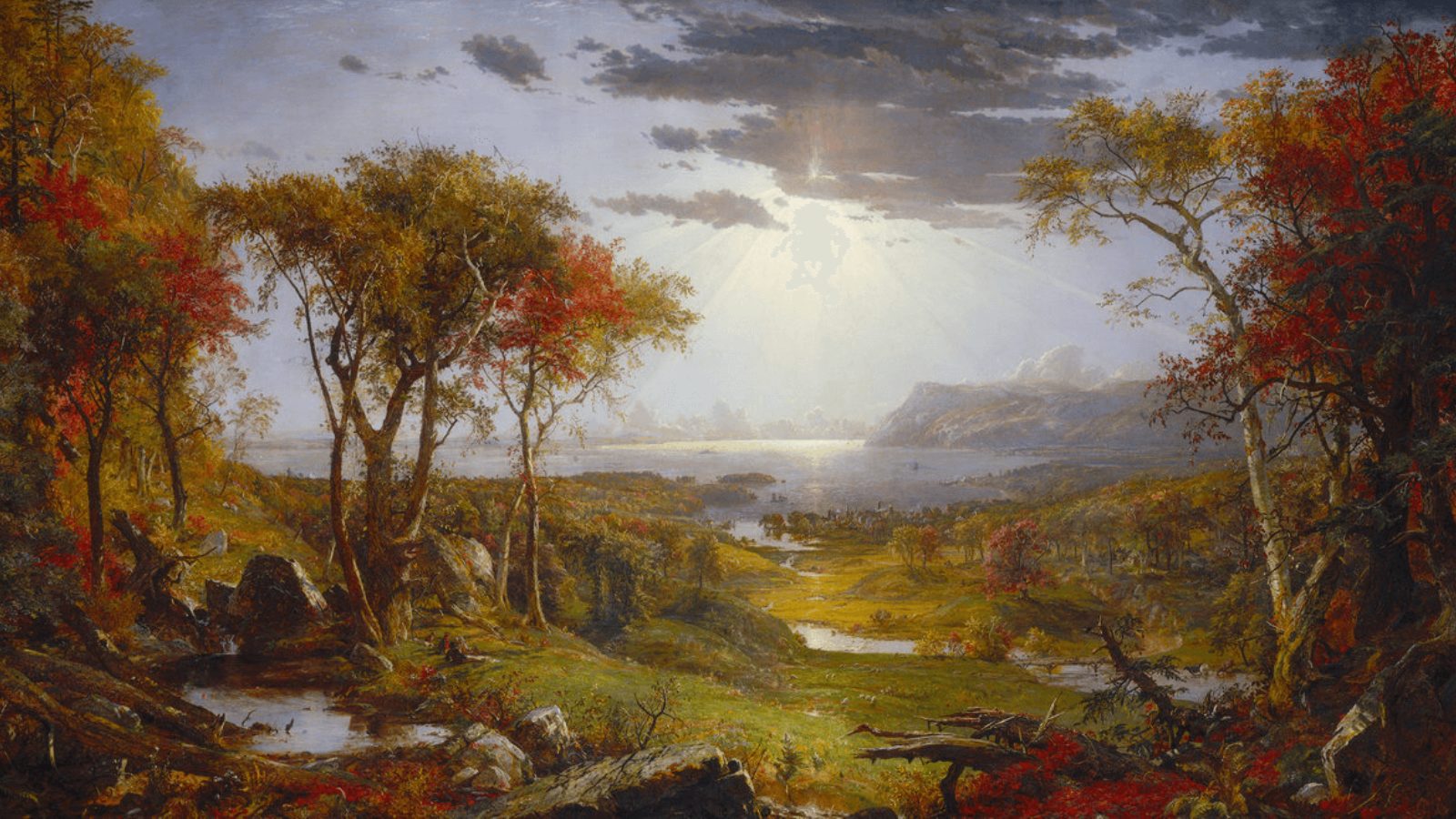 Jasper Francis Cropsey (1823-1900) was an American artist of the Hudson River School movement. He is often called “The Painter of Autumn” because of his colorful autumnal landscape paintings. Since today is the first day of the season, it seems like the perfect time to enjoy his artwork.

Jasper Francis Cropsey was born on Staten Island, New York. He started his career as an architect, but he always loved to paint. For a while, he worked as an architect and pursued painting on the side. Eventually he began painting full-time, though he would eventually return to architecture as well. This was the 1840s, when Hudson River School landscape painting was at the height of its popularity. (Cropsey would also suffer the movement’s decline in the later 19th century, after the American Civil War.) He soon became a success, alongside American greats like Thomas Cole and Frederick Edwin Church.

Jasper Cropsey painted autumn landscapes more beautifully than anybody else, and he also painted many more of them than anybody else. I found at least fifty of his paintings with the word “autumn” in the title, plus many more with related words like “October” or “Indian Summer”. Cropsey also portrayed fall foliage in works without seasonal titles, like In the Ramapo Valley (above).

Although Cropsey travelled extensively in Europe and painted some European landscapes, he set most of his works in the northeastern United States. He most frequently featured landmarks in his home states of New York and New Jersey. For example, the Susquehanna, Hudson, and Delaware Rivers appear in many of his paintings. His wife, Maria, came from the Greenwood Lake area on the New York-New Jersey border. The couple lived in there after their marriage, and Greenwood Lake was one of Cropsey’s favorite subjects to paint.

Jasper Cropsey’s fall landscapes are very appealing, largely because of their intense yellows, oranges, and reds. Cropsey was able to capture nature’s autumnal palette so vividly using chemical-based paints that first appeared in the mid-19th century.

Everything about Cropsey’s peaceful, bucolic landscapes is warm and inviting. Some paintings are highly detailed, while others more painterly. Despite being an architect, Cropsey rarely included buildings in his compositions. Like Thomas Cole, one of his main influences, Cropsey seems to enjoy commemorating a fading, pre-industrial America. Instead of showing signs of modernity, he populated his works with trees, water, animals, and occasional people.

Cropsey painted Autumn on the Hudson River (above) during an extended stay in London. He wanted the English to see America’s beauty, so he exhibited the work in an attention-getting solo show. He and his wife even showed the piece to Queen Victoria in person. Legend has it that the Queen expressed disbelief about its intense colors. She suspected that Cropsey had exaggerated the vibrancy of foliage in his native land, so he supposedly had real autumn leaves sent over from America to prove the point. Autumn in the northeastern United States is genuinely this beautiful, and I’m so happy it’s finally here!

If you find any joy and inspiration in our stories, PLEASE SUPPORT
DailyArt Magazine with modest donation. We love art history and we want to keep going with writing about it.
$5 $10 $25 $50 $100 MONTHLY
Related Topics:American, featured, Hudson River School