Painting of the Week: Giorgione, The Tempest 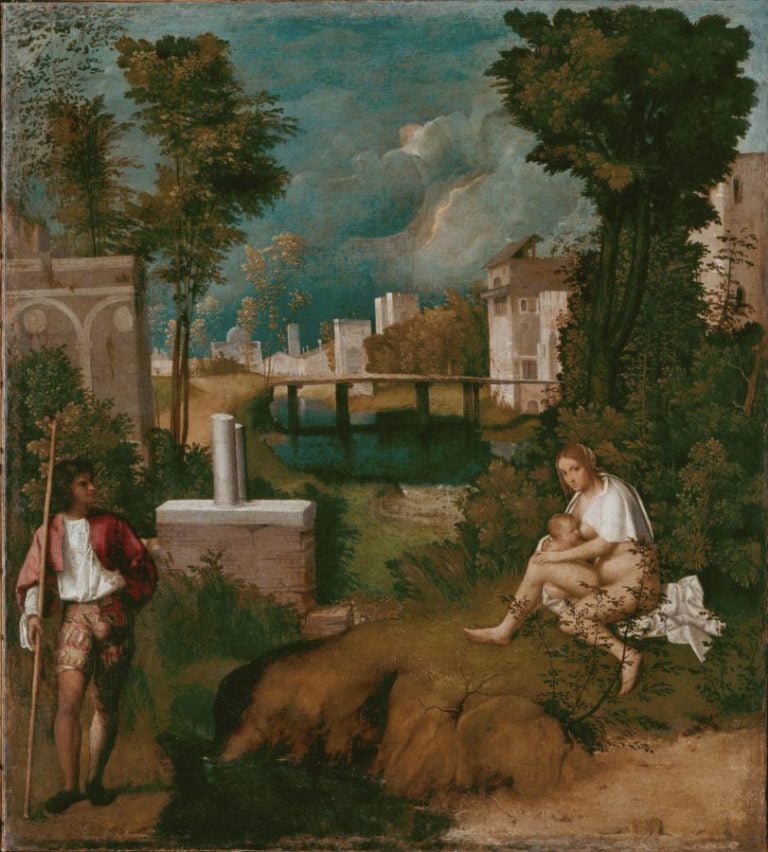 Giorgione and his masterpiece The Tempest form the rare combination of a mysterious artist and a mysterious painting. This small canvas has puzzled art historians since the 16th century and continues to do so.

Giorgio Barbarelli da Castelfranco (1477/78-1510) is considered the co-founder of the Venetian school of painting in the 16th century. Along with the more well-known artist of today, Titian, they created a style that relied on the use of free-flowing color rather than design. With minimal preparatory sketches, they applied layer after layer of oil paint on the canvas, imbuing it with emotion and atmosphere.

There is little we know about Giorgione’s life and even less that we understand about his work. What we know is that he was making a name for himself as a painter in the early 1500’s, creating paintings with innovative subjects for a group of wealthy patrons. We know that he was a friend and colleague of Titian. We know that they worked together and that his influence on Titian’s style, and Venetian painting in general, is immense. This absence of information and lack of paintings attributed to him, is mostly due to his untimely death in 1510, still in his early 30s, due to the plague. Many of his works still in his studio were lost because objects belonging to plague victims were burned. Some were saved with the mediation of his friends, who claimed that they had authored the paintings.

A powerful thunderstorm sweeps across the countryside. A sudden burst of lightning exposes a perplexing scene. A young man holding a large stick is looking at an almost completely nude woman breastfeeding a child. What is the meaning of all this? Why are these people outside in the downpour? Why haven’t they sought shelter? The short answer is that we don’t know.

There are few paintings in the history of art that have received so many, often conflicting, interpretations. The main problem art historians face is that the iconography and the symbolism of the painting does not follow the standard paths which Renaissance painting uses to tell a story.

Some people attempt to explain the scene with mythology, poetry, or classical or religious texts. The two figures have often been identified with a soldier or shepherd and a gypsy, allegorical figures such as fortitude for the man and Charity for the woman even Adam and Eve.

Others point to the sociopolitical situation in the region near Venice at the time to find meaning. Still others believe that there is no identifiable subject, and the meaning is intentionally left open. What makes a concrete explanation even harder is the fact that X-rays have revealed that the figure of the man was not always there. Instead, there was another nude female figure.

A New Way to Paint

Despite these conflicting elements, this artwork is a perfect example of Giorgione’s innovative spirit. The painting is one of the first to ever be called a landscape. At that time landscape painting was deemed the lowest among the other genres of painting, used mostly as background to mythological or historical scenes. However, with works like The Tempest, Giorgione played an important role in the elevation of the genre. Moreover, the application of color introduced a new style in Venetian painting, creating an atmosphere of mystery and foreboding.

Whatever the truth may be, we can still admire Giorgione’s masterpiece for what it is, the outset of the Venetian style and an alluring mystery.