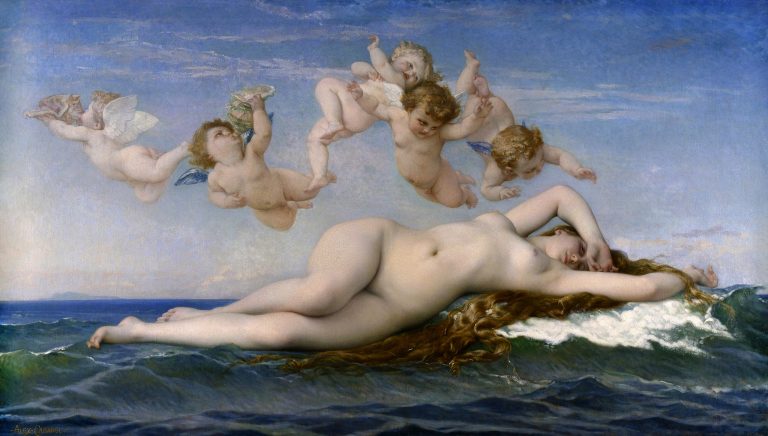 This painting is by a notable French painter and theorist of the Fauve period, Jean Metzinger. It is a fine example of Proto-Cubist work with a stunning mosaic effect. The figures in the center of the painting are rendered in natural tones, while the setting is exuberant and whimsical. The silhouettes of the figures are natural and full and appear to almost blend into the dream-like landscape that envelopes them.

This painting is reminiscent of a previous rendition of Sandro Botticelli depicting the same mythological subject matter and is one of William-Adolphe Bouguereau’s most famous works. Standing almost 10-feet tall and about 7-feet wide (3 x 2 meters), this large composition depicts Venus, the epitome of classical feminine beauty. Venus is depicted in the nude in the center of the frame, perched atop a scallop shell as she emerges from the sea. She is surrounded by several classical figures who are pictured gazing upon her with great interest and celebrating her arrival.

Valentine Cameron Princep was a British painter belonging to the Pre-Raphaelite tradition. Here he depicts a notable biblical scene from the book of Genesis. In the context of Adam and Eve, the nude form was not merely incidental but was central to their identity. Eve is depicted as she is rising from slumber, observing the new scenes around her. She is pictured in front of what appears to be a fallen tree, certainly an interesting choice in the depiction of the Garden of Eden. The soft, luminous effect of light on Eve adds an ethereal quality to the painting. The foliage appears to frame her form in an almost balanced fashion.

Jean-Louis André Théodore Géricault was an esteemed French painter and a pioneer of the Romantic movement in the late 18th century. In his painting here, he chose a barren landscape as the setting so as to keep the focus on the nude form of the solitary male figure. The figure is rich in details and renders the body in a series of interlocked triangular forms, i.e. the bent arm, the bent knee. Although we cannot see his face, by looking at his turned head we can no doubt surmise his quiet contemplation.

Although Henri Rousseau was best known for his depictions of tropical jungles, the inspiration for this famous series came from within the botanical gardens in Paris as the artist never traveled outside of France. The Dream is Rousseau’s last completed work, and a large composition spanning over 6 feet in height and about 10 feet in width (1,8 x 3 meters). It features the artist’s mistress from his youth, reclined majestically albeit unnaturally in the nude in the middle of what appears to be a tropical paradise. There are fruit-bearing trees, wild animals, birds, and a musician peeking through dense foliage. The focus of this painting is undoubtedly on the nude sitter, as she surveys the lively scenes before her.

This curious painting by Kenyon Cox depicts a scenic rural landscape. The nude man in the background, perhaps a shepherd is engaged in a relaxed and contemplative stroll with his dog. The eye of the viewer is drawn first to the four female figures in the foreground, contrasted by the dark foliage behind them. They appear engaged and oblivious to their various stages of undress. There is clear camaraderie and a relaxed conversation between the three figures as they share fruit and a conversation, while the fourth figure reclining on the haystack seems forlorn, perhaps in a passing thought that caught her contemplation.

Andres Zorn was an internationally acclaimed Swedish artist notable for his portraitures of King Oscar II of Sweden, Grover Cleveland, William H. Taft, and Theodore Roosevelt. In this painting, he depicted a woman standing at the edge of a cliff overlooking the water, possibly the Nordic coast. There is a great sense of pride in the posture of the woman as she stands tall and proud facing the sun. She peers into the distance with her long golden air cascading along with her form.

This scene of nude bathers is by a Modernist painter, Arnold Friedman. In the spirit of other “bathers” artworks, there are simplified full-bodied nude figures engaged in rest and relaxation. The painting can primarily be characterized by the clean contours and earth tones that evoke a harmonious sense of calm.

This painting is by Edwin Holgate, a central figure in the development of Canadian art in the 1920s. The modernist aesthetic of this painting is captivating and intentionally unrealistic, as evidenced by the clean, rounded mountains and still water in the background. The figure of the woman lays comfortably on sheets, gazing outward seemingly unaware of the peering eyes.

This artwork is by Otto Mueller, an esteemed German painter, and printmaker of the Die Brücke Expressionist movement. He was known for his simplified contours and two-dimensional compositions. His painting depicts three nude bathers with simplified and elongated forms, rendered within an idyllic landscape that carries the theme. Despite the simplification, the mood of the painting is richly conveyed in the relaxed body language and warm light.