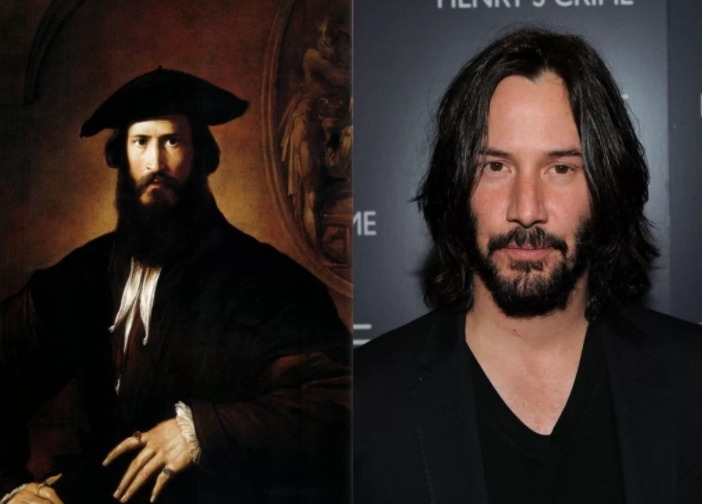 Doppelgänger is a word of German origin (doppel- meaning “double,” and -gänger meaning “goer”). In old German folklore, it was believed that every person had a spirit double (which was invisible, but identical to the living individual). Today the word is usually used as a synonym to look-alike (biologically unrelated people who look just like each other). Anyway, getting to the point: here are 16 doppelgängers of famous people we found in art.

Zygmunt Waliszewski, born in Saint Petersburg in 1897, was a Polish painter fascinated by the art of Cézanne and Matisse. At the time of this self-portrait, he was living in Paris, painting in plein-air and copying the works of old masters at the Louvre. He died in 1936 and, 40 years later, actor Benedict Cumberbatch was born in London. Can we agree that, minus the red turban, the British actor looks just like Waliszewski?

Lady in Blue is one of the last portraits of a woman painted by French painter Paul Cézanne. The lady in question may be either Marie-Louise (a professional model) or Madame Brémond (the painter’s governess). Either way, the sitter reminds us of British actor Maggie Smith, born in 1934 (28 years after Paul Cézanne’s death). In this promotional shoot for her role in Downton Abbey, even her clothes resemble the painting.

Mark Zuckerberg is best known for building the internet empire that is Facebook (which makes it all the more fun to find a king as his doppelgänger). Phillip IV was king of Spain for almost half of the 17th century, and he also acted as king of Portugal as Phillip III. In this portrait by Diego Velázquez, the main painter of his court, we see the king at 18 years old (the same age as Mark Zuckerberg in his first year at Harvard).

This portrait by Baroque painter Bartholomeus Strobel is known for its uncanny resemblance to Robert De Niro. De Niro’s doppelgänger from the 17th century is Wrocław patrician Johann Vogt, who was a landowner and town councilor. Depicted here at age 52, he’s an almost exact copy of the American actor (just add a mustache and a pointy beard).

Born in France in 1659, Hyacinthe Rigaud was a Baroque painter and one of the most important portraitists of King Louis XIV. We’re not talking about his iconic portrait of Louis XIV today, though. It’s Rigaud’s resemblance to actor Edward Norton (born more than two centuries after the painter’s death) that catches our attention in this self-portrait.

Elżbieta Szemplińska, born in 1910, was a Polish poet and prose writer. In this portrait by Stanislaw Ignacy Witkiewicz (a Polish artist also known as Witkacy), she looks very much like actor Nicole Kidman. Elżbieta died at age 57, in 1991; in the same year, Nicole Kidman worked on a film that would result in her first Golden Globe nomination.

Urban legend says Keanu Reeves is immortal, and we may have just the proof for that (kidding!). Here we have not one, but two of his doppelgängers. The more recent is another actor: Paul Mounet, born in France in 1847. Unlike Keanu, who started acting as a child, Paul made his debut at the age of 33.

We can also go back to the 16th century and find another doppelgänger of Reeves in Parmigianino‘s Portrait of a Man. The identity of the figure is a matter of debate -– some say it’s a self-portrait, while others argue that the face doesn’t match other identified self-portraits of Parmigianino. Can we agree that, whoever it is, he looks extraordinarily similar to Keanu Reeves?

Due to his unique style, Amedeo Modigliani‘s portraits are well known (and high-priced). In this 1909 painting, the sitter rests his head on his hand, gazing in the direction of the viewer, looking just like the American actor Johnny Depp.

Actor Rupert Grint is frequently mistaken for singer and songwriter Ed Sheeran (both are British redheads). However, he has another look-alike—and this one is from a couple of centuries ago. Sir David Wilkie, shown below, was a Scottish painter particularly known for his genre scenes and royal portraits (he was Principal Painter in Ordinary to King William IV and to Queen Victoria).

American actor and producer Peter Dinklage is best known for his part as Tyrion Lannister on the TV series Game of Thrones. Born in 1969, he is of German and Irish descent, but it’s in Spanish art that we have found his doppelgänger. Sebastian de Morra, depicted by Velázquez, was in the court of Philip IV of Spain (Zuckerberg’s doppelgänger) and, besides the different eye color, he is undeniably Peter Dinklage’s 17th century look-alike.

Christen Købke was one of the best-known painters from the Golden Age of Danish Painting. In this portrait painted by him in 1835, Carl Adolph Feilberg, a Danish businessman, is depicted at the age of 25. That’s around the same age in which his American doppelgänger, actor John Krasinski, had his career breakthrough playing Jim Halpert in the sitcom The Office.

In this portrait by John Singleton Copley, we see a man who looks an awful lot like American actor Jack Black (lacking only Jack’s usual beard). The painting depicts Paul Revere, an American silversmith born in Boston in 1735. His actor doppelgänger was born less than 5000 kilometers away (in Santa Monica, California), but 234 years apart.

John Singer Sargent marked a generation of painters with his soft brushwork, and his portraits are known to carry a subtle psychological component. In Man Reading, he depicts a man who is thought to be his manservant Nicola d’Inverno. The figure, who seems to be focused on his book, may remind you of singer and songwriter Freddie Mercury, immortalized as lead vocalist in the band Queen.

The Arnolfini Portrait is probably Jan van Eyck‘s most famous painting, so its male figure may look familiar because you have seen the composition before. But it also may look familiar for another reason – some say it resembles a certain Russian president. Vladimir Putin is not a merchant in 15th-century Bruges, of course, but he sure looks like this one.

We only know of around a dozen surviving paintings by Italian painter Jacopo de’ Barbari. One of those rare remaining artworks, painted in 1505, is this portrait of an unidentified young man. With his blond hair, light-colored eyes, and defined bone structure, the figure resembles the young French actor, Gérard Depardieu.

Dutch painter Barent Fabritius, born in 1624, may not have become as famous as Rembrandt or Vermeer, but he managed to become the doppelgänger of the most awarded music artist in history. It’s been more than a decade since Michael Jackson’s death, but his cultural significance and legacy still hold enormous value in pop culture.