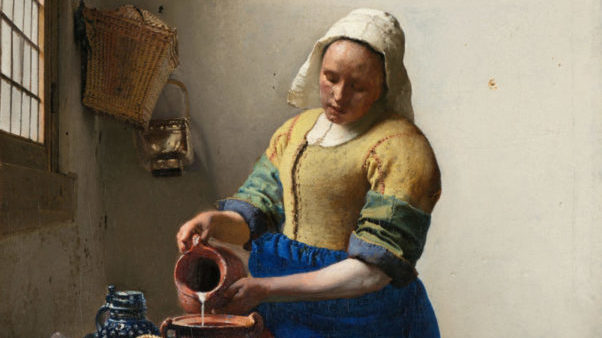 Among many representations of domestic scenes of respectable Dutch middle-class households, there is one that never ceases to impress and capture the imagination. It invites us to step in and maybe even help out with the chores. That is The Milkmaid by Johannes Vermeer.

When I think about the trademarks of the 17th century Dutch paintings I particularly like, two things come to mind: bright intimate indoor spaces and the astonishing way the fabrics and materials are represented. Vermeer does not fail us and his milkmaid is a brilliant showcase of both. There are certain indispensable characteristics which help us to decode, understand and somehow even own this scene, as if it was our kitchen, too. Just to be clear, I doubt this milkmaid would need my help. She looks enraptured in her own private moment, her arms, wrists and hands steadily holding the jug, pouring milk into a ramekin of some kind. She seems to be perfectly in control and I wouldn’t dare to disturb her.

The composition of this oil-on-canvas is simple. There are very few objects. The milkmaid and an almost bare room assembled together in a pyramid, lifts the eye up until it reaches its summit: the girl’s wrist and the white of the milk.

Vermeer has rendered the liquid, as well as the details of fabrics and materials splendidly. The milkmaid’s ochre corset appears coarse but warm, compared to the crisp smoothness of her white headpiece. The different textures reflect or absorb the natural bright light coming through the glass panes of the tall window. Also, the cold sheen of the metal and porcelain stand out against the dimmer shine of the wood. There are so many details for the eye to capture. For example, the panes of the window have been painted with sheer realism. One is broken, one is pushed outwards, one is cracked.

In addition, we notice a few lonely nails in the empty wall behind the milkmaid and can count the holes in the plaster where other nails have been pulled out. The viewer has to let the image sink in, like in a game where whoever is more patient wins the lot.

This painting belongs to a genre that was used to represent the wealth of Dutch families at the time. For instance, to have servants to spare to pose for a painting is a statement in and of itself. In Vermeer’s society it was acknowledged and accepted that a maids engaged in love affairs with their masters – with consent or without it. As a result, some of Vermeer’s contemporary painters conveyed maids as sexually charged women. Or at least, as much as was possible in the 17th century! They were sometimes represented as a potential threat to the peace of a gentleman’s life. In this case, the artist chose a different path and the image is dignified and calm. Therefore, the milkmaid gives us no mischievous half smile, nor does she intensely stare at us while she plucks a quail. I am weirdly grateful to him for that small mercy.

However, there are a few subtle hints that could knock this milkmaid and Vermeer off the pedestal I have placed them on: the jug could be a reference to the shape of the female body and, at the time, milk was known to be an icon of lasciviousness which could lead the viewer to believe this scene has an alternate message. As well as this, one of the characteristic blue and white tiles on the skirting board behind the girl shows a tiny cupid, with arrows and a bow. To the right, on the floor, a feet warmer lays unused. Unsurprisingly, this object could also suggest sexuality and cosiness.

In any case, the milkmaid stands sturdily in front of us and doesn’t acknowledge us at all. The girl’s face looks out of focus, as if a certain stroke of Vermeer’s brush took away the chance for us to know for sure what her true feelings were. Some critics say she is lost in thought, perhaps fantasizing about somebody. The blushing flesh of her cheeks supports this idea.

Others say she is simply focused on making bread pudding. Although I am not sure where I stand with regards to these theories, when I look at her elusive facial expression and strong posture, frozen in time in the perpetual gesture of pouring milk, so white and smooth, I see everlasting beauty. Similarly, this image has suggested the same salvific, noble simplicity to others. An outstanding example of how this peaceful scene can be translated into words is through a poem by Nobel Prize winner, Wislawa Szymborska:

So long as that woman from the Rijksmuseum
in painted quiet and concentration
keeps pouring milk day after day
from the pitcher to the bowl
the World hasn’t earned
the world’s end.

Editor’s note: In September 2022, Rijksmuseum revealed new details found in the composition of The Milkmaid by Vermeer. Restorers from the Dutch museum uncovered several household objects, such as a jug holder on the wall behind the milkmaid and a fire basket (vuurkorf) or a cradle located in the lower right corner of the painting.

These stunning discoveries were made thanks to the state-of-the-art research that is now carried out in preparation for the the largest Vermeer exhibition ever that will be on view in Rijksmuseum from 10 February through 4 June 2023.

You can learn more here.