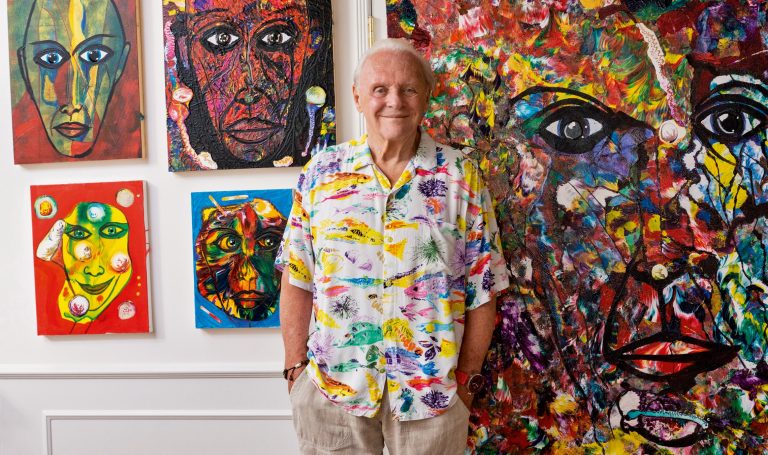 Anthony Hopkins in the studio at his Malibu home with his own artworks. Photo bu Tara Arroyave. Financial Times. Detail.

They say that a creative mind will have its outlet in several areas of art. This explains Leonardo da Vinci’s gift in both painting and architectural design. Also, Pablo Picasso’s genius as a painter and as a playwright. Upon looking into it further, it is easy to see that many people from popular culture also create art in various forms. So, here is a list of celebrities who are better known for their talent in singing and acting but who are also painters.

One of the most famous pop stars of all time – Britney Spears found a hobby in painting. She even posts videos of the painting process on her Instagram account. Her canvases are joyful and usually present colorful flowers. Actually, the one we present here was sold for $10,000 at a charity auction organized for the victims of the Las Vegas shooting in 2017.

One of the best-selling music artists of all time, glam rock singer David Bowie was into painting as well as being a singer and songwriter. An avid art collector, Bowie, owned many artworks – sculptures, paintings and drawings and by the time he passed away his collection comprised more than 5000 pieces. Judging by his life story, it is safe to say that Bowie resorted to painting as a way to soothe his drug addiction. A prolific artist, he produced numerous paintings, the majority of which were portraits and many of which were then sold at auctions. Bowie used dark and hazy colors and his paintings often took on an Expressionist style.

Actress Lucy Liu’s interest in fine art started when she was a teenager. Since then, this inspirational actress has produced several types of artworks, including collages, silkscreens, and paintings. Liu grew up the first generation child of an immigrant family, something which gave rise to her mixed feelings. Liu explains that she saw art as a way to express her ambivalent feelings and moods. Her painting collection, Shunga, attracted a great deal of attention. It featured several highly meticulous works including some lesbian compositions. The Charlie’s Angels artist launched her first museum exhibition, Unhomed Belongings, at the National Museum of Singapore. It ran between January and February 2019.

Actor Anthony Hopkins was introduced to painting by a young woman who made a drawing of little Anthony when he was about six years old. He never went to art school despite the encouragement of people around him who saw his drawings. On this point, Hopkins says that he thought he wasn’t skilled enough at the time. Recently, however, he has got back into fine art. The artist explains that he is quite an experimental painter. When it comes to using different types of paints he has used oil, acrylics, and ink. Right now, his paintings are being permanently exhibited in Harte International Galleries, in Hawaii, USA.

Unfortunately, there is insufficient information about how Marilyn Monroe first took up drawing and painting. Everything we know about her relationship to fine art is from an auction that took place in Los Angeles, USA, in 2016. There, many of the personal items of this iconic blonde were sold for huge prices. The auction also revealed several of Monroe’s artworks.

On the one hand, there was a series of drawings with descriptive captions and minimalist content, such as Lover Watching His Love Sleep (1960). On the other hand, there was a watercolor painting of a red rose, which Monroe intended to give to the then-president John F. Kennedy. As apparent from the inscription, she created this painting as a birthday gift. However, the artist passed away only two months after finishing it and so sadly never got to give the painting to him.