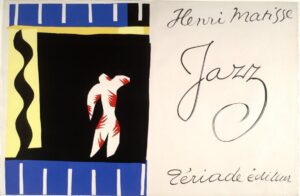 Why Was Matisse Obsessed with Goldfish?

Did You Know That Henri Matisse Went to Morocco?

Henri Matisse (1869–1954) was a French artist famous for his use of color. The Circus (below) is a color stencil piece from Matisse’s book Jazz. Only 350 copies were made of the book so you might not have seen it – yet.

The Color of Jazz

The title, Jazz, evokes musical rhythm and improvisation. It is the audio counterpart of Matisse’s visual aesthetic. Surprisingly, this dazzling and beautiful book was Matisse’s first major ‘cut-out’ project. However, its creation was pivotal in his transition from oil-painting to this new technique.

Jazz is made up of 20 stencil graphics. In addition, there are over 70 pages of text in the form of calligraphy. In terms of method, Matisse used scissors to cut organic shapes from sheets of paper. These sheets had been painted with bright gouache paint. His next step was to arrange them. Color was of paramount importance to Matisse. When it came to the book’s production, he insisted that the publisher should use pochoir. Pochoir is a stencil printing technique which uses the original paint colors.

Although the text might seem spontaneous it was actually drafted four or five times. It also contains a fascinating statement about the act of creation. In particular he explores the themes of art and artifice, intuition and discipline.

The images in the book tend to relate to the circus, mythology or Matisse’s memories of traveling. In fact, The Circus, was the original working title!

The theme of balance and balancing acts is a recurrent motif in the work. For example, The Codomas, the title of one piece, was the name of a famous trapeze act.

Although cheerful on the surface, darker tensions run through Jazz. For example, there are several references to the suffering of wartime. He also makes much use of macabre imagery.

You can find a full list of the illustrations within Jazz here.

I invite you to take a closer look at a great Scottish etcher, muralist, and illustrator, William Hole (1846-1917) whom I discovered by chance when I...

Republic of Austria vs. Altmann: Klimt Goes to Court!

Christianity has a saint for everything, literally everything. And on All Saint’s Day, it’s the time we remember Saint Luke. Not only is he one...

Winter passed so quickly this year. The situation is still weird, to say the least, in several countries around the world. However, Spring has always...