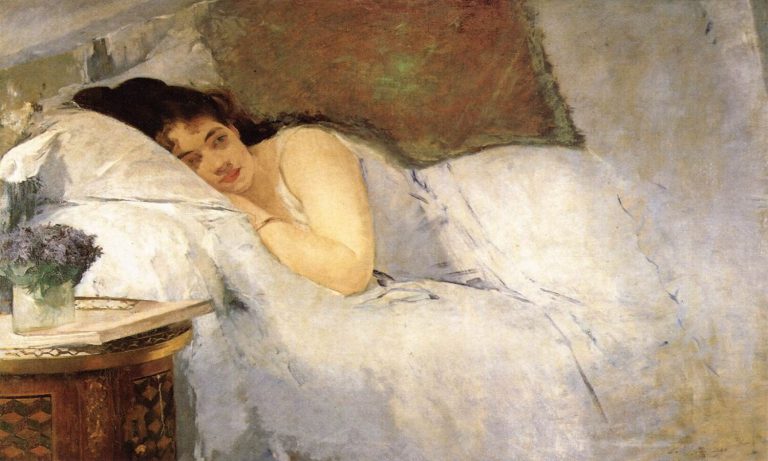 While Eva Gonzalès’ privileged upbringing and supportive family afforded her the opportunities to grow in her artistic abilities and broaden her social circle, she was still a woman in a male-dominated world.

When it comes to the Impressionist movement in art, there are many recognizable names: Manet, Monet, Degas, Pissarro, to name a few. (Take a look at this article for a longer list!) Within that line-up, there are only a few women; and even fewer deemed ‘great’ by the world’s standards. Female artists such as Cassatt and Morisot may ring a bell. But what of other female artists who painted and lived in the same social circle as the above artists but of much is not known? One such artist, Eva Gonzalès, proves that art was not just a man’s world.

Eva Gonzalès (1849–1883) was born in Paris to a novelist father and a musician mother who, in turn, supported their children’s creative abilities. At a young age, she studied under Charles Chaplin at his private studio for female artists, and later, in 1869, Edouard Manet took her on as model and then his only private student.

While women artists were flourishing in higher numbers than ever before towards the end of the 19th century, the notion of a woman’s role in the home and world held them back from possibly succeeding like their male counterparts. In a quote pulled from an essay on Women Impressionists, Art Historian Griselda Pollock makes the point that:

To be a woman artist in the 19th century was to be on the margins of culture but also at its center.

No doubt, her family’s position in society afforded her unique opportunities as a young female artist. And while she could not attend the academic schools for male artists, though her family could afford it, her social connections aided in forming her own style of painting and drawing while also earning the young artist her own recognition in the Impressionist circle of Paris.

Her early personal style closely resembles Manet’s earlier ‘Spanish’ paintings: a darker color palette with high contrasts of light and dark. Above is a portrait by Manet of the young artist which has been critiqued heavily since its debut due to its odd composition.

Like Mary Cassatt and Berthe Morisot, Gonzalès’ oeuvre is filled with portraits and studies of the female nature: women, children, etc. It is partially because of her ‘feminine’ themes that she is among the other impressionist artists of her time. She focused on many of the same themes as her colleagues in her early career, moving on to her own style and palette of colors in later years.

But Gonzalès’ oeuvre stands out in that she did not seek to be shown in Impressionist salons. Instead, she focused on the prestigious and traditional Paris Salon.

She exhibited with the help of Manet and also showed alongside him; art historians believe she never gained the trajectory of other similar artists because she was often in Manet’s shadow.

Her sister, Jeanne Gonzalès, featured heavily in her paintings and pastel pieces. The younger Gonzalès sister, who modeled for and learned from Eva, would later marry Eva’s widowed husband.

An Homage to Manet

The following painting not only shows an influence by Manet, but it closely resembles Manet’s Le Fifre, as if the two paintings are a set. Gonzalès’ is more three-dimensional than her mentor’s own painting, however. At 21, this painting was one of her first accepted pieces to the 1870s Salon. But even then, despite her natural talent, critics did not take her seriously.

Sadly, in 1883 she passed away after giving birth to her only son with the French engraver, Henri Guérard. She left behind roughly 124 oil paintings and pastels which are in both private collections as well as a number of art museums across the world.

Though she never achieved the ‘celebrity status’ of her colleagues and passed away much too young, Gonzalès’ work is worth a look if you are wanting to learn more about female artists in art history; along with how their their audiences and colleagues perceived them.