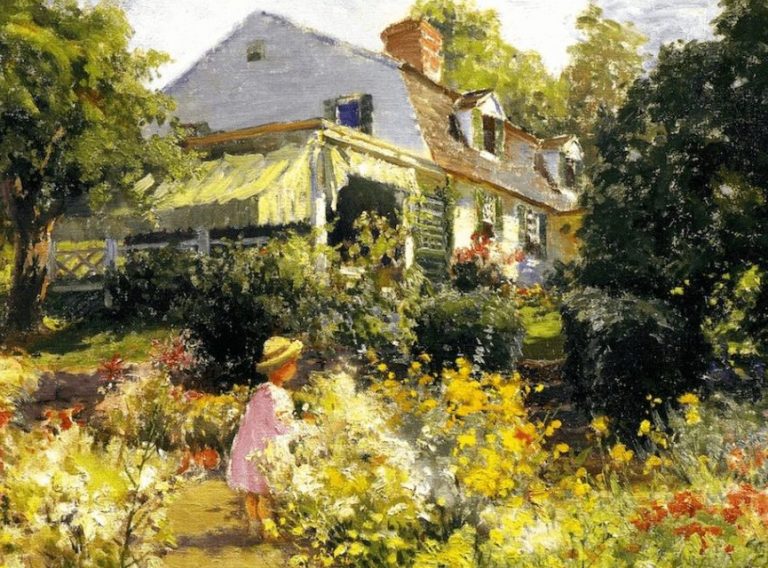 Matilda Browne (1869–1947) was a successful artist painting in the Impressionist style in the early 20th century, but unfortunately, only a few people know her name or her art today.

Matilda Browne showed promising artistic talent early in her life. Growing up in Newark, New Jersey, she was introduced to art by watching her neighbor, a Hudson River School painter Thomas Moran.

Her parents supported their budding young artist. She studied with many teachers, including Moran, Kate and Eleanor Greatorex (daughters of Eliza Pratt Greatorex), Carleton Wiggins, and Julian Dupré. Her mother took her to Europe for training while she was still quite young. And it paid off. Matilda Browne participated in her first major exhibition at the National Academy of Design when she was just 12 years old.

Browne loved to paint animals, especially cows and other livestock. She also painted many flowers, often in colorful garden landscapes. Her bold brushwork gave her floral paintings a lush, fluffy appearance that is easy to identify once you’ve seen it a few times. Her style is best described as Impressionism, although her pastoral animal scenes recall French Barbizon landscape painting. She also made some bronze animal sculptures.

Matilda Browne quickly became a respected and successful artist. Her list of accolades opened doors that would have been otherwise un-accessible for a female artist of her time. As an adult, she moved to Connecticut, where she painted in the Cos Cob and Old Lyme art colonies.

At Old Lyme, she was the only woman accepted into the inner circle living and working at Florence Griswold’s boarding house. Although the group wasn’t typically friendly to female artists, these men liked and respected Browne. She even had the honor of painting a door in Miss Florence’s house, on which she depicted two peaceful cows in a bucolic landscape. Some sources say that her good sense of humor helped her fit in with the boys, while others claim that her seriousness is what won them over. Either way, her great skill as a painter made the other artists take notice. Her membership in the Old Lyme Art Colony is commemorated by her inclusion in Henry Rankin Poore’s Fox Chase, a playful frieze over Miss Florence’s dining room fireplace.

Browne was a successful artist throughout her life. She won numerous awards, such as a medal at the 1893 World’s Columbian Exposition, and exhibited in many important shows, including the Paris Salon. Art critics raved about her. She married Frederick Van Wyck in 1918. Van Wyck wrote a book called Recollection of an Old New Yorker in 1932, and Matilda did all the illustrations.

Even though Matilda Browne was so successful in her time, very few people know about her today. This is a more common story for female artists than one might think, and it’s always quite frustrating to hear. Art history embraces female Impressionists like Mary Cassatt and Berthe Morisot. So, why has Browne faded into obscurity? It could be because she’s a double minority – in gender and nationality. While researching her, I found that books about female Impressionists omit her, presumably because she was American, while books about American Impressionists tend to focus on male artists.

Most of Browne’s works are in private collections. The Florence Griswold Museum is the best place to see her art.