Endless – The First Street Artist Featured in the Uffizi Gallery 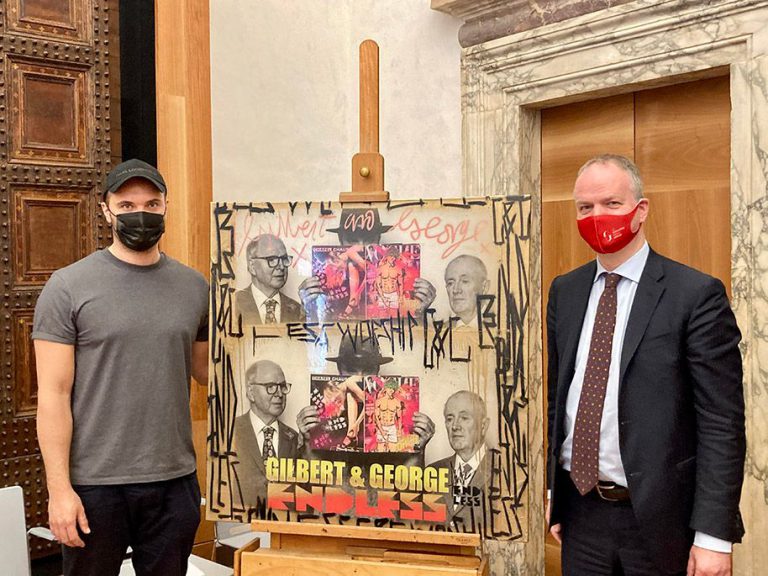 British street artist Endless recently donated a unique piece of art to the Uffizi Gallery in Florence, renowned for its unparalleled collection of Italian Renaissance masterpieces. In doing so, not only does he become the first-ever street artist to be represented in one of the oldest and the most important museums in the world, but the artwork will remain a permanent part of the Uffizi collection.

Getting to Know Endless

Everything has been already done. I am not doing anything new, I am just doing it in my own may.

Endless in the interview with the author, 2021.

Endless is a London-based artist, with a mysterious name that is art in itself, who blends together street, pop, and Contemporary art. After 6 years of studies, Endless graduated from Cambridge School Of Art, where he specialized in fine arts and screen printing and shortly after began using the streets of London as his canvas, to share his ideas with the world. The journey from the street to the gallery has seen Endless’ reputation rise, capturing the attention of the art world, brands, and the media alike.

Endless boasts numerous collaborations with international artists including Gilbert & George and high-profile brands such as Karl Lagerfeld and retro Italian fashion brand Fiorucci. His most exclusive work can be found at Cris Contini Contemporary gallery in London and Porto Montenegro, as well as within the homes of well-established collectors across the world.

The logo CHAPEL is often found in Endless’ work from the Deities collection (a series of paintings showcasing the contrast between old and modern-day symbols of worship), revealing his own take on the iconic Chanel No 5 perfume. The name change in Endless’ designs represents society’s brand-obsessed culture shift in one word, Chapel, a world where brands are the new deities, shops are the new churches, glossy magazines are Bibles, and celebrities, marketers, and advertisers play the part of God. The gods in his works include industry legends like Karl Lagerfeld, Kate Moss, and Naomi Campbell.

Provocative and radical in his creation, Endless tells a story of our world, giving an honest and philosophical description of our surroundings, exploring aspects of fashion, advertising, and modern consumer culture. His work is neither positive nor negative in its outcome, allowing the viewer to determine their own perspective by interacting with hidden messages and the playful, alluring, and opulent aesthetic.

Endless recently presented his self-portrait with Gilbert & George at the Uffizi Gallery, making him the first street artist in history to add such artwork to the permanent collection in the Florentine museum. The donation was made by Endless at the Vasari Auditorium, at an event attended by museum director Eike Schmidt and art critic Pasquale Lettieri.

In his art Endless proposes an original fusion between punk and pop, which in the self-portrait extends to conceptual art. Observing the historical collections of the Uffizi, how the Medici Grand Dukes were eager to grab the latest news – even the most daring – produced on the artistic scene, I think today they would be happy to see the work of Endless enter the collections that they have with such care started and increased, centuries ago.

The artwork donated is a 100 x 100 cm portrait piece, titled E X G&G featuring two vertically stacked printings depicting the artist with the iconic art duo, Gilbert & George, in their studio. The original photo, which was directed by Endless and taken by London-based photographer, Noel Shelley, reveals Gilbert & George embracing their signature living sculpture poses, whilst Endless reads a copy of a popular culture magazine. The handwritten graffiti lettering by Endless adds rhythm to the composition.

Endless’ face is partially hidden behind the magazine featuring the so-called “crotch grab”, a recurring image in the artist’s work. Based on a famous Calvin Klein underwear advertisement from the 1990s featuring actor Mark Wahlberg, “crotch grab” originally appeared on the streets of London and was later appropriated by Gilbert & George. They took a picture of it and by using it in one of their artworks it became their artwork which went on display all over the world. This was a connecting thread between Endless and the two “living paintings” as they often call themselves. That’s how Endless’ art came from the street to the gallery.

The advertising-inspired “crotch grab” appearing in the artwork could be considered by many as provocative and scandalous but in fact, it will be unique among the Uffizi’s male torsos by actually having pants, everything else in the museum is naked. The artist himself said: “I don’t think it’s any more scandalous than the nudes that are already in there. He’s got pants on.” Although the piece strays from the Renaissance canon for which the Uffizi is renowned, the gallery’s director, Eike Schmidt, added:

The Crotch grab references artworks we have in the collection on multiple levels. It references the pose of the Venus de’ Medici and Botticelli’s Venus but transplants it from the female to the male body. We also have several group portraits; the most famous would be Rubens’ Four Philosophers.

Eike Schmidt in: Donation of a self-portrait by the artist Endless, press release, Uffizi Gallery.

The “crotch grab” may be seen as the birth of Venus, some kind of contemporary Neptune, or another deity because now we worship celebrities as contemporary deities.

The artwork is available to be seen since July 2021 in the portrait section of the Uffizi Gallery – in the so-called Vasari Corridor named after its Renaissance constructor Giorgio Vasari. The Corridor, which has been inaccessible for a long time, contains a collection of multiple artist’s self-portraits continually acquired by the Medici family. This long tradition has never ceased, and to the present day, the museum has gathered more than 100 self-portraits of contemporary artists, such as Michelangelo Pistoletto, Yayoi Kusama, Francesca Woodman, Antony Gormley, Neo Rauch, and many others.

Banksy already created the path to push street art in a certain direction but the inclusion of Endless’ work into the gallery with a strong historic statement represents a culmination of a decade in which street art has gained more respect. Even though Endless continues to express his ideas on the streets, by enlarging the Medici collection, his artwork will remain in the hall of fame among other masterpieces, and so, his work and artistic legacy will be endless…