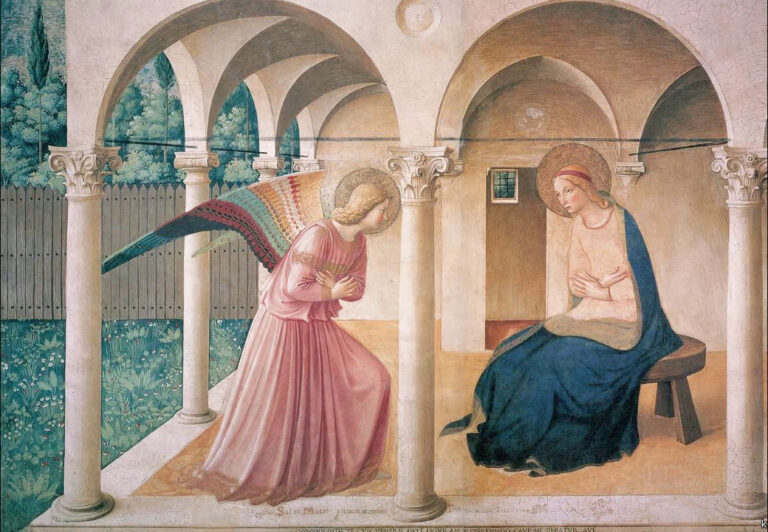 The Medici were one of the richest family dynasties that ever lived and perhaps the most influential patrons of the arts in history. For it was their great wealth and patronage from which the Renaissance of art and architecture was born out of medieval Florence. Though how did a wealthy family of bankers come to be all-powerful King-like rulers, legitimised with a divine mandate? Here lies the story of how some of the greatest art ever created was used to transform a family of rich sinners, into an all-powerful dynasty of saintly rulers.

It starts in the markets of medieval Florence in the early and mid 1300’s. The Medici family started with the traditional bench, lending money to merchants, with interest, which culminated in the Medici Bank, founded in 1397. However, as their wealth grew, there appeared a moral dilemma. In fact, more than a dilemma, the biblical sin of usury (charging excessive interest in money lending), created a significant barrier to the legitimacy of their power, and more so, to their own personal places in the heavens. Why?

Dante’s famous 7th Circle of Hell was specifically reserved for the worst and most violent sinners. Though why was there also a place there for the ‘usurer’, and what could be so bad about such a white-collar crime as usury? However, in the Middle Ages, it was considered a serious perversion or violation of the laws of a just economy. It was also defined differently than it is today: medieval theologians believed that charging any interest at all on a loan was usury. Thomas Aquinas, for example, stated that ”’it is in accordance with nature that money should increase from natural goods and not from money itself.”

“But still the usurer takes another way:
He scorns nature and her follower, art,
Because he puts his hope in something else.”

Whilst the Medici Bank was bought to the forefront by Giovanni di Bicci, it was his son, Cosimo de’ Medici who turned that financial power into a political dynasty, and who was perhaps the greatest patron of learning, arts and architecture. As far as the arts were concerned, Cosimo presided over the golden age of the Italian Renaissance, commissioning work from such masters as Fra Angelico, Fra Filippo Lippi, Brunelleschi and Donatello.

“Cosimo de’ Medici… [was] a citizen of rare wisdom and inestimable riches, and therefore most celebrated all over Europe, especially because he had spent over 400,000 ducats in building churches, monasteries and other sumptuous edifices not only in his own country but in many other parts of the world, doing all this with admirable magnificence and truly regal spirit, since he had been more concerned with immortalizing his name than providing for his descendants.” It’s this quote that gives further insight into the Medici mindset. For despite his wealth, power and patronage, Cosimo still carried the ball and chain of ‘usury’ around with him and his family.

Simply by visiting some of Florence’s most beautiful and important buildings, it could be seen (then, as now) what Christianity thought of the fate of the usurer. Take for example the East Doors (or the Gates of Paradise as Michelangelo had named them due to their divine perfection) of the Florence Baptistry (across the piazza from the Cosimo patronised famous dome of Brunelleschi). The East Doors, a Renaissance masterpiece of gilded bronze which took 21 years to complete, this time by Florentine artist Lorenzo Ghiberti, which, like many other pieces of the time, pays reference to the sinners of ‘usury’ in one of the most praised works of art of the period. It is even said that Cosimo himself was baptised there.

How to Rid the Medici Dynasty of a Biblical Sin?

In November 1434, Cosimo de’ Medici, returned from exile to become the virtual ruler of Florence. Expiating his sins of pride and usury he magnanimously undertook the reconstruction of the Basilica de San Marco. Put simply, you could buy your way out of hell (sanctioned officially by church doctrine) by sponsoring art and architecture.

At staggering expense, Cosimo commissioned architect, Michelozzo to rebuild San Marco’s cells cloister and choir, he fed and clothed the monks and funded the great library. San Marco was an austere order of Dominicans who lived in simple cells, however each containing a sublime single fresco by Fra Angelico for spiritual contemplation. Pope Eugenius consecrated the church on the Feast of the Epiphany on 6th January 1443. Fra Angelico was at the height of his fame, decorating each of the cells and the convent interiors.

Cosimo had his own cell in the convent for his own worship and contemplation (albeit with a passageway back to the ‘real’ world outside). So the Medici were off the hook? Cosimo’s contribution to the church had officially expunged their sins and they had support from the Pope and a divine authority to rule. Even a plaque laid at San Marco states to this effect.

Though for Cosimo, was this enough? With renewed confidence in their divine right to rule, the aforementioned date of 6th January loomed large. For who in the Bible was rich and good? The answer was The Magi (Three Kings). The Medici became obsessed that it was they who they represented. In ‘The Makers of Modern Art’, BBC Documentary, art historian Andrew Graham Dixon states “they joined a fraternity celebrating them [The Magi] and wanted the rest of Florence to join.”

The pinnacle of this obsession was realised in The Magi Chapel in the Palazzo Ricciardi of Florence. Its walls almost entirely covered by a famous cycle of frescoes by Renaissance master Benozzo Gozzoli, painted around 1459 for the Medici family.

This was Cosimo’s private chapel and it was Gozzoli’s fantastical Journey of The Magi which perhaps represents best, the Medici belief in their own place as divine rulers, casting themselves as part of the holy procession, dressed in all the glory of wealth, power and magnificence. “Cosimo was the smart one and transformed the Medici status not just in the eyes of every Florentine but in the eyes of God, on their own journey, from sinners … to not far off sainthood!”

In the aforementioned documentary, Andrew Graham Dixon describes the chapel as “a celebration of the sheer marked joy of capitalism.” It announces and reaffirms, that wealth and power can be good and godly. You just needed the greatest art of the greatest period of European art since the classical period to help communicate it.

Yet, there was also now a new problem. For wasn’t all this gold and finery, all this wealth and power, all this richness in art and colour even, all somehow at odds with Christ’s life, his suffering and the humble simplicity of his teachings? Had the Medici gone too far trying to rid themselves of the sinful label of usury?

Perhaps the answer lies in another famous Florentine basilica, the parish church of the Medici family of San Lorenzo, where many of the principle Medici were buried.

By the time Michelangelo had begun work on the New Sacristy (Sagrestia Nuevo) in 1520, the halcyon days of Medici power were already in the past. Yes they would be powerful for another century and more but the direct rule of the likes of Lorenzo the Magnificent and Cosimo, whose patronage allowed the creation of many of the great masterpieces of the Italian Renaissance, and who promoted learning and the arts, was firmly behind the family. Lorenzo let the Medici Bank decay as he concentrated on running the Florentine state. Times had changed with the later Medici completing the transition from merchants, to aristocrats and even to Royals.

Intended as a mausoleum for the Medici family, Michelangelo designed monuments for the Sacristy dedicated to certain members, though he never finished it (various events including the Medici exile in 1527 and the permanent departure of Michelangelo to Rome in 1534), though most of the sculptures had been created and were later installed by Niccolò Tribolo in 1545.

Tombs to Lorenzo the Magnificent and his brother Giuliano were never begun with the result being the magnificent existing tombs are those of comparatively insignificant Medici. So what had started as a project by arguably the greatest sculptor (or at least one the best known) of all time, commissioned to ensure the eternal memory of the greatest Medici, in their own chapel, became something else. Perhaps it now appears that somewhat, it has become a symbol of their decline in power?

Michelangelo might have also had the final say. In his biography, Condivi (his biographer) states:

“The statues are four in number, placed in a sacristy . . . the sarcophagi are placed before the side walls, and on the lids of each there recline two big figures, larger than life, to wit, a man and a woman; they signify Day and Night and, in conjunction, Time which devours all things… And in order to signify Time he planned to make a mouse, having left a bit of marble upon the work (which [plan] he subsequently did not carry out because he was prevented by circumstances), because this little animal ceaselessly gnaws and consumes just as time devours everything.”

Is it the great man’s way (who himself had a mixed relationship with the Medici family – on occasion he was in-hiding from them) of saying that for all the wealth, power, finery and glory, ultimately nothing lasts? A statement all the greater for it being placed at their own sacred, front door.

Whilst Cosimo and Lorenzo did appear to transform the family from wealthy sinners into divinely endorsed rulers, Michelangelo shows us that ultimately everything that rises must fall, and eventually turns to dust. Though it was certainly the wealth of the Medici, and also their passion to become something more, something else, that bought us some of the finest art of the Renaissance period, as well as a legacy of architecture, philosophy and learning. For this, we must all thank them.

After 15 years working in digital marketing, I now split my time between my digital marketing consultancy, alongside studying for an MA in Art History. I'm passionate about looking at how an artist came to create a piece of work, for whom and what was the political and social history and events of the time that influenced its nature and how it was or is now perceived. Specialising in art of the Classical period and the Renaissance, however equally passionate about non-European art. I live with my wife and 2 year old in the historic city of York, UK.