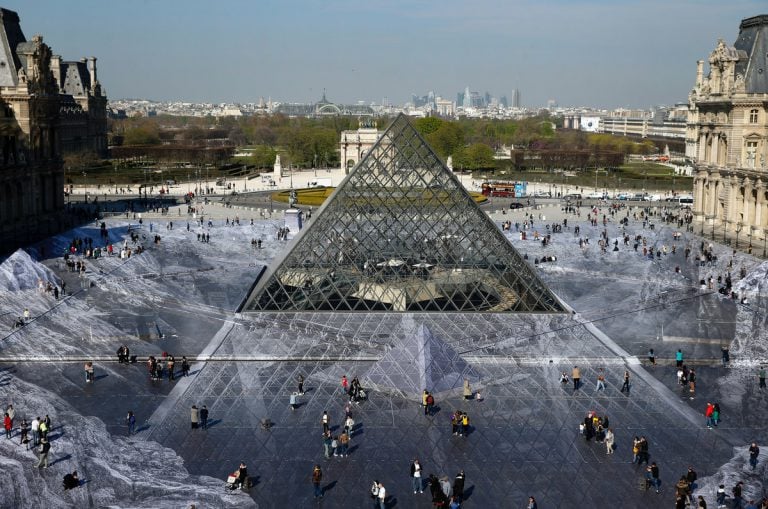 In 2016, the urban photographer “JR” decided to visually remove the famous pyramid known as the modern symbol of the Louvre. Three years later, he expands on the very same by revealing fantasized foundations. Let’s have a look at the link between JR and the icon of the world’s largest museum.

Whether in 2016 or 2019, JR‘s art at the Louvre is comprised of basically the same tools. In the Napoleon courtyard of the palace, frequented by thousands of tourists every day, a black and white photograph made from square meters of paper stages an illusion whose dimensions are on the scale of the imagination of the artist.

In 2016, JR shed light on his first “Louvresque” illusion with his first photographic anamorphosis. An image of the Renaissance architecture of the palace, usually made invisible by the glass and iron aedicule, is glued to the most photographed side of the pyramid, hiding the modern icon of the museum from our view. Thus, with a brilliant trompe-l’oeil effect, JR revealed to the public today what our elders saw before the 1980s, before the construction of the pyramid by Ieoh Ming Pei.

This programmed disappearance was actually part of the Unframed project that has been presided over by the artist since 2009. JR, then, gave a new meaning to archive images by reintegrating them into their original architectural context in a desire to reactivate our collective memory.

Three years later, the artist, recognizable by his dark hat and glasses, set his sights once again on the glass pyramid, which, in 2019, celebrated its 30th anniversary. 400 volunteers took turns to glue 17,000 square meters of paper. Through this new photographic illusion, JR revealed to tourists the totally imaginary foundations of the pyramid, thus wanting to reveal phantasmagorical secrets around the icon.

However, many passers-by were disappointed with the ephemeral nature of the work, which, from the first contact with the footsteps of visitors, began to crumble. Nevertheless, for the urban photographer, nothing is more normal.

“Images, like life, are ephemeral,” he wrote in response to the disappointed spectators. “Once glued, the work of art has a life of its own. The sun dried up the light glue, and with each step people tore pieces of the fragile paper. This process is all about the participation of volunteers, visitors and souvenir hunters,” he says.

Thus, illusions at an imposing scale, sometimes tinged with fantasies and sometimes with historicity, the photography signed “JR” tends to access the universal through its scope that is as striking as it is ephemeral.