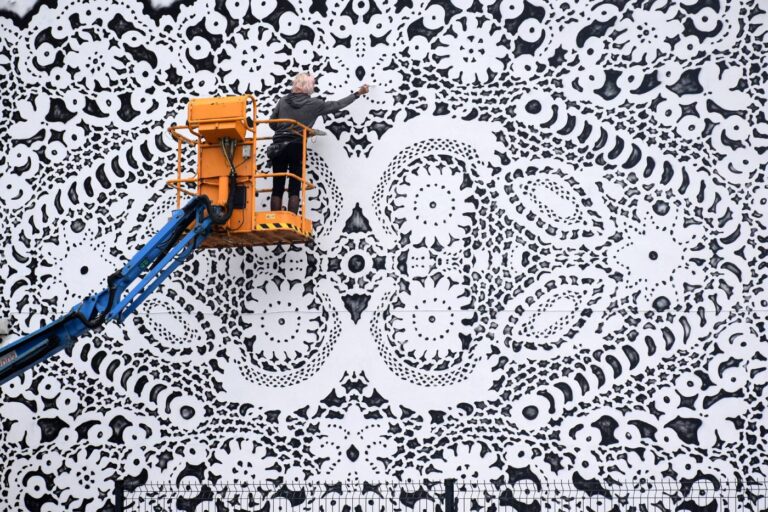 NeSpoon is a street artist who combines ceramics, lace, and graffiti in her work. She travels the world and decorates old buildings or run-down street corners with her characteristic crochet-patterned murals and pottery panels. But what does NeSpoon‘s street art have to do with The Matrix?

Neo and a Spoon

NeSpoon believes that what we think shapes our world. That’s how she came up with her nickname, remembering the scene from The Matrix in which Neo realizes that reality is only a projection of his mind and subsequently he manages to bend a spoon by just looking at it. So does NeSpoon; she manages to bend her own reality and hop over any limitations.

Lace by the Seaside

She began her career as a painter, fascinated by portraits of Rembrandt and contemplative atmospheres of Rothko’s color fields. However, after a couple of years, she realized oil painting was not for her. Therefore, she turned to pottery and began experimenting with bowls and imprinting leaves in ceramic. One day when she was at the seaside, she saw some curiously shaped tree branches lying on the beach and she visualized a crochet pattern between their smaller twigs. This is how it all began. In 2009, she started her production of ceramic lace which would fill the tree holes, gaps in old city walls or between the pavement panels.

From Gaps to Walls

The artist says that it takes roughly two weeks to make a small ceramic lace panel. But when she prepares her crochet murals, she first hand-draws her templates in original scale and later cuts them out. Her large-scale works attract attention and bring her new commissions: she has already worked in Spain, Italy, the Netherlands, France, Poland, Portugal, Sweden, Austria, Hong Kong, United States, Germany, India…

She recalls a historic artistic installation in 1995 that Christo and Jeanne-Claude made together in Berlin. They needed 23 years and hundreds of official permissions to wrap the Reichstag in their trademark brown wrapping paper. NeSpoon was in Berlin in that time and she still remembers the contagious positive energy that flowed in the streets of the city and she dreams of making an installation which would again unite people and make them enjoy the moment.