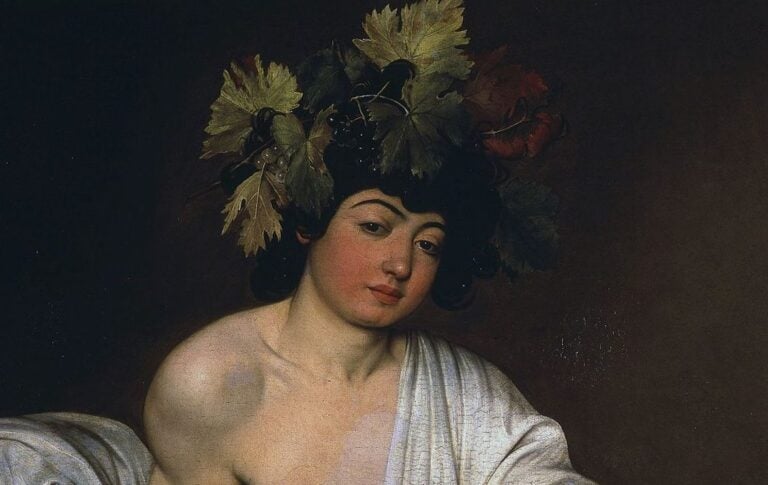 Why Bacchus Is God of Wine? Art History Story

A youthful Bacchus, god of fertility, ritual madness, religious ecstasy and theatre is reclining in classical fashion with grapes and vine leaves in his hair. On a stone table in front of him, there is a bowl of fruit and a large carafe of red wine. With his left hand, he holds out to the viewer a shallow goblet of the same wine, maybe toasting and inviting the viewer to join him. Read the story of Caravaggio’s Bacchus!

But something is not right. Compared to ideal Renaissance depictions of Ancient gods, a red-faced Bacchus looks more like a drunk teenager waiting for the great party to begin. He doesn’t look very much like a god. His fingernails are dirty and his eyes are a bit sleepy. The model’s “antique” toga is recognizable as a contemporary men’s shirt pulled down over one shoulder. The dirty mattress peeking out under a not-too-clean sheet. This is one of the most human-like gods created in art history.

According to some scientists, Caravaggio delivered an accurate and precise diagnosis of Alcohol Use Disorder (AUD) with all its neurological and psychiatric symptoms: the skin rosacea, the impaired fine and gross motor movements; the hand tremor resulting in the undulating wine inside the chalice, and the possibility exists of losing the balance of the model’s right elbow and hitting the fragile carafe. The dilated blood vessels showed by the flushed face, swollen eyelids, and red hands. Pure realism!

The basket of fruit we see in front of Bacchus is sometimes interpreted as vanitas. It was intended to remind the viewer of the fleeting nature and meaninglessness of earthly life. The basket of bruised, overripe, wormy fruits could also have a symbolic message, such as a warning of the fleetingness of youth and the eminence of death.

The model for Bacchus might have been Caravaggio’s friend and also a painter Mario Minniti, whom he had portrayed before in Boy with a Basket of Fruit; The Fortune Teller; The Musicians; Boy Bitten by a Lizard (probable); The Lute Player; The Calling of Saint Matthew, and The Martyrdom of Saint Matthew. Maybe Caravaggio’s Bacchus was just something like a prank, a 17th century snapshot of a friend with whom the artist probably partied a lot. And drunk a lot, as Caravaggio himself was a known drunk.

There is also another conception. Bacchus’ offering of the wine with his left hand has led to speculation that Caravaggio used a mirror to assist himself while working from life, doing away with the need for drawing. In other words, what appears to us as the boy’s left hand was actually his right. It is known from Caravaggio’s early biographer, the artist Giovanni Baglione, that the painter did some of his early paintings using a mirror.

Bacchus was painted shortly after Caravaggio joined the household of his first important patron, Cardinal Del Monte, and reflects the humanist interests of the Cardinal’s educated circle. It was not in the first owner’s collection when he passed away as it may have been a gift to the Grand Duke of Florence. The painting was unknown until 1913.