This Is Madness: Beyoncé and Pipilotti Rist As Maenads 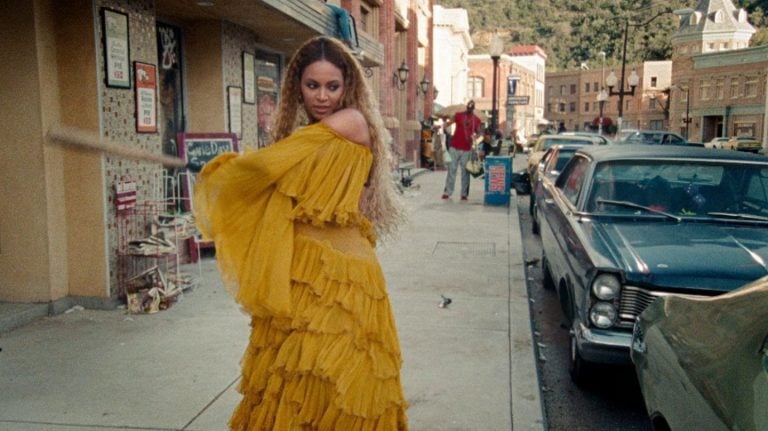 Hold on, what do Beyoncé’s music clip and modern video artwork have to do with Maenadism? Read the story of Hold Up by Beyoncé and Pipilotti Rist’s Ever is Over All and how it is connected to the Maenads, the female followers of the god Dionysus.

Beyoncé is wearing a feminine, mustard-yellow dress while walking down the street in high heels and a big smile on her face. But don’t be mistaken: Beyoncé is furious. In this scene from a music video Hold Up, which gained over 209 million views, the pop legend smashes car windows with her baseball bat, aka Hot Sauce. It has also become one of Beyoncé’s most iconic performances.

It may come as a surprise to learn that the scene from Hold Up looks a lot like a work by contemporary artist Pipilotti Rist, titled Ever is Over All. In this 1997 video installation, Rist walks down a similar-looking street. Here she smashes car windows not with a baseball bat, but with a big flower. She seems to be in some kind of an ecstatic state of mind and looks misplaced, ripped away from something. Just like the flower she holds.

After comparing the two, the artistic influence of Ever is Over All on Hold Up seems obvious. At one point Beyoncé was actually accused of stealing the idea from Rist. This brings up another question – what influenced Rist to create her video installation?

Beyoncé and Pipilotti Rist As Maenads

Dr. Nava Sevilla-Sadeh, an art history professor at Tel Aviv University, suggests an answer in her article. She claims that Rist’s performance is heavily based on Maenads: a group of women depicted in Greek mythology.

According to Dr. Sevilla-Sadeh, Maenadism is a religious ritual that celebrates Dionysus, the god of wine and, like the Maenads, he is also associated with religious madness. During the ritual, the Maenads danced violently, sang and cried to at its peak experience Euphoria – a sense of complete relaxation. In a similar way, both contemporary artists Rist and Beyoncé look extremely calm while performing violent actions. Furthermore, the representations of Maenads holding a big flower, just like the one Rist used, were found on different vase fragments.

All of the antique examples show manic, out-of-control, and crazy women, who despite their feminine dress perform actions that are not stereotypically feminine. Similarly, Rist and Beyoncé are wearing dresses, heels and have long hair, yet their mad behavior does not “suit” their appearance. This contrast is what makes representations of Maenadism in art so interesting: it challenges the conceptions of how a woman should behave, from ancient times to this day.