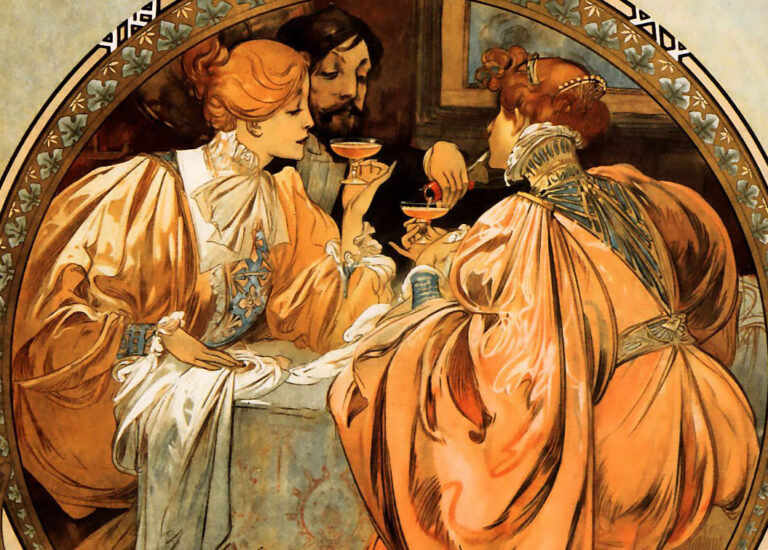 Are you ready for a crazy party tonight? Although lithography was invented in 1798, at first it was too slow and expensive for poster production. Most posters were made using wood or metal engravings with little color or design. Here are ten 19th century party posters that will make you feel like dancing, created by geniuses of 1890s: Cheret, Toulouse-Lautrec, Alphonse Mucha, and many others. Enjoy!

This all changed with Jules Cheret. Called the father of the modern poster, he invented the “3 stone lithographic process” in the 1880s. This was a breakthrough which allowed artists to achieve every color in the rainbow with as little as three stones – usually red, yellow, and blue – printed in careful registration. An extremely gifted artist as well, Cheret created more than 1000 posters over his 30 year career. Most of them advertised cabarets, theatre plays, alcohol, cigarettes… Everything we need to be in mood for a crazy New Year‘s eve party!

Click here to see Henri de Toulouse-Lautrec in rare photographs. He was a real prankster!

Meet Jane Avril in person here 🙂 Who was she? And how she came to know Toulouse-Lautrec?

Ah, Moulin Rouge… This is an iconic place for art history; it housed, entertained, and inspired countless artists in the 19th century. See some depictions of the famous can-can dance at Moulin Rouge in art!

Marcello Dudovich was an Italian painter, illustrator, and poster designer. Alphonse Mucha was one of his teachers but Dudovich is famous for developing his own distinctive style.

Mucha’s posters for Ruinart champagne are from the same period as his famous posters with divine Sarah Bernhardt!

Alphonse Mucha’s major exhibition at North Carolina Museum of Art is still available to see! For those who cannot attend – here is the exhibition review.

The people in Mucha’s poster are in a truly festive mood, sipping their Heidsieck champagne. Are you also in the mood for some artsy cocktails? Here‘s some inspiration 😉

The last two works by Jules Cheret are particularly perfect for New Year’s celebrations if you fancy costumes, masquerades, and balls!