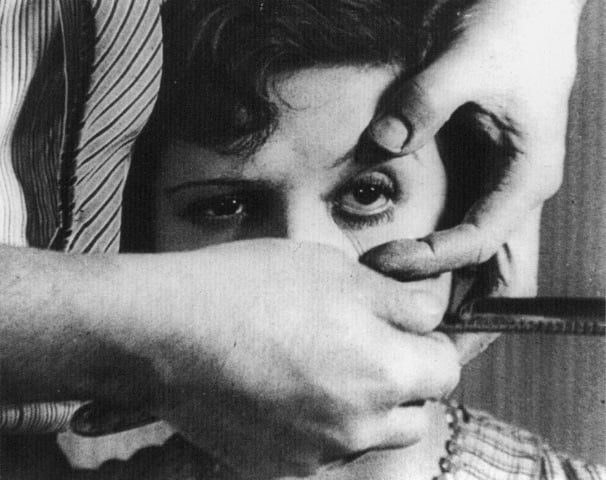 15 Books About Art to Read During Quarantine

Quarantine is already distressing us, but An Andalusian Dog is always a good tip. Above all, the movie and Surrealism, show us how art can ease harsh realities and yet be real.

The Surrealist Movement and the Cinema

Many artists contributed to this movement, among them: André Breton, Max Ernst, Joan Miró, René Magritte, Tristan Tzara, Man Ray and, of course, Salvador Dalí and Luis Buñuel. Consequently, each one had his own technique and style, but they share the universe of the abstract world. However, Surrealism was not limited to painting but was also found in literature, photography, and cinema.

Cinema took many benefits from joining with the more formal expressions of art. As a result, cinema began to create its own form, style, and language. Above all, for the first time in the history of art, Surrealism had materialized humanity’s desire to register the movement.

One remarkable product of Surrealism is An Andalusian Dog (1929) by Salvador Dalí and Luis Buñuel. As longtime friends, they wrote the script together and Buñuel edited it. Certainly, Dalí explored cinema, as with his paintings, the film is also based on the dreamlike themes, and provokes diverse reactions among viewers.

The first sequence of the film is emblematic and gave the film its notoriety as it was a bold and very shocking scene for the time. We are introduced to a man, played by Buñuel himself. He is restlessly sharpening his razor, then he decides to go out and smoke a cigarette on the balcony.

It seems that something distresses him. The next scene is a medium plane of a woman’s face, Simone Mareuil, who is sitting motionless with her eyes open. After that, we see again the big moon from his balcony and a cloud passes in front of it. Likewise, as the cloud that cuts the moon, the girl’s eye is cut by a razor.

As a result, this raccord of movement (technical cinematographic term to change one plane to another ensuring their coherence) provokes from us the most diverse interpretations. Among them, the film brings us closer to the character, to feel his anguish, and then invites us to cut the ties of our addicted gaze on daily life to create new realities. Certainly, it is interesting to see the movements of art and how a 91-year-old film can transcend its own time.

Consequently, we feel like the man played by Buñuel because we are also trapped in our homes and are anxious of our new reality. In the same vein, the action of the razor that cuts the woman’s eye is like the situation we are facing with Covid-19. It invites us to break with our old habits, and encourages us to see things differently, to find a new manner of organizing ourselves.

The Perception of Time

A little further along in the film, Mareuil’s character is inside an apartment by herself and she is surprised by the presence of Pierre Batcheff’s character. Meanwhile, he is looking at his hand and as a result, she tries to understand what is going on. Next we see both of them with the same reaction because his hand is full of ants coming out from inside of it.

Therefore, Simone’s mimicking of Pierre’s reaction, suggests to us the unconscious of the character. This is because it makes us reflect on a state they share and on him being her probable alter ego.

Thinking about other works by Dalí we recall The Persistence of Memory. Perhaps one of the most popular images of Surrealism, it was painted a few years after this film, in 1931. This work was completed two hours after his companion, Gala, returned from the cinema. She found the painter in his studio with what would be one of his most remarkable and well-known paintings.

As a result, we notice similarities in Dalí’s two works in relation to the use of the ant and the very impression of time. In other words, when Dalí painted them on top of the only object in real form, it shows repulsion towards the way we organize ourselves and how we understand daily life. Therefore, the insect symbolizes an association with putrefaction.

However, by showing the insect in the hand of the character in the film, we can relate Dali’s criticism about time. Coincidentally, the way the actor is looking at his hand is similar to how one looks at a wristwatch – or, in contemporary times, a cell phone.

Thus the effect is that Surrealism gives us room to bring artworks closer to our reality in many ways. The differences in interpretation that each piece of art is, in The Persistence of Memory reveals our desire to have some time for ourselves. Meanwhile An Andalusian Dog shows us that we don’t know how to manage the time. This is mainly because it’s something we are not used to.

All in all, like the characters, we face time and feel disturbed, like there are insects inside us. Therefore, we are facing something new, being in an uncertain quarantine period. Now we have more personal space and we can dedicate more time to ourselves.

In several passages of the film, we see the interaction of search and escape between the characters. Indeed, the impression that this gives is that the characters can be a projection of their unconscious selves, as we have seen.

Likewise, at the beginning of the film, we see a scene in which he begins to touch her and to desire her. However, before she surrenders to him, she denies it. As has been noted, this motion allows us to see the interaction with her own subconscious about her feelings.

This “catch-all” action is recurrent among the characters and practically drives the rhythm of the film. When these actions happen we listen to the leitmotiv (cinematographic term for theme music in movies e.g. the music that appears along with the shark in Steven Spielberg’s Jaws).

Within the Surrealist movement is the painting Attempting the Impossible by René Magritte, from 1928. We see a painter trying to paint the feminine nude. However, he doesn’t use the conventional canvas to do so.

The work is loaded with metaphors. The artist portrayed in the painting is its own creator in an attempt to make it a self-portrait as well. He also creates a new reality for this representation, using tools from the unconscious.

Analyzing this painting we see many similarities with the film. This allows us to draw parallels in our own lives, now. We miss other human interactions. Even if some people are not confined alone, they are still confined in their minds. Also sometimes we find ourselves trying to escape from certain ideas and desires, like the desire to go out or the anxiety that often talks to us.

After so many attempts by the character to leave her apartment her wait finally comes to an end. When Simone leaves, the film jumps straight to a beach and her whole expression changes. She finds her boyfriend, they kiss pleasantly after so long waiting, they walk together and the film ends.

Once again, we identify ourselves with the character of Simone, and just as she does, we want to live life outside our apartments. We want to make choices again, be able to walk, and circulate through public spaces.

However, we must remember that we did not go through all this suffering to live life in exactly the same way. We must take advantage of this moment which has given us time to reflect on how we can lead a life that is more humane and respectful of the planet, since the very appearance of this virus is a consequence of our neglect of other lives on Earth.

As we have seen, the Surrealist movement works with the merger of oneiric and real elements. This give us an openness to broader interpretations, since they start from the subjectivity of each.

Above all, each time we look again at this work of art we will always have new perceptions and possible interpretations. The movement brings together other ways of understanding ourselves and our reality.

The very emergence of Surrealism, amidst the World Wars going on, was a period practically without hope. Even so, it appeared and expanded artistically to form an art manifesto, at that moment generating a fertile ground for creation.

The great beauty of art is that it is timeless and part of the assumption of things we find in nature. As defined by art historians such as Gombrich and Focillon, forms repeat themselves in space and time. Watching An Andalusian Dog is refreshing in times of uncertainty.

Seeing that a film that is almost a hundred years old continues to be so relevant certainly reinforces the needs of our contemporary lives. This is because it gives us the opportunity to understand that art is essential to human life, and liberates us.

Therefore, this health crisis allows us to see that through art we can get closer to our human essence. We must stimulate the creation and appearance of new artists.