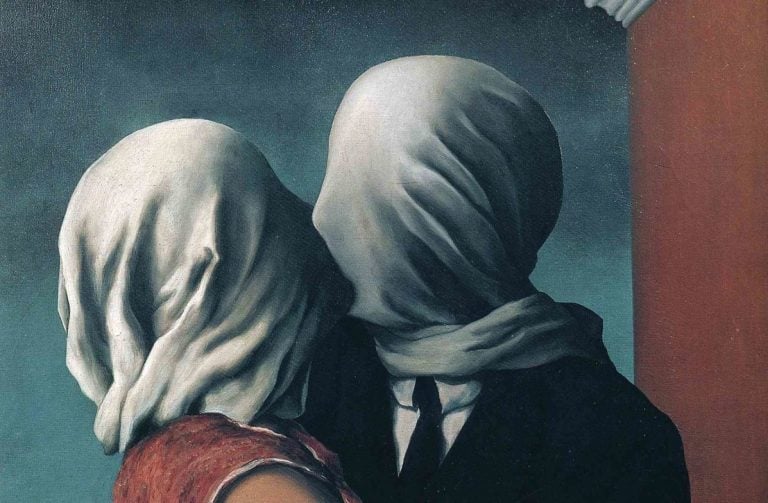 I love to watch people looking at his art for the first time. René Magritte’s art became well-known for a number of witty and thought-provoking images which during first contact, often cause a brain error. And it’s understandable when we connect Magritte to Surrealism. He often depicted ordinary objects in an unusual context, his work is known for challenging observers’ preconditioned perceptions of reality.

Here we have 14 images painted by René Magritte for you, that can be described as “weird.” While looking at them, don’t forget to have a look at the object’s title. It usually gives an additional layer of the interpretation of the painting.

1. The Treachery of Images

The absolute classic. The Treachery of Images highlights the gap between language and meaning. Magritte combines the caption and the image in such a fashion that he forces us to question the importance of the sentence and the word. “Pipe,” for instance, is no more an actual pipe than a picture of a pipe can actually be smoked.

Frustrated desires are a common theme in Magritte’s work. A barrier of fabric prevents the intimate embrace between two lovers, transforming an act of passion into one of isolation and frustration.

Magritte was fascinated by the seductiveness of images. You see a picture of something and you believe in it. But Magritte knew that representations of things can lie. These images of men aren’t men but just pictures of them, so they don’t have to follow any rules. So “raining men” is absolutely “true” in this case.

Here, Magritte paints himself painting his perception of the future. The artist is painting more than what is right in front of him: he is painting the possibility, the potential, the future. Hence the name of this painting: clairvoyance.

6. The Palace of Curtains III

Here we have the equivalent visual and verbal signs for the concept ciel (French for “sky”) in two identically shaped panels: in combination, these puzzling components show the complex relationship between words and images, as well as the tropes and conventions of painterly representation.

Look what happened here. Memory with a wound on her head. Is a memory bleeding out? Will the memory be lost if the wound is not bandaged and the blood flow stopped? Does the effort to remember heal the wound and thus stanch the bleeding?

The painting highlights a number of themes common in Magritte’s work. It is also one of many paintings to play with the concept of scale by juxtaposing objects normally of different sizes.

Here Magritte associates two objects with opposing functions – repelling and containing water. Magritte wrote in a letter to his friend:

“For the picture with the umbrella and the glass of water, I have reverted to the first title –Hegel’s holiday and not “The philosopher’s holiday” – The first title: “Hegel’s holiday” on second thoughts and after discussion was thought to be preferable – I had doubts because of a way of looking at things (like the Nazis) who credit Hegel with tastes corresponding to their tastes for gas-chambers, stupid racialist ideas and cannon-fire. This way of looking at things mustn’t be taken into account at all, that would be to side with the brutes and to relinquish another conception of life which gives way to the more beautiful and the good. Hegel wrote enough fine and good things for those things to be remembered in the first place, the remainder, if there is a remainder, can be left to those people with a taste for the mean and the ugly.”

The painting was created for Surrealist patron and Magritte supporter Edward James. The title of the painting translates to English literally as “Ongoing Time Stabbed by a Dagger”. Magritte wasn’t happy with the generally accepted translation Time Transfixed mostly known until this day. The original title was much more proper because Magritte hoped that James would hang the painting at the base of his staircase so that the train would “stab” guests on their way up to the ballroom. James instead chose to hang the painting above his own fireplace.

This work is based on Le Balcon, a canvas by Édouard Manet. Precisely by these frequent references to other artists, Magritte manages to make art itself the subject of discussion. The idea of personalized coffins was conceived following a drawing of a sitting coffin. Subsequently, Magritte “coffined” three well-known compositions from the history of art. This is one of them.

Here, loaves of bread insist on being looked at anew as they float by a window. Bread on the table we can take for granted but bread floating by a window?

Depicting the leaning tower of Pisa “supported” by a feather, this painting is a remarkable example of the way in which Magritte’s art appropriates images from popular culture, and turns them into fantastic compositions.

Of this work, Magritte wrote:

Man is a visible apparition like a cloud, like a tree, like a house, like everything we see. I don’t deny his importance and neither do I accord him any pre-eminence in a hierarchy of the things that the world offers visually.