Allegories of Autumn – A Top Ten of Sensational Symbolic Artworks 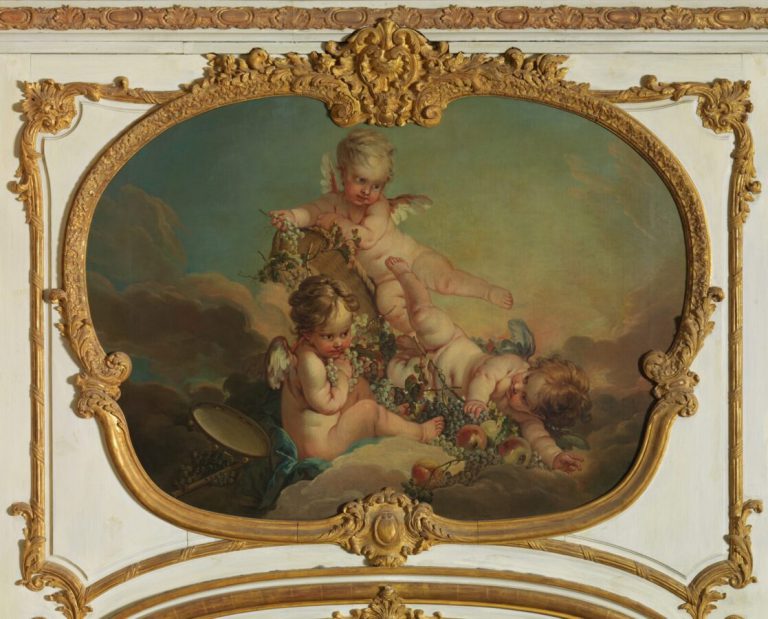 What does Autumn mean to you? Traditionally it meant the abundance of the harvest, a celebration of ripeness and maturity. Museums and galleries are full of paintings which pay tribute to this theme showing the Allegories of Autumn. But to our modern eyes, the allegorical symbols used can seem a little nostalgic or unreal. Not many of us spend Autumn at tables piled high with wheat sheaves and grapes. Or cavorting with cherubs!

So, you may ask, is this worldwide wealth of allegorical Autumnal art relevant to us today? Well, here is my top ten Allegories of Autumn, to persuade you that it’s not all pumpkins and putti and that many of these artworks are as strange, interesting and beautiful today as they were when their oils and glazes were still drying.

Our headline painting, above, is everything you’d expect from a traditional allegorical scene – the free-floating naked putti, grapes and ripe peaches. Boucher‘s voluptuous Rococo scenes made him possibly the most celebrated artist of the 18th century. However, he rarely made these decorative panels himself, allowing his workshop to churn them out instead. Very Damien Hirst!

Surprised this is a Cezanne? This was painted while he was still a law student, searching for his own particular style. This ‘Barbie’ look-alike with her waspish waist was one of the paintings that convinced his banker father to allow him to move to Paris to study art just one year later.

When your patron is a keen botanist, what do you paint? Mr Potato Head, of course. Giuseppe Arcimboldo is famous for his vegetal-inspired works, but this one is spectacular. The dark background hints at the chill to come, but the burst fig as an earring is a definite fashion tip to take away.

Mucha was a Czech painter, illustrator and graphic artist and his style is instantly recognisable. We still find the traditional symbols and colours of Autumn, but with a distinctly Art Nouveau twist. As ubiquitous as Van Gogh’s Sunflowers, Mucha’s images can be found on tea-towels, glassware, posters, scarves and tote bags in shopping malls across the globe.

The intense feeling of melancholy and vulnerability in this painting is echoed by the tragically short career of this Pre-Raphaelite artist. Arrested and imprisoned for homosexual activity, Solomon died in the Victorian workhouse after two stints in lunatic asylums, his brilliant career blighted by alcoholism and society’s prejudice.

If you live near water, you know that Autumn is a time for waterbird migration. This is as true today as it was in 18th Century Asia. This swan goose looks as vivid and real as it did all those centuries ago. Some things never change.

Okun was a symbolist painter and illustrator, born in 1872. He’s not well-known outside of his native Poland, but I think this luminous party of Autumn sprites is very pretty. Although the princess riding the horse seems better dressed for the season than her scantily clad hand maidens. I couldn’t source a date for this image, so if any Okun enthusiasts out there know better, get in touch.

This is the wild-card entry. Best known for his Wounded Angel painting, Simberg was a symbolist who loved the supernatural. His paintings were often macabre and unusual. This one seems to show a skeletal figure, partly rooted in the ground, chewing on a tree trunk, as leaves fall. What can I say, timeless!

Moody, allegorical paintings were the calling card of this reclusive American artist. This is his earliest documented work, and the soft lines and loose brush work are mesmerising. The serene figure seems to glow in the falling light.

Teniers married in to the famous Breughel family and was a friend of Rubens. He was famous for his peasant scenes. This incredibly versatile and prolific Flemish baroque painter has captured the very essence of Autumn for me. The moment I move from white wine spritzers and summer dresses to red wine, woolly tights and cardigans. Sante!

So, there is my top ten. Controversial perhaps, excluding many of the great names of art history. Do you have other suggestions?

I will leave you with a quote from Albert Camus, who said: “Autumn is a second Spring where every leaf is a flower.” So, enjoy your Autumn, whether you are harvesting, drinking, cavorting or just meandering around the suburbs as the leaves fall.