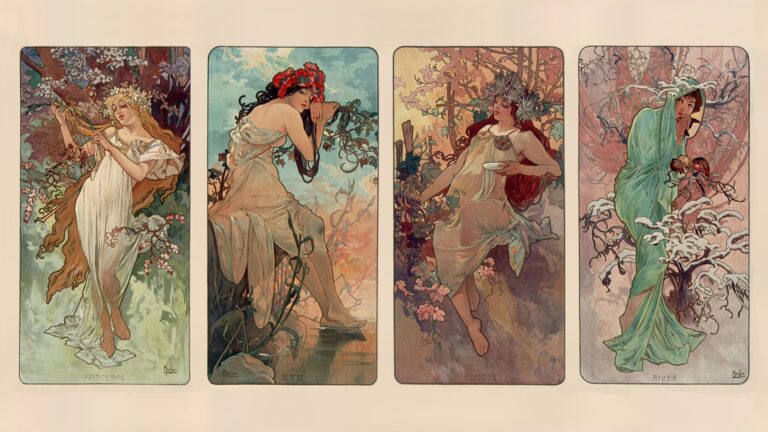 Alphonse Mucha is perhaps the artist most publicly associated with Art Nouveau. Today we explore the life and work of the Czech master. This month we’re partnering with Europeana again to celebrate their fantastic new Art Nouveau season (21 February - 29 May). The season explores the depth and diversity of the influential art movement and features beautiful Art Nouveau jewellery, posters and much more. It is led by a major new exhibition that tells the story of Art Nouveau from its origins to its brilliant heyday, and features fifty artworks from more than twenty museums. [caption id="attachment_3926" align="aligncenter" width="620"]

Girl with Daisy, 1900 Alphonse Mucha Museum of Decorative Arts, Prague. CC0[/caption] In 1860, Alphonse Mucha was born in the Moravian town of Ivančice, in today’s Czech Republic. From an early age Mucha loved painting and drawing and his first artistic job was designing decorations for a Moravian theatre company. Having trained as an artist at the Munich Academy of Fine Arts, Mucha traveled to Paris in 1887 to continue his artistic education. He took an illustration job at the magazine La Costume au Théâtre and established his own studio in the city centre. [caption id="attachment_3927" align="aligncenter" width="412"]

The Seasons, 1896 Alphonse Mucha National Library of France. Public Domain.[/caption] Art Nouveau’s infatuation with nature encompassed the seasons and this subject was perfectly expressed in Mucha’s 1896 series of that name. It depicts four beautiful women, each one set against a natural backdrop that evokes the mood and colour of the season. Spring stands daintily among blossoms and birdsong, Summer wears a garland of poppies, Autumn harvests wild fruits and chrysanthemums, whilst Winter wears a cloak to insulate herself from the cold and snow. [caption id="attachment_3929" align="aligncenter" width="620"] 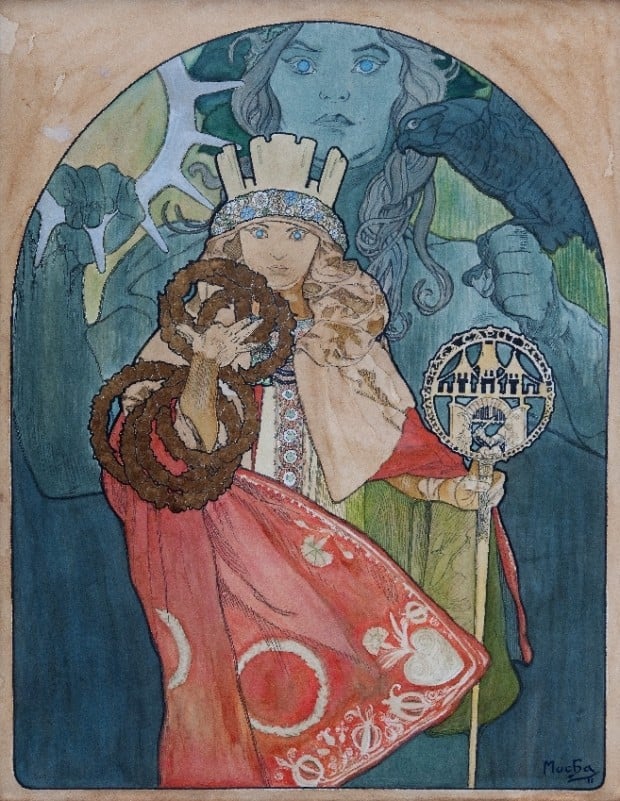 Poster for Sokol festival in Prague, 1912 Alphonse Mucha National Museum of Prague. CC-BY[/caption] Mucha’s distinctive style became sought after by advertisers and much imitated in the rapidly growing mass media of the period. Mucha created advertisements for companies such as the biscuit firm Lefèvre-Utile and the champagne maker Ruinart Père et Fils. Many of these commissions contained the signature Mucha elements: women with long curly hair (some of Mucha’s critics used to call the hair “macaroni“), organic forms and soft colours, especially gold. Despite the great fame that Mucha’s commercial art brought him, he preferred to see his work as being personal, spiritual and national. Mucha asserted himself as an artist capable of more than just Art Nouveau style and in his later career he focussed more on personal projects.