The Wounded Angel By Hugo Simberg 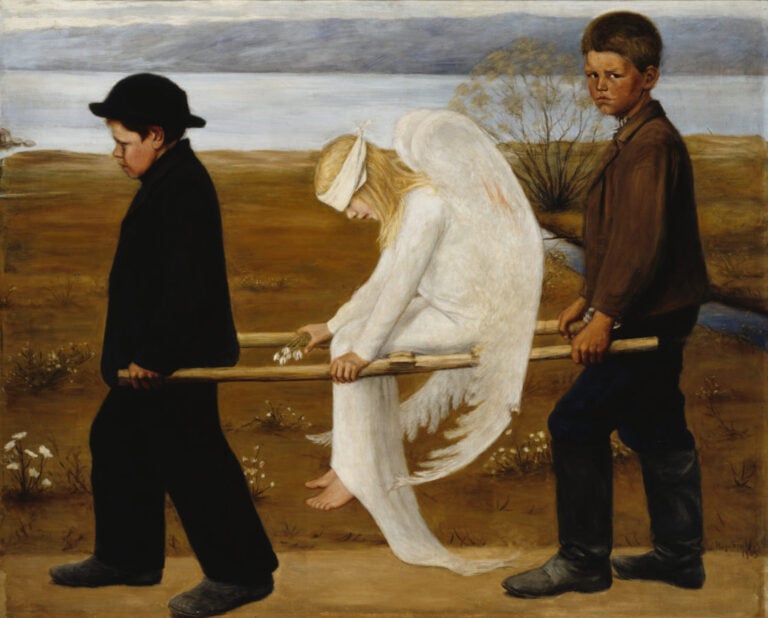 Two boys carry a stretcher, bearing an angel dressed in white. The angel is clearly ill – her eyes are bandaged, the wing is bloodied and she can barely hold onto the stretcher. This painting, entitled The Wounded Angel, was created by the Finnish symbolist painter Hugo Simberg who painted it in 1903. It is one of the most recognizable of Simberg’s works, and was voted Finland’s “national painting”.

The procession passes through a recognizable landscape, that of Eläintarha, Helsinki, with Töölönlahti Bay in the background. The pathway along Töölönlahti Bay remains there to this day. In Hugo Simberg’s time, the park was a spot popular among the working classes for leisure-time activities. At the time, many charity institutions were located in Eläintarha park; in The Wounded Angel the healthy boys are carrying the injured girl towards the Blind Girls’ School and the Home for Cripples. She clutches a bunch of snowdrops, symbolic of healing and rebirth.

Simberg himself hated to explain his works and he always refused to do so, suggesting that the viewers draw their own conclusions. However, it is known that the artist had been suffering from meningitis and that the painting was a source of strength during his recovery. This can also be read metaphorically: meningitis is known to cause neck stiffness, lethargy and light sensitivity, each of which is exhibited by the central figure. If read as lungs rather than wings, such a diagnosis even explains the minor injury, as tubercular meningitis causes abrasions to the upper lungs.

Hugo Simberg spent many years preparing The Wounded Angel.  He left plenty of sketches and photographs which now tell us about its progress, e.g. at the beginning, the angel was pushed in a wagon by small devils.

Simberg developed the painting in his studio in Helsinki, and finished it in summer 1903 at Niemenlautta. It has been suggested that some of the last sitters for the angel were Gertrud and Adrienne, daughters of Karl Magnus Gadd, the town physician of Viipuri, whose family members were regular summer guests at Niemenlautta.

Simberg’s painting, when exhibited, became a massive success. He wrote about the opening of the exhibition in the letter to his sister, Blenda:

“I want to share the good news with you – I was not rejected this year, even though the jury was terribly strict. It almost seems that I have achieved something of a grand succés among my colleagues and the members of the jury. Gallén is so excited that I can hardly take him seriously. His first words were the highest flattery of my work and, oddly, he seems quite beside himself with enthusiasm for the big painting. He said it gives him the impression that I had stood alone in a little cabin, huddled in the midst of a great forest with tree roots growing up to the corners of the cabin, and had painted in complete indifference to the outside world. He says that it radiates peace and harmony like no other work in the exhibition. – Even Edelfelt said nice things to me.”