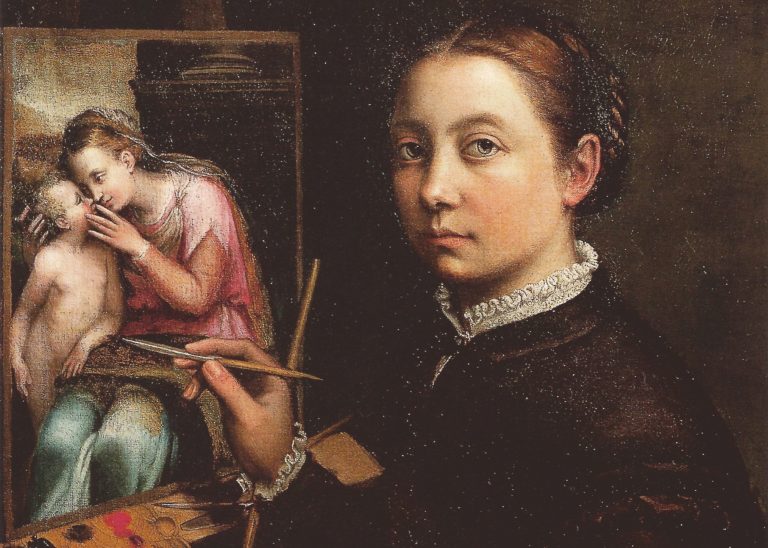 Throughout history, art has always played an important role in royal propaganda across Europe. Royal families were in a race to employ the best painters of their time. Court painter positions were generally filled by male artists; however, there were many female painters whose talents were beyond imagination. We explore the stories of four ambitious female court painters who broke the norms and had extraordinary careers despite the difficulties they had to endure due to their sex.

Levina Teerlinc was born in 1510 in Bruges in an area called Flanders, which is now part of Belgium. She came from a family that had deep roots in illuminating tradition. Her father, Simon Bening, was a well-known illuminator in Flanders as well as her grandfather. Her early art education began at her father’s workshop.

By the 1540s, Levina turned her attention to a newly emerging genre of painting: miniature art (historically known as limning). Miniatures, often coming in the form of portraits, were a preferred fixture at the Tudor court. They were small enough to be carried with their owner, usually mounted in a piece of jewelry, and were given as presents during marriage negotiations or for Christmas. In 1545, she married an Englishman named George Teerlinc and moved to England.

The same year, she received a job offer by Henry VIII following the death of the previous artist, Hans Holbein the Younger, to become the new court painter. As a sign of her growing reputation and skill, Teerlinc earned an annual sum of 40 pounds. It was a higher rate of pay than what her predecessor received. During her long career, she served under all four Tudor monarchs: Henry VIII, Edward VI, Mary I, and Elizabeth I. She passed away in 1576 at the age of 66.

Attributing paintings to Teerlinc is challenging because she did not always sign them. However, she was the only court miniaturist between 1545 and 1570. Therefore, miniatures dating back between these years possibly belong to her.

Sofonisba Anguissola was born in Cremona, Lombardy in 1532. She came into a family with noble ties and was the eldest of seven children, six of whom were girls. Her parents were supportive of their daughters receiving an education in the arts; however, Anguissola outshined them with her talent for painting.

In 1554, Anguissola traveled to Rome to broaden her sketching skills. While in Rome, she met Michelangelo. He showed an interest in Anguissola’s works and encouraged her to study his sketches. For at least two years, Anguissola continued this informal study, receiving substantial guidance from Michelangelo.

In 1558, as an established painter, Anguissola went to Milan, where she painted a portrait of the Duke of Alba. The satisfied Duke, in return, recommended her to the Spanish king, Philip II. The turning point in Anguissola’s career came when she received an invitation to become a court painter for Philip II. The following year, she became one of Queen Elisabeth of Valois’s ladies-in-waiting. Anguissola and Queen Elisabeth became close friends and confidants in a short period. She shaped the Queen’s artistic style and tutored her two daughters in art. During her 10-year residence, Anguissola painted many official portraits for the members of the court. When the Queen died in 1568, Anguissola left the court and moved to Palermo.

Shortly before her death in 1625, famous Flemish painter Anthony van Dyck paid a visit to Anguissola. He recorded sketches from his visit. Her championed success opened the way for women to pursue a career in arts. Lavinia Fontana expressed her enthusiasm for painting in a letter surviving from 1579 with these words:

I have my heart set on learning how to paint after seeing one of Anguissola’s portraits.

Lavinia Fontana, in a letter written in 1579.

Rachel Ruysch was born in June 1664 in The Hague, Netherlands. Her father was a scientist, Frederik Ruysch, and her mother, Maria Post, came from a family of architects and artists. Frederik was an anatomy professor and had a vast collection of animal skeletons and botany samples. At a young age, Ruysch began to practice her drawing skills by sketching pieces from her father’s collection.

When Ruysch reached her teenagehood, her parents started appreciating her talent in art. In 1679, Ruysch was apprenticed to Willem van Aelst, who was known as the best still-life painter in Amsterdam. Under van Aelst’s supervision, Ruysch mastered her skills in painting flowers. By the time Ruysch was 18 years old, she was selling paintings that bore her signature. During the second half of the 17th century, still-life paintings depicting flowers rose in popularity, which benefitted Ruysch.

In 1693, Ruysch married a portrait painter, Juriaen Pool, with whom she shared ten children. Unlike many other women from her time, throughout her marriage, she continued to practice her art and produced commissions for an international circle of patrons. In 1699, she moved to The Hague from Amsterdam with her family as she was offered membership at the Confrerie Pictura, an academic art club formed by local artists in 1656. She was the first female member of the club.

In 1708, Johann Wilhelm II, Elector Palatine invited Ruysch to work as a female court painter in Düsseldorf. She received an annual salary, for which she had to produce one painting per year for the royal art collection. Ruysch enjoyed great fame in her lifetime. When she died in 1750, she was honored with 11 poems about her and her art. This was a unique gesture for an artist. She usually sold her paintings for prices as high as 1200 guilders. In comparison, Rembrandt never managed to sell his paintings for more than 500 guilders.

Adélaïde Labille-Guiard was born in 1749, the youngest out of eight children. Her father owned a small business. She received formal training under a family friend named François-Elie Vincent. Women in the 18th century were not allowed to take classes at the Royal Academy of Painting and Sculpture. She first trained as a miniature painter, which was the genre widely accepted by society for women to adopt. In 1774, at the age of only 25, she displayed two of her paintings at the Salon. Shortly afterward, she broke gender norms by painting in oils.

In 1793, Labille-Guiard won admission to the Academy. She was among four female students who were presented with the honor that year. The same year, she also earned the title Peintre des Mesdames (painter to the king’s aunts). She started receiving a government pension and later had an apartment at the Louvre. There, Labille-Guiard tutored many female pupils who went on to have successful careers. She was the first female artist to receive permission to set up a studio for her students at the Louvre.

Labille-Guiard’s portraits were particularly striking in their attention to detail. She was outstanding in painting luxurious folds and layers of skirts in fashion. Her most significant painting that survives today is the Self-Portrait with Two Pupils. Signed and dated 1785, it was on display at the Salon in the same year. The life-size portrait shows a woman seated before her easel teaching younger women how to paint. The two main distinguishing features of this painting are choosing to show herself practicing her profession and including her female pupils with her. It is visual proof of Labille-Guiard wanting to establish herself as an actively working professional.

In 1783, she became a court painter for the French royal family. Through her position as the court painter, she earned a pension of 1,000 livres. In 1789, instead of fleeing Paris, she stayed in France during the French Revolution. In 1793, she had to submit some of her royalist paintings to be burned by the nationalists. Because she maintained a low-key profile throughout The Terror, she received further commissions for portraits and enjoyed a long career until she passed away in 1803.