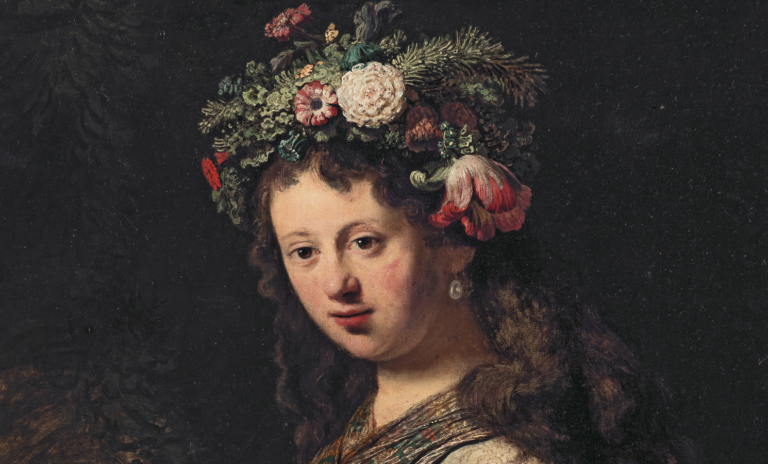 Rembrandt painted his wife Saskia van Uylenburgh as Flora, goddess of spring and flowers, three times during their relatively short but meaningful marriage. He created the first portrait shortly after the wedding. It shows his beloved wife in all her beauty and glory, underlined by the mythological costume.

The earliest portrait comes from 1634. It was a happy year for Rembrandt – the year of their marriage. In this work, he combined elements of pastoral and historical portrait and the painting visibly shows the love and admiration the artist felt for the young woman.

Saskia van Uylenburgh (1612-1642) was the daughter of the burgomaster of Leeuwarden and a cousin of Hendrick van Uylenburgh, an influential art dealer with whom Rembrandt worked in the years 1631-1635. Marriage with Saskia brought him a large dowry and elevated his social status. The couple was in love and Saskia posed often to a large number of Rembrandt’s portrait.

Unfortunately, the marital idyll didn’t last long. Three of their children died shortly after birth and were buried in the nearby church called Zuiderkerk. The sole survivor was Titus, who they named after his mother’s sister Titia (Tietje) van Uylenburgh. Following this, Saskia died the year after he was born, in Amsterdam, aged 29, probably from tuberculosis. She was buried in Oude Kerk.

Saskia allowed Rembrandt to use their son’s inheritance as long as he did not remarry. That is to say, if Titus died without issue, Rembrandt would be the heir of the movable property. Rembrandt hired Geertje Dircx as a wetnurse; in 1649 she expected him to marry her. The next year Rembrandt had her locked up in a house of correction when Hendrickje Stoffels became his new housekeeper and mistress. In 1662 Rembrandt, having been in financial trouble for several years, sold Saskia’s grave. Hendrickje died the following year.

In Roman religion, Flora was the goddess of flowers and fertility. Her festival, the Floralia (April, 28-May, 1) was celebrated with great cheerfulness, happiness, and sexual extravagance. The legend says that one spring day, she was walking through the fields when Zephyrus, the wind of spring, saw her and fell in love with her. He stole her away and they married. To prove his love for her, he allowed her to reign over all the flowers in gardens, meadows, and cultivated fields. Among the many gifts that the goddess brings to humans, such as an infinite variety of flowers, is also honey.

Rembrandt depicted the woman he loved as a woman of pleasant appearance, adorned with jewels and precious fabrics. The pathos of splendor and sharp realism rather than the divine beauty of the richly dressed young woman suggest that the portrait may have been a preliminary study for a historical or biblical figure of a woman that Rembrandt was painting around this time. But it’s only an assumption!

Rembrandt painted Saskia as Flora, goddess of spring and flowers two more times. One in 1635 which is displayed in the National Gallery in London. A few years later, Rembrandt painted his wife in this mythological costume again (in 1641, only a year before her death). Saskia is depicted with a red flower, the painting is part of the collection of Staatliche Kunstsammlungen Dresden in Germany.