The Lost Portrait of Henry VIII: Art in Service of Power 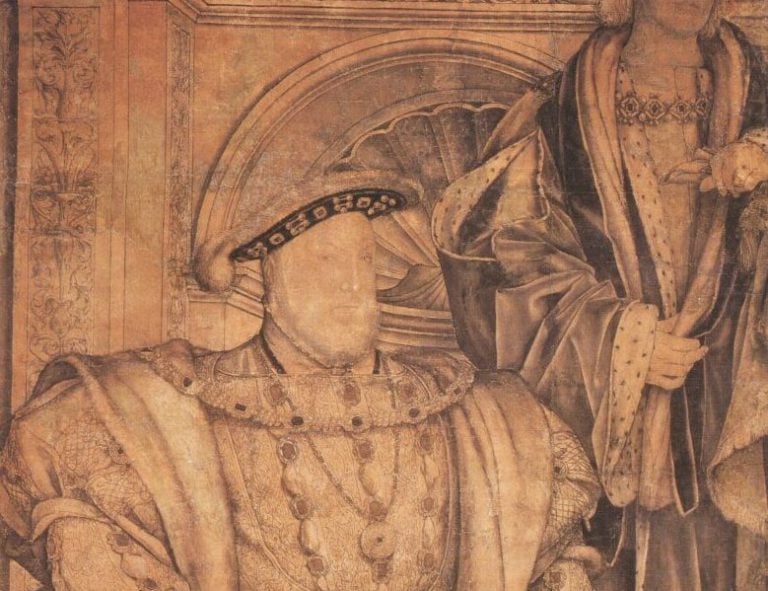 Posing proudly in front of the fascinated spectator, a monarch fixes us with his majestic gaze. Perhaps you recognized the best known portrait of Henry VIII, by this simple description, but which painting are we talking about exactly? In fact, there are over twenty versions of this famous portrait!

In this painting, Henry is portrayed with some of his characteristic features; a thick, pale face; small piercing deep black eyes, and, an impeccably trimmed beard. The best known portrait of Henry VIII, King of England and Ireland from 1509 to 1547. There are over twenty versions of this portrait even though the first work has disappeared.

Originally part of a wall decoration in Whitehall Palace,London, the Portrait of Henry VIII is the lost work of Hans Holbein the Younger. It was destroyed in a fire on 4th January,1698, which devastated the royal residence. Fortunately, numerous copies were preserved. For the most part, it’s been established that they came from the workshop of the German painter. This piece of art allows us to appreciate the virtuoso touch of Holbein in his representation of, arguably, the best known King of England.

Hans Holbein the Younger (c. 1497-1543) came from a family of German painters. In around the year 1515, he left for Basel where he entered the studio of Hans Herbst, the most famous painter in the city. Holbein began his career working for printers,drawing ornaments for books, before specializing in portraits during the late 1520s. In 1532, he returned to London, he’d made an initial trip a few years earlier. It was during this time that the French ambassador, Jean de Dinteville, commissioned him to paint the famous painting, The Ambassadors in 1533. It propelled Holbein onto the political scene and allowed him, in 1536, to obtain the title of “King’s Painter” Henry VIII. The latter has remained in the collective memory as a tyrannical monarch. However, he was also an accomplished patron, appreciating painting and music and surrounding himself with the best artists of his time. This period was the height of Holbein’s career. He obtained numerous commissions such as portraits, of course, but also jewelry projects and wall decorations.

It was between 1536 and 1537 that Henry commissioned Holbein to decorate the King’s chamber in Whitehall Palace, (acquired in 1530 by the English sovereign following the fall of its former owner, Cardinal Thomas Wolsey (c. 1471-1530)). The copy of the bedroom decor, made by the Flemish painter Remigius Van Leemput (1607-1675), allows us to place the portrait of the King in its original context. Around a marble plinth, three figures stand alongside the King: his favorite wife, Jane Seymour, and the parents of Henry VIII, Henry VII and Elizabeth of York.

Unquestionably, the iconography indicates that the commission was made during the brief marriage between King Henry and Lady Jane Seymour. It is quite possible that this decoration was intended to celebrate the birth, in October 1537, of Edward, the heir to the throne long awaited by the King. In this case, the function of all of this lost scenery would be easily identifiable. The aim of the work was to glorify the Tudor dynasty and celebrate the continuity of its seat on the thrones of England and Ireland.

According to copies of the wall decoration by Holbein, the rendering of the majesty of Henry VIII comes first of all through his posture. The King, in front of us, imposes his presence on us through his dominant attitude – hands on hips in some versions, but above all with legs apart and firmly anchored to the ground. The viewer cannot fail to be struck by the almost heroic stature of the King. The thick texture and rich craftsmanship of his clothes only accentuate the authority that emanates from the royal person. Ornaments and jewelry, on the other hand, are deliberately indicative of the wealth of the King, ruler of one of the most powerful kingdoms in 16th century Europe. The original painting was further adorned with gold leaf emphasizing the wealth and opulence of the King’s surroundings.

However, the royal attributes are ultimately quite absent for an official work of this stature; only a sword or a dagger adorn some copies. With regard to the official royal portrayal of other contemporary European powers, portraying a royal subject devoid of attributes such as the crown or the scepter is actually… rather common. In his portrait painted by Jean Clouet around 1530, Francis I wears as the main attribute of his authority the collar of the Order of Saint Michael of which he is the grand master. Apart from this iconographic detail, it turns out that, as in the case of Henry VIII painted by Holbein, Francis I is simply wearing a simple beret and some jewelry. In the portraits of the two great rival kings, the imposing stature of the sovereign is highlighted more by rich costume than by the wearing of a crown. These iconographic clues are reminiscent of the Italian journey of Holbein, who learned, on the spot, of works of the Italian Renaissance.

Yet Italian and French touches aren’t the only hallmarks of Holbein’s style. Remember, Hans Holbein the Younger was German. His art is unmistakably characterized by the pictorial accuracy so dear to the Dutch masters. His meticulous touch reveals an important attention to detail on the part of the artist. Concerned with truthfulness, Holbein portrays the precious clothes and fabrics surrounding Henry VIII with remarkable thoroughness. The jewelry he wears – a pair of necklaces and several rings – are identifiable as the attention to material detail is so high.

This applied and scrupulous touch concerned with veracity does not apply only to fabrics. Henry’s face appears to have been perfectly studied by Holbein the Younger. Indeed, the physical characteristics of the sovereign are identifiable. The face is fat, somewhat flat, the eyes small, but lively and authoritative and the mouth small. More generally still, the physique of the King seems at first glance transcribed through an undeniable realism.

However, scholars have enjoyed comparing copies of Holbein with the various armor sets of Henry VIII in our collections; it turns out that the King actually had short legs, at least not as big as the work of the German painter lets us think. In addition, by the time he was portrayed by Holbein, Henry VIII was around 40 years old, and had suffered from several illnesses and accidents. Still, Holbein ignored this, portraying a vigorous and healthy king. The royal figure was therefore voluntarily modified by the painter in the service of the Tudor King’s propaganda.

A work in the service of propaganda

The art of portraying Henry VIII by Hans Holbein the Younger is effective. It is characterized by the upright and direct posture of the royal figure, whose features are recognizable while being idealized; stood in front of a plain background which makes the King stand out even more.

On the border between the art of the Dutch masters and that of the French and Italian Renaissance, Holbein employs his style in the service of royal English propaganda. While most of the surviving copies appear to be by students of Holbein’s studio, other artists may have copied the wall decor, with permission from the King. These reproductions also enabled King Henry to spread his image of power throughout the kingdom and also Europe; by offering them to ambassadors in order to create or strengthen alliances. It is probably these numerous copies that has made this portrait, in particular, the iconic image of King Henry VIII.