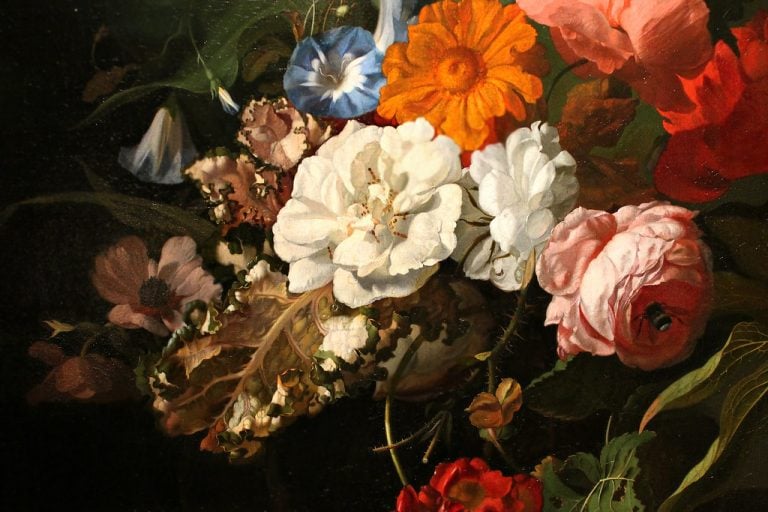 Let’s discuss one of the greatest still-life artists: Rachel Ruysch. Still-life paintings do not draw the crowds at museums. They are often overlooked and skipped by the modern museum visitor. Many can be too old-fashioned, too dull, and too boring. However, the still-lifes by Rachel Ruysch are completely different. Ruysch used flowers to tell stories dealing with the epic themes of greed, pride, and death. This is a flower painting. This is flower power.

Rachel Ruysch was born in the Netherlands in 1664. The Netherlands was an interesting region to grow and develop as a female artist. Unprecedented fame started among Dutch female artists, and Rachel Ruysch achieved an international reputation eclipsing her contemporaries. Her reputation rested on her ingenious flower compositions that combined beauty and morality. Pretty flowers can have a deeper meaning, and Ruysch used this knowledge resplendently.

Ruysch had the renowned botanist Frederik Ruysch as her father. He had a passion for observing and studying flowers and insects. He must have passed his interests onto his daughter because Ruysch is known for her floral arrangements populated by insects.

When Ruysch began painting as a teenager, the genre of still-life had been established in the Netherlands only since the 1650s. “Flower pieces,” as still-lifes were known at the time, were a revolutionary idea. Flowers were previously relegated to the background of paintings or were included as symbolic elements to highlight a religious or historical story. Flower pieces allowed flowers to be the main subject of a painting. Flowers were now worthy of attention for their own merits.

This social shift in valuing flowers was caused by the tulipmania of the 1630s. Deborah Moggach’s novel and film, Tulip Fever, captures the obsessions and speculations surrounding tulips. From 1634 to 1637 fortunes were won and lost overprized tulip bulbs. These bulbs were rarely in bloom when bought, therefore tulip books with vivid illustrations were widely referenced by speculative buyers. These books were created by leading horticulturalists and illustrators. Drawings and watercolors devoted to flowers were now socially acceptable, therefore paintings devoted to flowers soon followed.

Rachel Ruysch painted Vase with Flowers in 1700, almost a lifetime after the tulipmania of the 1630s. However, vestiges of this craze still exist in this floral masterpiece. The white tulip with the red stripes is a variegated flower. A variegated flower is one that grows two or more distinct colors in its petals. In the 17th century, the original variegated tulips were caused by a virus known as Tulip Breaking Virus (TBV).

These beautiful but sickly flowers were considered rare, therefore they were more expensive than the healthier single-colored tulips. Rachel Ruysch paints this tulip into the arrangement as a comment on greed, pride, and death.  The disease created a beauty that increased its value. Beauty was valued over health. Money and death shook hands in the artificial market of tulipmania.

As tulipmania caused an artificial market, so did Ruysch create an artificial arrangement in Vase with Flowers. The depicted flowers are scientifically accurate. They bloom with precision and a level of detail rarely matched by other artists. Ruysch knew her flowers, and because of this, she could not have painted this still-life from life. It would have most likely been painted by referencing botanical books. Why would Ruysch paint flowers she finds in a book? Why would she paint an image of an image?

The answer is nature. Nature prevents all of these flowers from blooming at the same time. Some of these flowers bloom in the Spring, some in the Summer, some in Autumn, and a couple in Winter. Time prevents this natural arrangement from being naturally possible. Perhaps only a quarter of the flowers could be painted at once, and therefore not a true still-life. Therefore, Ruysch most likely referenced botanical books, perhaps even some of her father’s books, to find the species she wanted to depict in Vase with Flowers. Ruysch uses scientific resources to create an artistic arrangement.

All of these flowers are beautiful and at the peak of life. Wrong! Incorrect! Look again. This bouquet is past its prime. While some of the flowers remain pretty and pert, some of the flowers droop and wilt. The blue iris is a perfect example. This once glorious flower is on the cusp of shedding its bloom. The edges are curling while the petals are limp with age. The light shines on both the iris bud and the iris blossom, but it is the blossom that steals the show. It has a beautifully vibrant blue blending into a deep purple. The touches of white add a bright contrast to the otherwise cool colored flower.

Why would Ruysch paint flowers past their prime? She is commenting on life itself. Life is fleeting and ephemeral. It is subjected to time and time can either nourish or destroy life. Just as flowers grow, blossom, and die so do people, animals, and anything else living. Life has its distinct stages, and Vase with Flowers showcases them. It contains the beginning with buds. It has mature flowers. It has dying and wilting petals. It has a dead missing flower.

In the center of the composition is a cut stalk. Its poppy flower head is missing. This poppy flower died, and the person who arranged these flowers cut the dead head away. The missing dead flower adds another layer of meaning to the image. It adds depth to the composition by revealing more greenery, but it also comments on the feelings surrounding death: longing, emptiness, sadness, grief, and loss. This is not a happy painting of pretty flowers. This is a painting exploring all the stages of life: happy and sad, growing and dying, past and future.

Rachel Ruysch painted Vase with Flowers with her signature style of using an asymmetrical composition. It draws the eye to move around the painting. It is not a static and predictable arrangement. Some of the flowers feel they could slip and fall over and out of the vase. It feels unstable at times, further commenting on life’s unpredictability. Because of Ruysch’s expertise as a still-life painter, she achieved much in her lifetime. She was accepted to the Painter’s Guild of Den Haag in 1701, she was the official court painter to Elector Palatine Johann Wilhelm II from 1708 to 1713, and she was internationally recognized up until her death in 1750.

Her life spanned 86 years from the late 17th to mid-18th century. She painted all throughout her life and continued up until she died. It would not be a surprise if there was a last unfinished painting by Ruysch somewhere hidden in the world. Ruysch was an inspiration in her time. Ruysch’s life inspired other Dutch women to become painters and should continue to inspire women today to become painters. Vase with Flowers is a flower painting. Vase with Flowers is flower power.