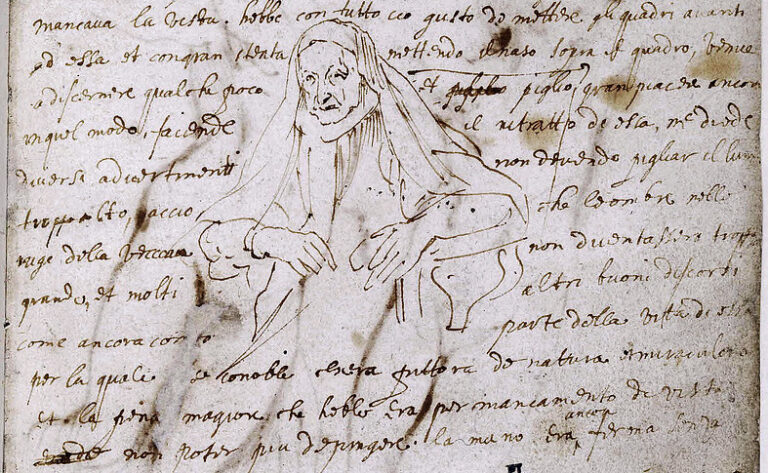 Anthony van Dyck was a Flemish painter who was born in Antwerp (Spanish Netherlands, now Belgium) in 1599 and passed away in London in 1641. From 1621 to 1627, he stayed in Italy, where he was employed with commissions and studied the works of the great masters, particularly the Venetian painter Titian. While he spent most of his time in Genoa, he also visited other cities, such as Rome, Venice, Padua, Mantua, Milan, Turin and Palermo. During his visit to Palermo in 1624, he drew a sketch that might have served as a study for a painted portrait of the Italian painter Sofonisba Anguissola. Here, we tell the story of this portrait.

Sofonisba Anguissola was a late Renaissance Italian painter who was born in Cremona around 1532 and passed away in Palermo in 1625. She worked in the court of Philip II of Spain and established an international reputation for her ability to paint portraits. At a time when women were not accepted as apprentices in the workshops of artists, most female painters came from families where the father was a painter. Sofonisba Anguissola was an exception to this rule.

She studied with painters Bernardino Campi and Bernardino Gatti and, according to a letter from her father, now found at the Buonarroti Archives in Florence, she was held in high esteem by Michelangelo. Giorgio Vasari, known for his biographies of many Renaissance artists, wrote in his Lives of the Most Eminent Painters, Sculptors, and Architects that she had not only learned to draw, paint, and copy from nature and from the works of other artists, but also produced beautiful paintings of her own.

Such is the fame of the woman that the 25-year-old Anthony van Dyck visited in Palermo on the 12th of July 1624. His notes on the visit and the sketch that he made of her are found in his Italian Sketchbook, now at the British Museum. By the time of the visit, Sofonisba Anguissola was an aged woman. Van Dyck believed her to be 96 years old. Now we know that she was actually 92 and died the following year. Therefore, this portrait is one of her last ones, along with Sofonisba Anguissola on Her Deathbed, painted around 1625.

Despite her old age, she was still lucid and her hands did not tremble. However, she could no longer paint due to loss of sight, which must have been a pity both for her and for her visitor. Nonetheless, the visit proved to be useful for the young Flemish painter. As he notes, she was courteous and had a good memory. She told him about her life and, as he was drawing her portrait, gave him some advice on the use of light. A feeling of admiration is evident in Van Dyck’s text.

More details on the sketchbook, including an image of the sketch itself as well as the full text of the notes in Italian and an English translation, can be found in Lionel Cust’s A description of the sketch-book by Sir Anthony Van Dyck, used by him in Italy, 1621-1627 and preserved in the collection of the Duke of Devonshire, K. G. at Chatsworth.

The painted portrait closely resembles the drawing in Van Dyck’s Italian Sketchbook. It is an oil painting on panel measuring 42 x 33, 5 cm. Sofonisba Anguissola is represented wearing a black dress and white veil over her head.

The painting is found at Knole, a country house and former archepiscopal palace located in Kent, England. Knole was a property of the Sackville family since 1603. In 1946, it was gifted to the National Trust and is now open to the public. However, Robert Bertrand Sackville-West, the 7th Baron Sackville, remains its guardian. How the painting arrived there is somehow mysterious. According to the information recorded by the National Trust and the Netherlands Institute for Art History, it was possibly brought by Arabella Diana Cope (1767–1825), wife of John Sackville and 3rd Duchess of Dorset. However, it was at first mistaken for a portrait of Catherine Fitzgerald, Countess of Desmond.

In 2012, the portrait of Sofonisba Anguissola was accepted by the British government in lieu of Inheritance Tax and allocated to the National Trust. It is now on display in the billiard room of the house, where it can be admired along with a portrait of Caterina Cornaro painted in the manner of Titian. More details on Knole’s portraits are found on the website of the National Trust.

To learn more about Sofonisba Anguissola, I recommend Errika Gerakiti’s review of the book by Chiara Montani Sofonisba, Portraits of the soul and Magda Michalska’s article, My name is Sofonisba And I’m Michelangelo’s Gal.