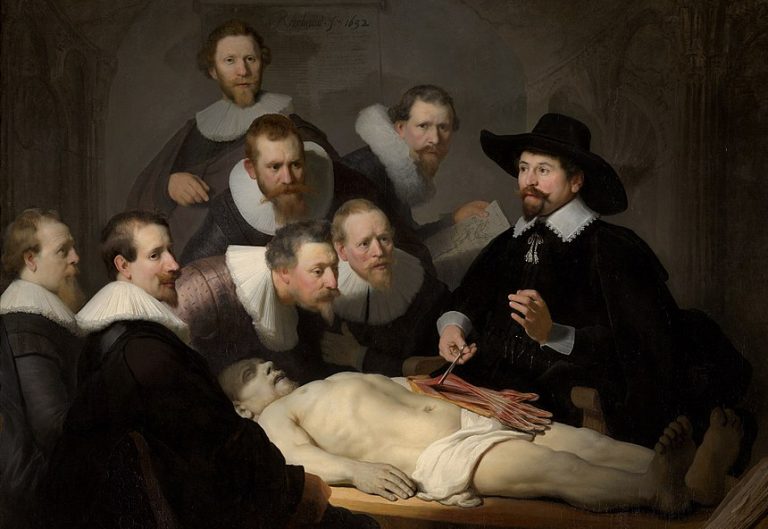 Rembrandt painted this group portrait of seven surgeons and the physician Nicolaes Tulp in 1632. He was only 26 years old at that point. Nicolaes Tulp was a famous doctor, the head of the Guild of Surgeons. He trained Amsterdam surgeons at practical demonstrations in the anatomy theatre twice a week. But once a year there was one public autopsy, conducted in the winter because the stench of the body would have been unbearable at any other time. It was the occasion that Rembrandt made his famous painting.

Rembrandt van Rijn began to work as a professional portraitist a year before he created this painting. The group portrait of Dr. Tulp and seven members of the Guild of Surgeons established his reputation immediately. The viewer’s attention is focused on the doctor, who demonstrates the anatomy of the muscles of the arm.

The body used for these public autopsies was usually that of a criminal, in this case, Adriaen het Kint. His body glares without strong chiaroscuro and with the fine atmospheric quality that is combined with it, the picture would lose its intensity.

Anatomy lessons were a social event in the 17th century, taking place in lecture rooms that were actual anatomical theaters, with students, colleagues, and the general public being permitted to attend after paying an entrance fee.

The names of the sitters portrayed in the picture are listed on the piece of paper held by the man at the back. They paid a lot of money to be painted there, now it seems it was a wise decision… What’s more interesting, the more central figures (in this case also Dr. Tulp) probably paid more, even twice as much.

One person is missing: the preparator, whose task was to prepare the body for the spectacle. In the 17th century, an important scientist such as Dr. Tulp would not be involved in menial and bloody work like dissection, and such tasks would be left to others. It is for this reason that the picture shows no cutting instruments. Instead, we see in the lower right corner an enormous open textbook on anatomy, possibly the 1543 De humani corporis fabrica (On the Fabric of the Human Body) by Andreas Vesalius.

Medical specialists have commented on the accuracy of muscles and tendons painted by the 26-year-old Rembrandt. It is not known where he obtained such knowledge; it is possible that he copied the details from an anatomical textbook.