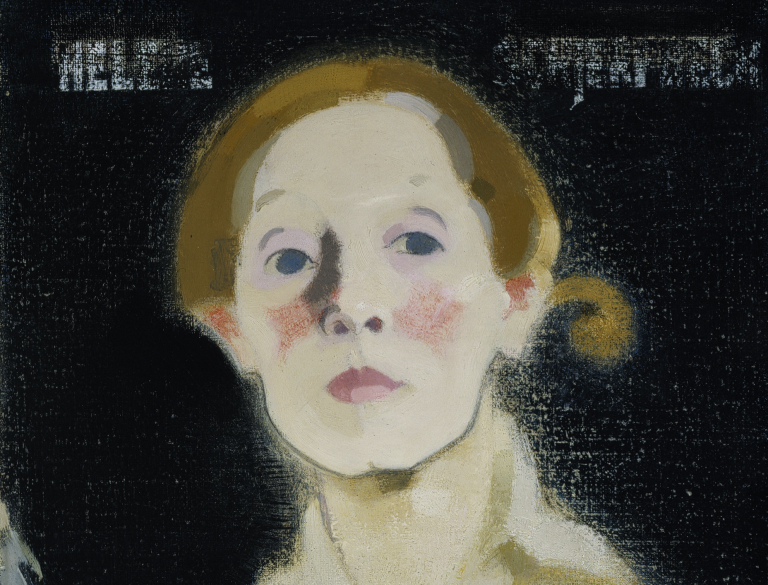 In DailyArt app, we always wanted to promote art that is amazing, but not very widely known. Because of multiple reasons, art created by women artists was largely forgotten or ignored by official art history. By “official”, I mean universities, coursebooks, museums, etc.

When I finished university after years of being trained to become an art historian, I’d never heard of Hilma af Klint, Rachel Ruysch, Artemisia Gentileschi, or Mary Cassatt. It is horrid. Fortunately, things are changing now, and more and more spotlight is given to these talented artists. Also, we wanted to contribute to this and, both on DailyArt app and DailyArt Magazine, we regularly feature and discover women artists from all over the world. As it is the 10th birthday of DailyArt app, time to recall our favorite women artists featured in the app!

One more thing before we start: you can download DailyArt app for free on iOS and Android.

The second thing before we start: we have started a crowdfunding campaign to develop a brand new DailyArt app. It will be much more intuitive, better performing, and will have some new additional extra features, which all art lovers would love. Please consider helping us reach our goal and continue our mission here.

Giovanna Garzoni (1600–1670) was an Italian painter of the Baroque period and another female artist we don’t know much about. Both of Garzoni’s parents were of Venetian origin and are believed to have come from a long line of Venetian painters. She began her career painting religious, mythological, and allegorical subjects but gained fame for botanical motifs painted in tempera and watercolor. Garzoni’s refined interpretation of plants and animals suited the taste of her aristocratic patrons, such as the Medici family, and could be found decorating their villas. Her works were praised for their precision and balance, and for the exactitude of the objects depicted. It is noted by several historians that her pieces were so well received by the public that she was able to ask any price for them.

Artemisia Lomi aka Artemisia Gentileschi (July 8, 1593–ca. 1656) was an Italian Baroque painter. She was the first woman to become a member of the Accademia di Arte del Disegno in Florence. She was known for her skill in the use of color.

Gentileschi specialized in studies of strong and tormented women from mythology, parables, or the Bible—victims, suicides, warriors. Her works are often interpreted in the light of one tragic event in her life. As a young woman, she was raped by her father’s friend, an artist named Agostino Tassi. The trial lasted several months, during which she was tortured with thumbscrews, presumably with the intention of verifying her testimony. The court exiled Tassi from Rome, but the order was never enforced.

For many years, Artemisia Gentileschi was something of a curiosity, but today she is considered one of the most progressive and expressive painters of the generation following Caravaggio.

Maria Sibylla Merian (April 2, 1647–January 13, 1717) was a German-born naturalist, scientific illustrator, and one of the first European scientists to observe insects directly.

Merian started to collect insects as an adolescent and, at age 13, she bred silkworms. In 1679, she published the first of a two-volume series on caterpillars; the second volume followed in 1683. Each contained 50 plates engraved and etched by her. In 1699, Merian traveled to Dutch Surinam to study and record tropical insects. In 1705, she published the Metamorphosis Insectorum Surinamensium, which included some 60 engravings with descriptions illustrating the different stages of insect development that she had observed. She is considered among the most significant contributors to the field of entomology. In 1701, due to malaria, Merian returned to Amsterdam. She died a pauper as she couldn’t work owing to a stroke that had rendered her partially paralyzed.

Marie-Denise Villers (née Lemoine; 1774–August 19, 1821) was a French painter who specialized in portraits. Along with her two sisters and cousin, she was trained as a portraitist. Very little is known about her. In 1794, she married a student of architecture, Michel-Jean-Maximilien Villers. Her husband supported her art during a time when many women were forced to give up professional artwork after marriage.

She first exhibited her works at the Paris Salon of the Year VII (1799). Villers’ most famous painting, Portrait of Charlotte du Val d’Ognes, was wrongly attributed for more than a century to Jacques-Louis David until 1995, when art historian Margaret Oppenheimer successfully argued that Villers was the author of the work. Some scholars now argue that it may be not a portrait of somebody else, but a self-portrait of Villers. Her later life between the time of her last dated painting (1814) and her death in 1821 remains unknown.

Mary Stevenson Cassatt (May 22, 1844–June 14, 1926) was an American painter and printmaker. She was born in Allegheny City, Pennsylvania, but lived much of her adult life in France, where she first befriended Edgar Degas and later exhibited among the Impressionists.

Cassatt began studying painting at the Pennsylvania Academy of the Fine Arts in Philadelphia at the age of just 15. She moved to Paris in 1866 and exhibited 11 of her paintings with the Impressionists in 1879. The show was a huge commercial and critical success, and similar exhibits were staged in 1880 and 1881.

The artist gained renown for her portraits. She was especially drawn to women in everyday domestic settings, in particular mothers with children. Her portraits were unconventional in their directness and honesty.

Mary Edmonia Lewis (c. July 4, 1844–September 17, 1907), “Wildfire”, was an African American sculptor of mixed African-American and Native American (Ojibwe) heritage. Born free in Upstate New York, she worked for most of her career in Rome, Italy. She was the first African-American sculptor to achieve national and then international prominence. She began to gain prominence in the United States during the Civil War; at the end of the 19th century, she remained the only Black woman artist who had participated in and been recognized to any extent by the American artistic mainstream.

Her work is known for incorporating themes relating to Black people and Indigenous peoples of the Americas into Neoclassical-style sculpture.

Uemura Shōen (April 23, 1875–August 27, 1949) was the pseudonym of an important female artist in Meiji, Taishō, and early Shōwa period Japanese painting. Her real name was Uemura Tsune. Shōen was known primarily for her Bijinga paintings of beautiful women in the Nihonga style, although she also produced numerous works on historical themes and traditional subjects.

As a child, Shōen drew pictures and exhibited considerable skill at drawing human figures. She became obsessed with the ukiyo-e works of Hokusai. Her mother supported her decision to pursue an artistic career. Shōen was sent to the Kyoto Prefectural Painting School. She also began studying the Kanō and Sesshū schools of painting, and Suzuki was so impressed that he gave her the first kanji of his own pseudonym of “Shōnen” in recognition of her talent. This was an exceptional breakthrough for the times; however, for a while, her reputation was tainted as she was suspected of a liaison with her teacher, which may have been true. Soon afterward, she gave birth to an illegitimate son (the future painter Uemura Shōkō) whom she raised as a single mother. She later gave birth to a daughter, and likewise never revealed the name of the father.

Shōen drew from her artistic training and her personal interest in woodblock prints and older painting styles to develop new techniques and styles of composition with a broad range of subjects. Themes and elements from traditional Noh drama frequently appeared in her works, but images of beautiful women (bijinga) came to dominate her works. Eventually, her works would combine the themes of both Noh and women together into a single composition.

Helene Schjerfbeck (July 10, 1862–January 23, 1946) was a Finnish painter. She is most widely known for her Realist works and self-portraits, and less well known for her landscapes and still lifes. Throughout her long life, her work changed dramatically. In 1879, at the age of 17, Schjerfbeck won third prize in a competition organized by the Finnish Art Society, and in 1880, her work was displayed in an annual Finnish Art Society exhibition. She set off to Paris later that year, after receiving a travel grant from the Imperial Russian Senate. In the 1890s, Schjerfbeck started teaching regularly in Finland at the Art Society drawing school, but in 1901, she became too ill to teach and in 1902, she resigned her post. She moved to Hyvinkää, all while taking care of her mother who lived with her (the mother died in 1923). While living in Hyvinkää, she continued to paint and exhibit. She continued to paint actively even during her last years; the famous series of self-portraits was painted in Saltsjöbaden.

Amrita Sher-Gil (January 30, 1913–December 5, 1941) was an eminent Indian painter, sometimes known as “India’s Frida Kahlo.” Born to a Punjabi Sikh father and a Hungarian-Jewish mother, she is today considered an important woman painter of 20th century India, whose legacy stands on par with that of the Masters of Bengal Renaissance. She is also the “most expensive” woman painter of India.

Though her artworks mainly depicted Western style and culture during the initial stages of her career, she began to rediscover herself by depicting Indian subjects. She traveled to different parts of India, France, and Turkey and managed to incorporate ideas gained from different techniques into her own works.

In 1941, at age 28, just days before the opening of her first major solo show in Lahore, Sher-Gil became seriously ill and slipped into a coma. She later died, leaving behind a large volume of work. The reason for her death has never been ascertained.

María Izquierdo was a Mexican painter. She was born María Cenobia Izquierdo Gutiérrez in San Juan de los Lagos in the state of Jalisco. Always interested in art, Izquierdo spent much of her time alone, teaching herself new art techniques. When she and her family moved to Mexico City in the 1920s, she acted on her passion and left her husband. In the early 1920s, Izquierdo began associating herself with the Movimiento Pro-Arte Mexicano and the Contemporáneos. One of her colleagues and close friend, Lola Álvarez Bravo, remembers her as “a very cheerful woman with a wolf spirit… like a jar full of pure fresh water… The inclination that Izquierdo had for folklore was not that of a distant viewer. She seemed rather to be an insider, like one more folk element.”

María Izquierdo is known for being the first Mexican woman to have her artwork exhibited in the United States. She committed both her life and her career to painting art that displayed her Mexican roots and held her own among famous Mexican male artists: Diego Rivera, José Clemente Orozco, and David Alfaro Siqueiros.

Dear DailyArt Magazine Reader, On August 22nd, 2012, on App Store and Google Play, we published the first version of the DailyArt app. This free iOS...

So, it happened. 10 years ago we launched the DailyArt app – a small mobile app which started everything. Aiming to give joy, inspiration, and a...

Today DailyArt Magazine celebrates its 6th birthday! Since then, we have been providing you with a daily dose of art, knowledge and beauty! Our...

As an art lover I always regret that I will never own a gallery of all the masterpieces which I admire most. But to be honest, I think it is a good...