The Fabulous Sculpture and Mysterious Life of Edmonia Lewis 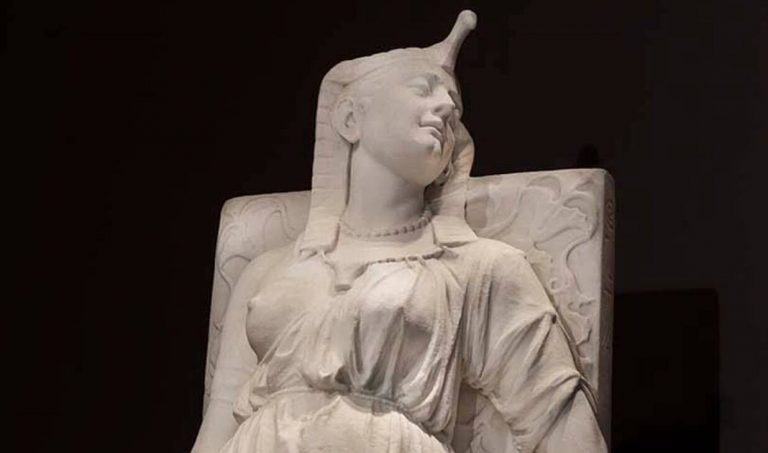 Edmonia Lewis (c. 1844-1907) was quite a force of nature. She was an African American and Native American woman who became an internationally-respected sculptor in the prejudiced 19th century. Her life was fascinating, but it’s difficult to uncover: every source tells a slightly different story. Only a few primary documents, like letters or journals of hers, have survived. Like many other artists throughout history, she was adept at telling her story differently according to her audience.

She was most likely born in 1844, either in New York or in Ohio. Her father was a free African American, and her mother was a member of the Chippewa/Ojibwa people. As a young orphan, she grew up with her mother’s family. Lewis went to Oberlin College, which was a pretty big deal for a woman and a person of color at this time. Unfortunately, she did not graduate because of racist incidents.

Moving to Boston, she briefly studied with an established sculptor before striking out on her own. She started making portrait busts of prominent abolitionists, and she earned enough money selling plaster casts of them to finance a trip to Italy. Lewis settled in Rome, where she lived for the rest of her life. She ran in American expat sculptor circles and became prominent. However, she eventually fell out of the historical record. Most scholars believe that she died in 1907 in London.

Lewis didn’t have much formal artistic training, but it’s pretty clear that she made the most of what she got. Her sculpture is skillful and impressive. She worked in the then-popular Neoclassical style, making naturalistic, figurative, white marble sculptures derived from the tradition of ancient Greece and Rome.

Her subject matter most commonly featured African Americans and Native Americans. She made a series of sculptures based on Henry Wadsworth Longfellow’s 1855 The Song of Hiawatha, including Hiawatha‘s Marriage shown above. Neoclassical sculptures of Native Americans weren’t uncommon, but Lewis’s respectful, human representations clearly contrast with idealized and exoticized images by other artists.

She masterfully combined the New World subject matter with the Old World style. Her portrayals of African Americans are even more striking. Her touching Forever Free depicts an African American couple breaking out of their shackles and realizing their freedom.

Edmonia Lewis also made some unique sculptures of historical and Biblical African women. These include Hagar in the Wilderness, a sympathetic portrayal of an Egyptian slave or servant who was exiled for having her master’s child. Then there’s Lewis’ masterpiece, The Death of Cleopatra. It’s a massive representation of Egypt’s last pharaoh killing herself with her famous asp. Like in almost every other area of her life, Lewis broke with convention by depicting Cleopatra after her suicide, rather than just before it. Her sculpture portrays Cleopatra as commanding, even in death, rather than sensual.

The sculpture was a big hit at the Philadelphia Centennial Exposition in 1876. The dead queen’s inelegant slump shocked many viewers but also showed off Lewis’s skill in naturalistic representation. That naturalism isn’t so apparent today, because the sculpture has been through a lot since the 1876 Exposition. It disappeared for a century, spent much of that time outside in the elements, and was only rediscovered in 1988. Some of Lewis’s other great sculptures are still lost, but the works that survive are memorable.

The best place to see the sculptures of Edmonia Lewis is Smithsonian American Art Museum in Washington DC.

You can check out Edmonia Lewis’ virtual exhibition in Google Arts & Culture.