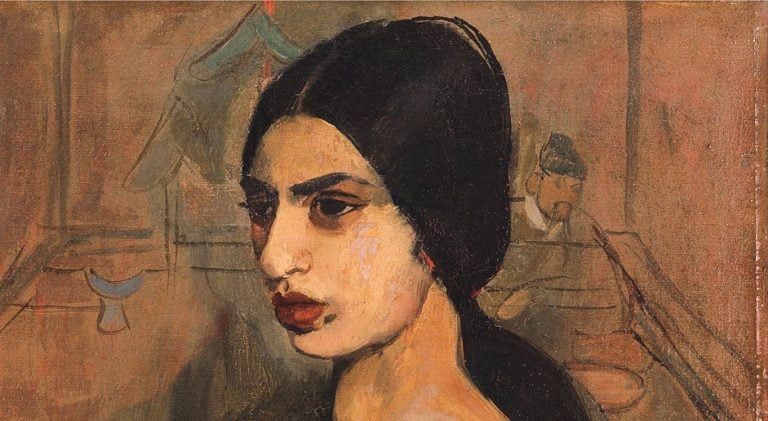 Amrita Sher-Gil lived a short but interesting life. Her artistic heritage is rich and impressive. Sher-Gil is considered to be one of the most important painters of 20th-century India, and sometimes is called India’s Frida Kahlo.

Amrita Sher-Gil was born on 30 January 1913 in Budapest, Hungary. Her father was a Sikh aristocrat and a scholar in Sanskrit and Persian, her mother, Marie Antoinette Gottesmann was a Hungarian-Jewish opera singer.

Sher-Gil spent most of her early childhood in Budapest but in 1921, her family moved to Summer Hill, Shimla in India where she received a proper education. She had already been painting from the age of five but she formally started learning painting at age of eight.

At 16, Sher-Gil sailed to Europe with her mother to train as a painter in Paris, first at the Grande Chaumiere under Pierre Vaillant and Lucien Simon and later at the École des Beaux-Arts. She was inspired by European painters such as Paul Cézanne and Paul Gauguin.

In 1932, Sher-Gil created her first important work, Young Girls, which led to her election as an Associate of the Grand Salon in Paris in 1933, making her the youngest ever and the only Asian artist to have received this recognition.

But during her stay in Europe Amrita Sher-Gil missed India. In 1934 she “began to be haunted by an intense longing to return to India.” As she wrote, she started “feeling in some strange way that there lay my destiny as a painter”. She began a quest for the rediscovery of the traditions of Indian art. Later she wrote to her friend: “I can only paint in India. Europe belongs to Picasso, Matisse, Braque… India belongs only to me.”

Sher-Gil married her Hungarian first cousin, Dr. Victor Egan in 1938 and moved with him to India to stay at her paternal family’s home in Saraya in Gorakhpur, Uttar Pradesh.

In Saraya, she painted the leisurely rhythms of life in rural India. Although acclaimed by art critics Karl Khandalavala in Bombay and Charles Fabri in Lahore as the greatest painter of the century, Sher-Gil’s paintings found few buyers.

In 1941, just days before the opening of her first major solo exhibition in Lahore, she became seriously ill and slipped into a coma. She died around midnight on 6 December 1941. The reason for her death is still unknown – some suggested a failed abortion and subsequent peritonitis. Her mother accused her doctor husband Victor of having murdered her. On the day after her death, Britain declared war on Hungary, and Victor was sent to jail as an enemy of the state.