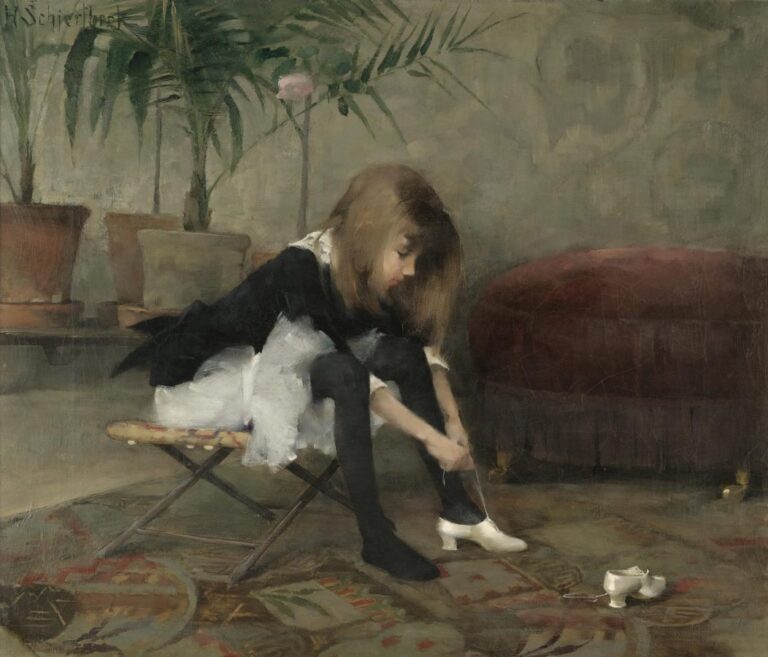 I want to share with you my latest discovery: Helena Sofia Schjerfbeck, an unknown gem of Finnish painting. She began during the fine-de-siecle and painted until the late 1940’s. Her very idiosyncratic and personal style makes her difficult to categorize. Especially that it evolved throughout her life: some of her works are very Realist, others very Expressionistic. The Independent of London characterised her work as follows: “Imagine the life of Frida Kahlo yoked to the eye of Edvard Munch, and you’ll begin to get the measure of this oeuvre…”.

This is probably her most famous painting as it fetched £3,044,500 at a 2008 Sotheby’s London sale. It depicts Helene’s cousin Esther, executed in a Realist style which shows the clear influence of Edouard Manet, Edgar Degas, Berthe Morisot, and Mary Cassatt. Esther had extremely long legs and for that reason the painting was nicknamed “The Grasshopper”.

This portrait of a young girl bears influences of Klimt and his focus on female portraiture and golden backgrounds. The subtle rendering of the girl’s face suggest the ephemeral atmosphere accentuated by her closed eyes. Is she praying, is she dreaming? We can only guess what this painting means.

Very soon, however, Scherfbeck’s painting evolved from a melancholic Symbolism and Realism with impressionistic influences, to a very personal style, which carried the signs of Expressionism. This portrait is quite a late one, she died in 1946, but it brilliantly illustrates the radical change in Helen’s style. There is no room for dreaminess here, we have hard-cut lines of the distorted and simplified face,  whose unhealthy paleness is emphasized by the pink background.