Why is Klimt Famous? 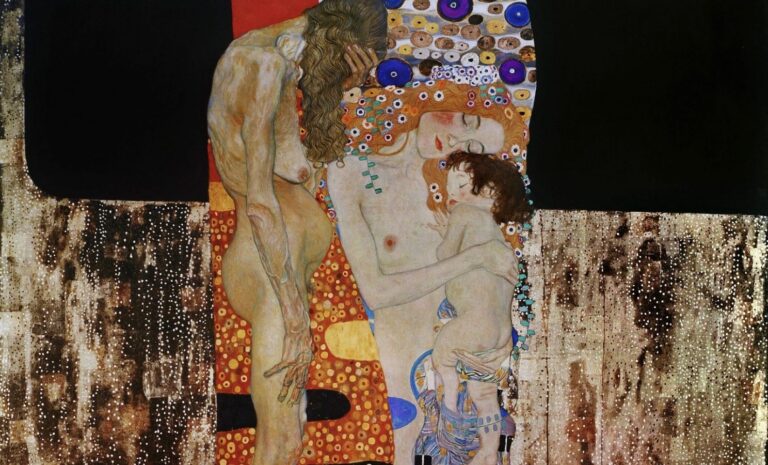 Gustav Klimt, born in Austria in 1862, is celebrated as one of the most valued artists in the history of art. But, why is Klimt famous? Why exactly do we value his work? And what role did he play in the history of modern art and culture?

Klimt’s paintings are among the most expensive in the world

In 2006 Ronald Lauder, a collector of Austrian expressionist art and the co-founder of the Neue Galerie, the expressionist museum in New York City, spent the extraordinary sum of $135 million to purchase a single painting: Klimt’s portrait of Adele Bloch-Bauer, a Viennese socialite and patroness of the arts. This marked the painting, for a short while, as the most expensive painting in the world.

Klimt’s works might be exclusive, but they’ve also come to adorn the cheapest tat – from mugs, key-rings and tea towels, you can find about anything with Klimt printed on it.

There’s, definitely, a certain quality in his work that attracts not just art cognoscenti, but a lot wider public, regardless of whether they are familiar with the artists’ work or reputation. Everybody seems to want a piece of Klimt.

Is it the Gold?

Alfred Weidinger, the vice-director of the Belvedere Museum in Vienna, which holds the biggest collection of Klimt, and one of the foremost experts on Klimt, over the course of his career has found the artist’s appeal to be truly universal. In 2009, when he was travelling around Africa, he met a woman, in the rural south of Ethiopia, who was wearing a T-shirt of Klimt’s The Kiss.

She explained that an Italian photographer who had visited her village earlier offered her to choose from three T-shirts as a thank-you gift. Although she knew nothing of the artist, she chose the Klimt because she loved the gold in the image.

According to Weidinger, it’s the metallic, luminous and decorative effect of Klimt’s work that attracts people.

Being a son of a goldsmith, he understood the material like no other among his contemporaries. Later, as a poor student at the School of Applied Art in Vienna, he was inspired by the dazzle of Byzantine Art. His early works often emulated the effects and colours of precious metals and stones. By the time when money became no issue, he used an actual gold in his works.

The decorative and luminous effects of the paintings might make any gaudy item look expensive. But the value of the masters’ work lies beyond the opulence of gems and gold. Klimt was one of the fathers of Viennese Modern art, who broke away from the artistic past.

What do we mean by artistic past? It’s kind of a philosophical question. The conservative Art Academies persisted that the purpose of art was to recreate the three-dimensional reality onto the two-dimensional surface of the canvas, just the way we see it in real life. This tradition came from the 14th century Italian Renaissance movement, and the technique of achieving it is known as the perspective. Therefore, a frame of a painting constitutes a window for the viewer standing in front of it.

However, Klimt refused to copy what’s in front of him. He was contemporaneous with the studies of scientists, biologists and psychologists who had changed the course of study of human evolution and mind. Their work influenced Klimt’s art, as it did much of the culture of Vienna during the period between 1890 – 1918.

Klimt realised that a traditional way of looking at reality wasn’t enough for expressing the breakthrough discoveries beyond our visible world. So he started neglecting the rules of perspective, by blocking his canvases with patterns, shapes and symbols. That’s why Klimt’s style made him the innovator and major contributor to the emergence of Austrian Modernism in art.

Vienna at the beginning of the 20th century was a capital of European culture and science. Unlike, New York, London or Paris where the members of one field clique almost exclusively with the community of their own professions, Viennese artists, writers, scientists, physicians preferred to mix and mingle in diverse and cross-disciplinary circles. Gymnasiums and universities were epicenters of latest scientific investigations, and their achievements spread way beyond the walls of the institution. Socialite Berta Zuckerkandl and her husband, Emil Zuckerkandl, both people of science, often held parties, meetings and lectures for the Viennese intelligentsia. Klimt was a frequent guest.

In his Hope, I naked woman stands in front of us in her final stage of pregnancy. Art historian Emily Braun has noticed that the dark-blue, primitive, sea-creature-like form winding behind the woman’s swollen belly echoes a prevailing view at that time, namely, that the development of a human embryo follows the same path as human evolution. This view was suggested by the German biologist Ernst Haeckel, who believed that human embryos possess gills and tails reminiscent of their primitive, fishlike ancestors but lose those features as they develop.

Back to the famous portrait of Adele, the shapes and patterns on Adele’s dress are not just decorative. Instead, they symbolize male and female cells: rectangular sperm and ovoid eggs. As the art historian Emily Braun puts it:

“These biologically inspired fertility symbols are designed to match the sitter’s seductive face to her full-blown reproductive capabilities,”.

Finally, one of his most famous works, Danae, is also a full-blown celebration of female fertility and conception. Klimt incorporated the same biological symbols into his painting of Zeus coming to Danae. Here the artist transforms the shower of golden raindrops and black rectangles, symbolizing Zeus’s sperm, on the left side of the canvas into early embryonic forms, symbolizing conception, on the right side.

Through observing his friend, the aforementioned anatomist Emil Zuckerkandl, dissecting cadavers at the University of Vienna, Klimt gained the profound understanding of human body. As Eric Kandel wrote about Klimt’s work:

“…nude bodies [in Klimt’s works] stand just for itself, as a biological species subject to the same procreative laws as every other organism”.

Even after the scrutiny of Klimt’s work from a sterile biological point of view, we cannot escape the striking sensual aura his canvases create. That is to say, beneath all the intellectual reasoning, all of us are ruled by a sexual urge that most of us oppress but the very little of us can tame.

This is a playground of another Viennese giant – Sigmund Freud. Father of modern psychoanalysis and the contemporary of Klimt, he opened the door of the unconscious mind to modern science. Through his scrupulous study of dreams, and psychological conditions of his patients he teased out that the unconscious mind is mostly ruled by a man’s need for procreation (and the rest by his compulsion for aggressiveness).

There were many artists who studied female body. But Klimt’s nudes turned out too realistic, intimate, provocative and outrageous for his time.  What’s remarkable about Klimt, is that he too, like Freud, created a visual dialogue with his sitter in an attempt to understand female sexuality. Alias, unlike Freud, the notorious womanizer he is, his studies of the subject didn’t just end with a drawing session.

Nevertheless, through his work, he’s suggesting to regard the process of human reproduction and development in a naturalistic, evolutionary light. That’s why, he wasn’t just a painter, or a decorator, but also an innovative thinker of the past century.