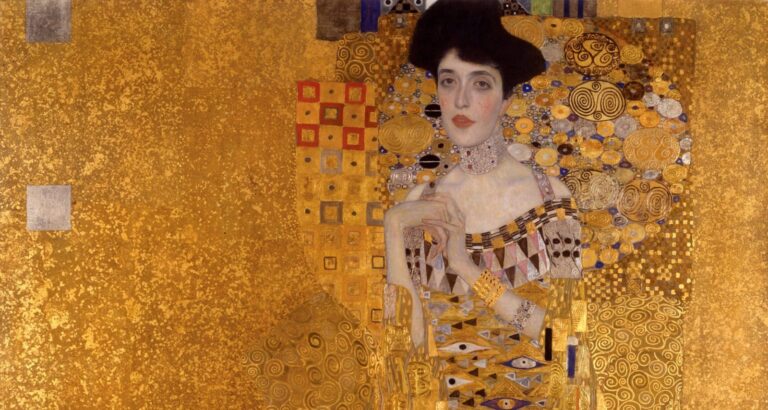 This portrait also known as Lady in Gold is one of two formal portraits that Gustav Klimt made of Adele Bloch-Bauer, an important patron of the artist. Adele was the wife of a wealthy industrialist in Vienna where Klimt lived and worked. The portrait was commissioned by her husband, Ferdinand Bloch-Bauer, a Jewish banker and sugar producer. The composition emphasizes Bloch-Bauer’s social position within Vienna’s cultural elite. Her towering figure, in opulent dress, is set against a jewel-toned backdrop of nearly abstract patterned blocks that suggest a richly decorated domestic interior. Beautiful, isn’t she?

During the II World War the Nazis took possession of this portrait along with other works of art in the Bloch-Bauer family’s collection. In 2006, after years of legal negotiations, the works were returned to the Bloch-Bauer heirs and subsequently sold to other collections. In November 2006, Christie’s auction house sold the portrait at auction for almost $88 million, the fourth-highest priced piece of art at auction at the time.

The portrait is the final and most fully representative work of Klimt’s golden phase. It was the first of two depictions of Adele by Klimt – the second was completed in 1912; these were two of several works by the artist that the family owned. Adele died in 1925; her will asked that the artworks by Klimt were to be left to the Galerie Belvedere, although these belonged to Ferdinand, not her.

Adele Bauer was from a wealthy Jewish Viennese family. Her father was a director of the Wiener Bankverein, the seventh largest bank in Austria-Hungary, and the general director of Oriental Railroads. In the late 1890s Adele met Klimt, and may have begun a relationship with him. Opinion is divided on whether Adele and Klimt, who was a famous womanizer had an affair. Some considered that Adele was the only society lady painted by Klimt who is known definitely to be his mistress, but like often in such cases, there are no real evidence for that.

Adele’s parents arranged a marriage with Ferdinand Bloch, a banker and sugar manufacturer; Adele’s older sister had previously married Ferdinand’s older brother. Ferdinand was older than his fiancée and at the time of the marriage in December 1899, she was 18 and he was 35. The couple, who had no children, both changed their surnames to Bloch-Bauer. Socially well-connected, Adele brought together writers, politicians and intellectuals for regular salons at their home.

The couple shared a love of art, and patronised several artists, collecting primarily nineteenth-century Viennese paintings and modern sculpture. Ferdinand also had a passion for neoclassical porcelain, and by 1934 his collection was over 400 pieces and one of the finest in the world.

The history of the Portrait of Adele Bloch-Bauer I and the other paintings taken from the Bloch-Bauers has been described in the 2012 book [easyazon_link identifier=”1101873124″ locale=”US” tag=”dailyartdaily-20″]The Lady in Gold: The Extraordinary Tale of Gustav Klimt’s Masterpiece, Portrait of Adele Bloch-Bauer[/easyazon_link], by the journalist Anne-Marie O’Connor which was dramatised in 2015 for the film Woman in Gold starring Helen Mirren and Ryan Reynolds.